The human bicycle, a SELFIE during the match and an elaborate bowling routine in Estonia… If Toni Kroos hates Aubamayang’s ‘nonsense’ routines, what would he make of THESE celebrations?

Toni Kroos does not like them but when it comes to whacky, pre-planned, elaborately choreographed celebrations, football has seen plenty from the sublime to the outright ridiculous.

Kroos is now looking to put his social media spat with Arsenal’s Pierre-Emerick Aubameyang behind him having branded the Gabon striker’s occasional mask-based goal celebrations as ‘nonsense’.

Aubameyang did not take kindly to the critique and snapped back but it got Sportsmail thinking. 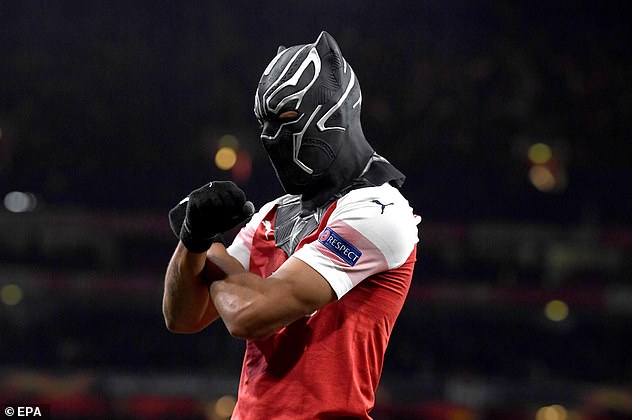 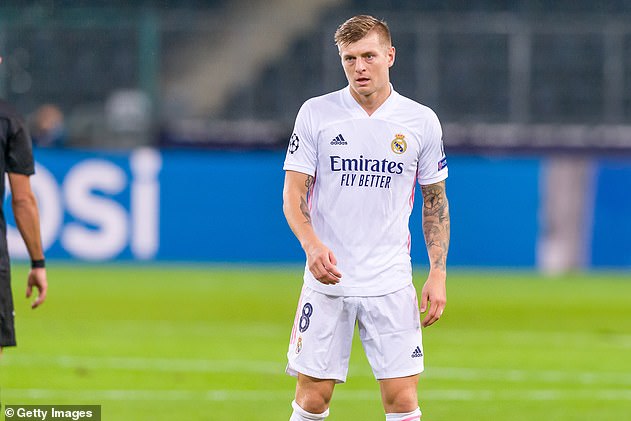 The German midfielder was dismissive of ‘nonsense’ celebrations that are choreographed

Aubameyang has favoured masks at both Borussia Dortmund and Arsenal but that is the tip of the iceberg when it comes to pre-planned routines.

Across the globe there have been human bicycles in Iceland, a bowling recreation in Estonia and a, frankly bizarre, mimic of a dog urinating at the 1994 World Cup.

Barcelona star Griezmann prefers to mimic moves from video game ‘Fortnite’ these days but he’s been partial to a choreographed celebration before.

Back in his Real Sociedad days Griezmann decided to hitch a ride after netting against Deportivo La Coruna.

Sociedad were 1-0 up and when Griezmann headed in their second goal he set off towards the stands to pull off his elaborate plan.

He leaped over the advertising hoardings and got into the driver’s seat of a response car that was parked on the track surrounding the pitch.

Soon he was boasting a full car as team-mates got in the passenger seats and Griezmann mimicked pushing the horn to navigate traffic. 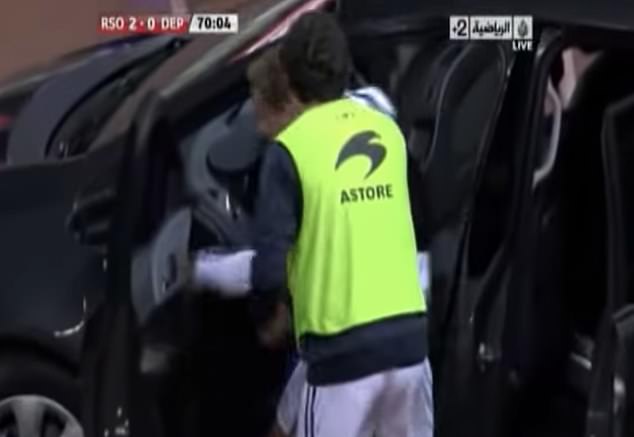 While at Real Sociedad, Antoine Griezmann ran off to a nearby car for his group celebration 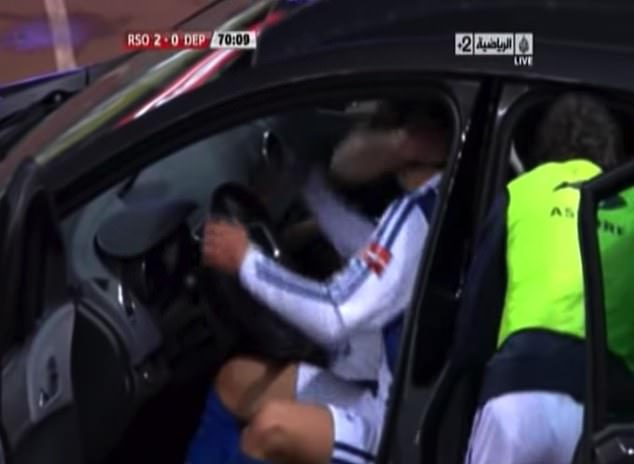 Sat behind the wheel as the designated driver, the French forward had a bit of fun with it

If Griezmann thought his car stunt was pushing the boundaries then he has not been watching enough Estonian football.

Having bundled home from close range for Nõmme Kalju, Japanese midfielder Hidetoshi Wakui was determined to mark his strike in style.

He frantically collected the ball from the net, ran to the touchline and has his teammates – who seemed more than willing to participate – formed themselves into a ten-pin formation.

Their form was somewhat questionable but the effort level is superb.

Wakui takes a breath, lines up his effort before bowling his team-mates all over with the match ball.

A strike… only there were nine players, rather than 10, in the formation so rules are rules. A spare for Wakui and Nõmme Kalju. 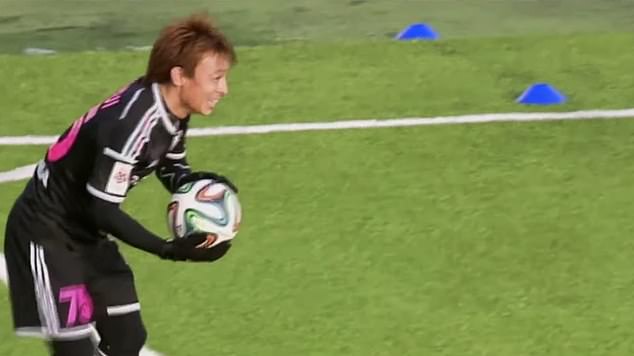 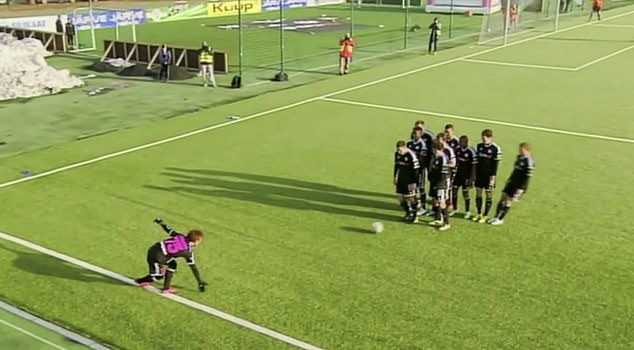 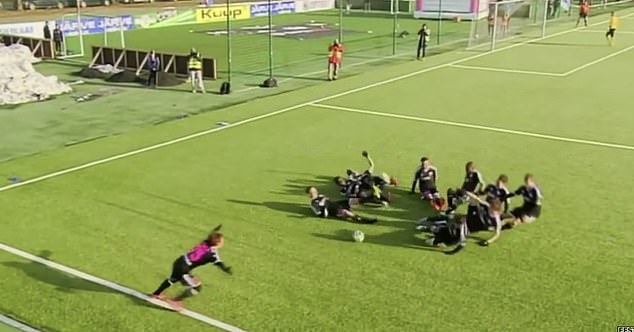 Kroos will be wincing at the opening two but this one is likely to leave him furious.

Icelandic team FC Stjarnan have carved out a reputation as being the Kings of the choreographed celebration and they could well have dominated this list.

But whittling it down we’ve landed on their Human Bicycle. A sublime piece of celebration engineering.

Thorvaldur Árnason bundled in at the back post and as soon as the ball struck the net the players were off.

This elaborate bicycle routine involving various members of the Stjarnan team contorting their body to fit the parts of a bike.

One formed the handlebars while others created a frame for which goalscorer Árnason was able to jump on and ride. As bonkers as it is brilliant. 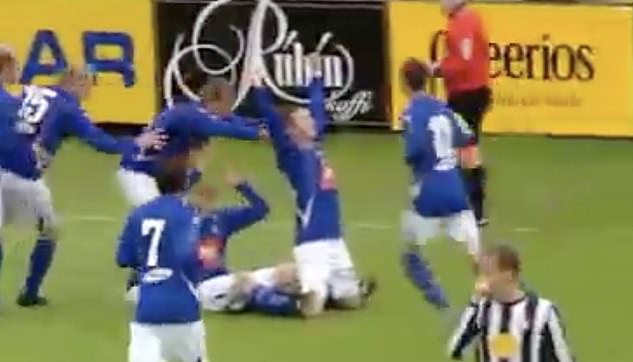 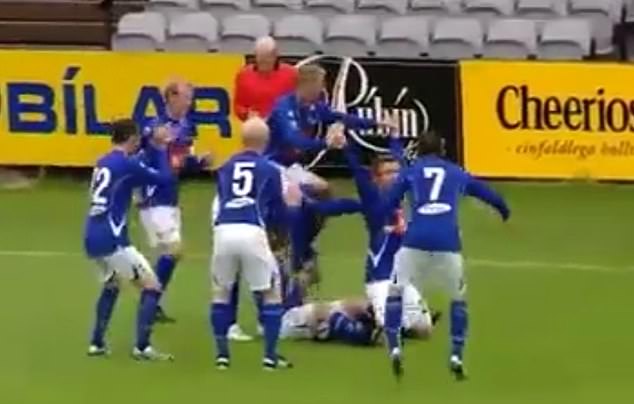 Mario Balotelli, like Griezmann, has history with pre-planning his celebrations.

It’s a gamble with no guarantees of netting but when he does, Super Mario rarely wastes his big moment.

He had the infamous ‘Why Always Me?’ undershirt in a Manchester derby at Old Trafford and became a meme after ripping his shirt off and flexing his muscles for Italy.

But his efforts took on a technological look when he uploaded a team selfie to Instagram moments after scoring for Marseille.

Florian Thauvin’s corner from the right was met acrobatically from Balotelli and if that wasn’t enough drama, he had an equally preposterous celebration to match.

A pitchside cameraman proceeded to give him an unlocked phone as he beckoned team-mates over. Turning their back on fans, Balotelli and his team-mates took a selfie which was uploaded to social network site Instagram.

Thankfully, they won the game 2-0. It would have been very awkward otherwise… 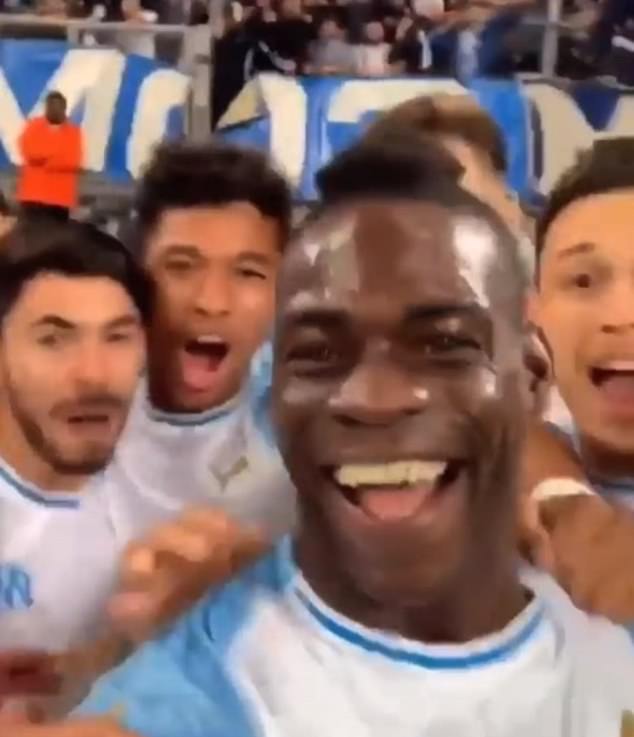 This one definitely leans more towards bizarre rather than brilliant. Like most things, celebrations are always trial and error and on this occasion Finidi George got it slightly off.

Rolling the clock back to the 1994 FIFA World Cup for this one as Nigeria took on Greece.

The game was finely poised heading into half-time when after a lung-bursting counter-attack, George was played in and he superbly chipped the Greece goalkeeper Christos Karkamanis.

Then things took a turn.

George got down on all fours to mimic a dog before he pretended to urinate in the popular pet’s fashion by lifting up his right leg.

Nobody quite knew how to react and to the surprise of very few, the urinating dog has not stood the test of time. 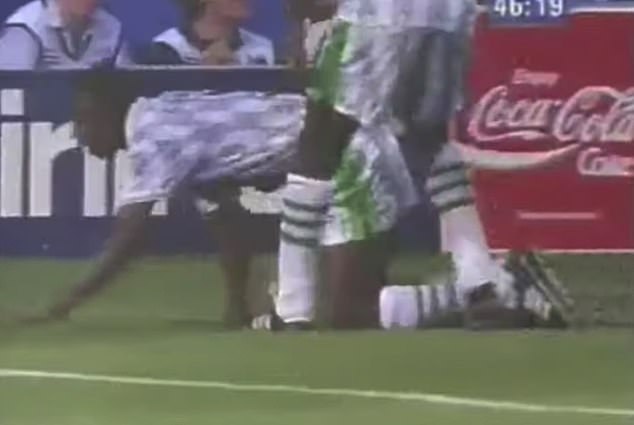 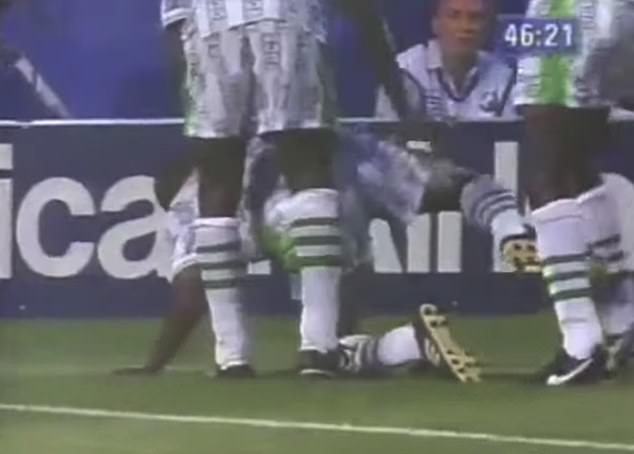 Finidi George scored and proceeded to act like a dog, even pretending to urinate on the pitch

They see me rolling…

Now we cross to Colombia inn 2017 where one player risked the wrath of sponsors by wrapping himself up in the pitchside mat.

Kevin Londono, of Jaguares FC, knew exactly what he was doing after he found the back of the net.

Taking on Santa Fe in Bogota, Londono was afforded the easiest of tap-ins to make it 2-0 and secure the victory.

What followed was the closest thing the stadium had seen to a human burrito as he lay on a sponsors’ mat before rolling himself up.

He looked delighted with his ingenuity. The referee – and beer company Aguila – no doubt begged to differ.

The celebration earned a yellow card, not that Londono cared. 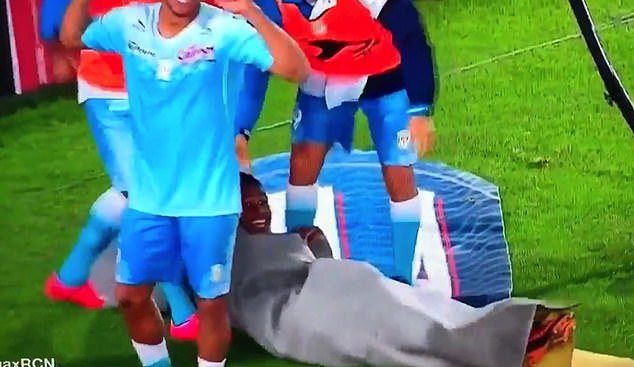 Even Kroos can raise a smile to this masterpiece by Jimmy Bullard.

A year on from Hull’s 5-1 drubbing at Manchester City – in which boss Phil Brown gave a team-talk on the pitch – Bullard was well prepped should he find the net.

And when the Tigers got a penalty to make it 1-1 Bullard buried it before urgently calling over team-mates.

The midfielder sat team-mates down and began pointing and gesturing at them much as Brown had done during that famous team-talk at the Etihad.

He risked the wrath of his manager but Brown’s sides were splitting at the stunt.

‘It was a fantastic celebration,’ Brown said. ‘Great comedy is about timing.

‘I couldn’t deliver my post-match speech as I was laughing so much. The whole thing was timed to perfection.’ 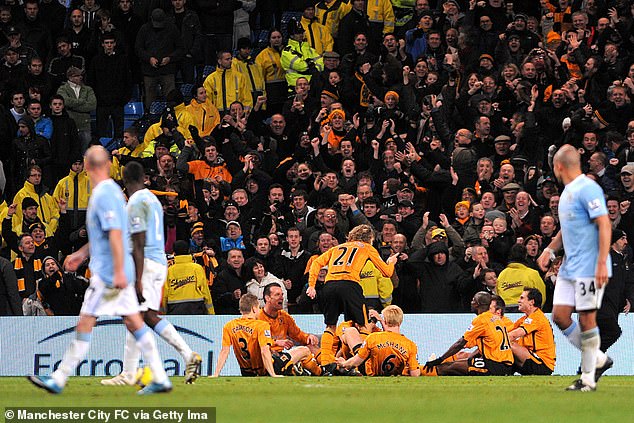 Who says footballers cannot poke fun at themselves?

As Manchester United hosted Tottenham at Old Trafford back in 2015, Wayne Rooney had an ace up his sleeve for if he scored – which he often did for United.

Prior to the game a video had surfaced in which Rooney appeared to be knocked unconscious – something he later clarified – in a kitchen boxing bout with good friend Phil Bardsley.

He was able to still feature against Tottenham and when he netted the knockout blow with United’s third in a 3-0 win he felt to mark it with a boxing-inspired celebration.

Speaking to boxing promoter Eddie Hearn on his No Passion, No Point podcast, he told all on a now iconic celebration.

‘The night with Bardo, we got home and we put the gloves on. It is something that we do quite regularly – but that one got out!’ he explained.

‘After I went down, the video stops but I wasn’t knocked out. We got up and carried on. I remember when we finished and the two of us sat there. My nose had gone and Bardo had blooding pouring out of his mouth. We were both looking at each other, saying: “What are we doing?”‘

It’s Liverpool-Everton in 1999. A fixture that, let’s be honest, doesn’t need to be spiced up.

With the game finely balanced, it was a high pressure situation that exploded into life when Fowler equalised.

He netted from the penalty spot at Anfield but, instead of going over to the home fans, he made a beeline for the visiting supporters.

Fowler had been taunted by Everton fans over alleged drug use – something which was never proven – and he had clearly picked up on it given the celebration that followed his penalty.

The striker got on his knees and pretended to sniff the goal line and it remains as outrageous now as it was then. Authorities were not amused.

The episode earned Fowler a four-match ban and a £32,000 fine – the largest fine given to a Premier League player at that time. Liverpool won 3-2, though, and Fowler has since said he has no regrets. It will never be forgotten. 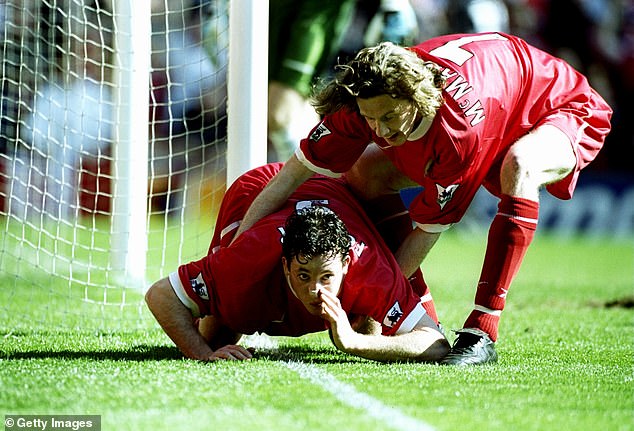 Getting your five a day of fruit and vegetables is important – but surely it can wait until AFTER the match?

Not in the case of Edmilson Ferreira, it seems.

This one goes back to 1998 and Atlético Mineiro were facing America in a fierce derby game.

Ferreira found the back of the net following a clever set-piece and as he ran off to celebrate he began rummaging in his shorts.

He then pulled out a carrot and started devouring the vegetable, much to the confusion of fans watching on.

Ironically it was the opposition that were nicknamed ‘Rabbits’ but take nothing away from Ferreira’s total commitment to a health kick. 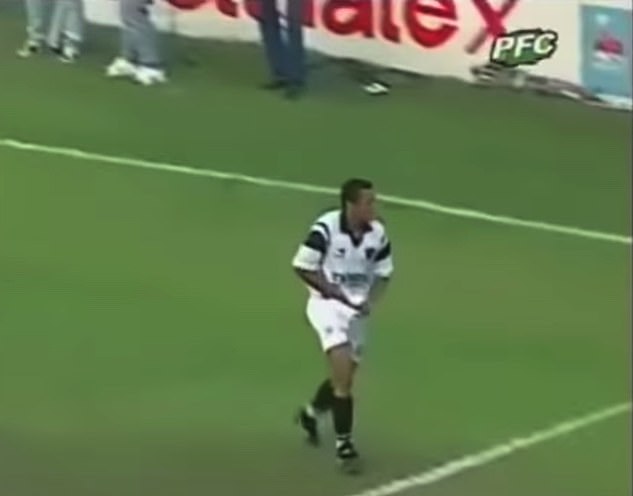 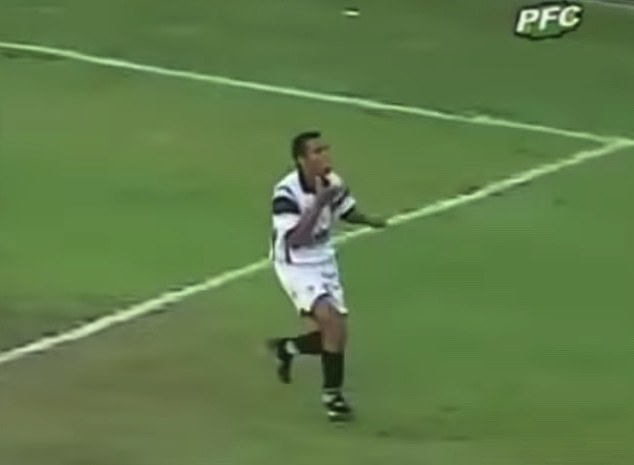