Socceroos coach Graham Arnold is thrilled with Aaron Mooy’s move to Celtic, which he says will ensure his midfield metronome is in the best possible shape for Australia’s World Cup mission in Qatar later this year. 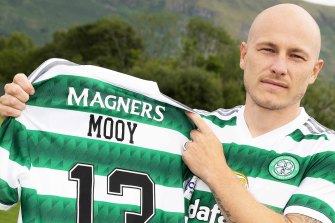 The 31-year-old actually defied his club’s orders to return to China for duty so he could take part in the Socceroos’ World Cup play-offs last month, and played every minute of their wins over the UAE and Peru – and was one of Australia’s best players – despite having played no competitive minutes since February.

After securing a release from his contract Mooy has now linked up with former Socceroos boss Postecoglou at Celtic, where he could play up to 22 competitive fixtures in the Scottish Premiership and the UEFA Champions League before he is due to fly into Doha for the World Cup.

Arnold is confident that gruelling schedule, together with Postecoglou’s demanding methods, will prime Mooy perfectly for what is to come.

“We all know that Ange will get the best out of Aaron, and get him fit and ready,” Arnold said. 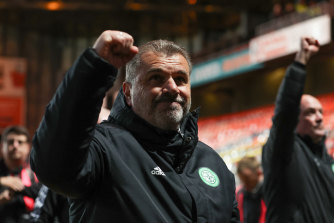 Ange Postecoglou’s Socceroos days might be done but he will still have a heavy influence over one of the team’s most crucial players.Credit:Getty

“It’s just great that he’s going to a club where they’re playing in the Champions League, and he’s going to get plenty of match minutes up there. Obviously they’re a good team, Celtic, and he’ll have his work cut out to get him in the starting XI, of course.

“But the fact that he’s going to be playing a lot of football before the World Cup is a relief for myself and, no doubt, all the Socceroo fans back here in Australia to know that Aaron’s got his club future sorted out.”

Arnold said he had jokingly suggested to Mooy during last month’s camp in Qatar that he should call Postecoglou to see if he would consider bringing him in at Celtic. Mooy sheepishly laughed it off, and Postecoglou himself even played down the likelihood of signing him when asked by Scottish media about the constant rumours linking him to the Bhoys – which, in retrospect, was seemingly an attempt at throwing them off the scent.

Mooy’s familiarity with Postecoglou, the Scottish league – where he played 21 games for St Mirren between 2010 and 2012 – and the city of Glasgow, where his wife is from and where his family has been living during his tenure in China, should ensure he will “hit the ground running” this season, Arnold said. 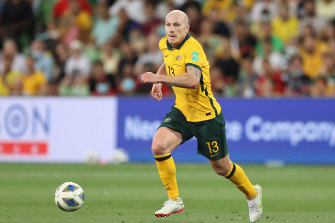 “He knows what to expect with Ange and Ange knows his game,” he said.

“Instead of a new player walking into a new club with a new coach who doesn’t really know his mindset and his character and qualities that well – it can take time for that new coach to get to know him. But he’s walking in on the other side of it, where the coach is very familiar with him, knows exactly what he’s getting.

“With better fitness, with more match rhythm, and under Ange, I expect that when he walks into Qatar he’ll be the leader that we need on the field.” 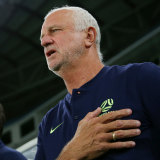 Fellow Socceroo Tom Rogic has been active on Instagram posting messages of support for Mooy’s shift to Celtic, where he left at the end of last season after a decade-long stint at the club.

But while Rogic has still not spoken to Arnold about why he missed the World Cup play-offs, sources close to the team have confirmed the 29-year-old has been in touch with the Socceroos’ medical staff regarding his fitness levels as he searches for a new club, giving rise to hopes he could soon return to the national team fold.

Other sources say Rogic, who was pictured in Sydney recently, has also declined recent approaches from A-League clubs as he continues his own search for a new home.

“I get asked about whether I’ve heard from him, but understand I leave him alone as well,” Arnold said.

“I know what Tommy’s like, I’ve known Tommy since 2010-11. I’m not pestering him and not sending him texts all the time. I sent one text quite a while ago to make sure that he was OK mentally and everything was fine. He replied, yes. And that’s it.

“I’m not his agent, I’m not his decision-maker of what career he chooses – that’s always the individual. I’m here to give advice, if advice is necessary. But at the end of the day it’s up to Tommy and his agent to find what’s best for Tommy and me as the national team coach, works with him from that.”

The Socceroos have only one more match at home, against New Zealand at Suncorp Stadium on September 22, before the World Cup.