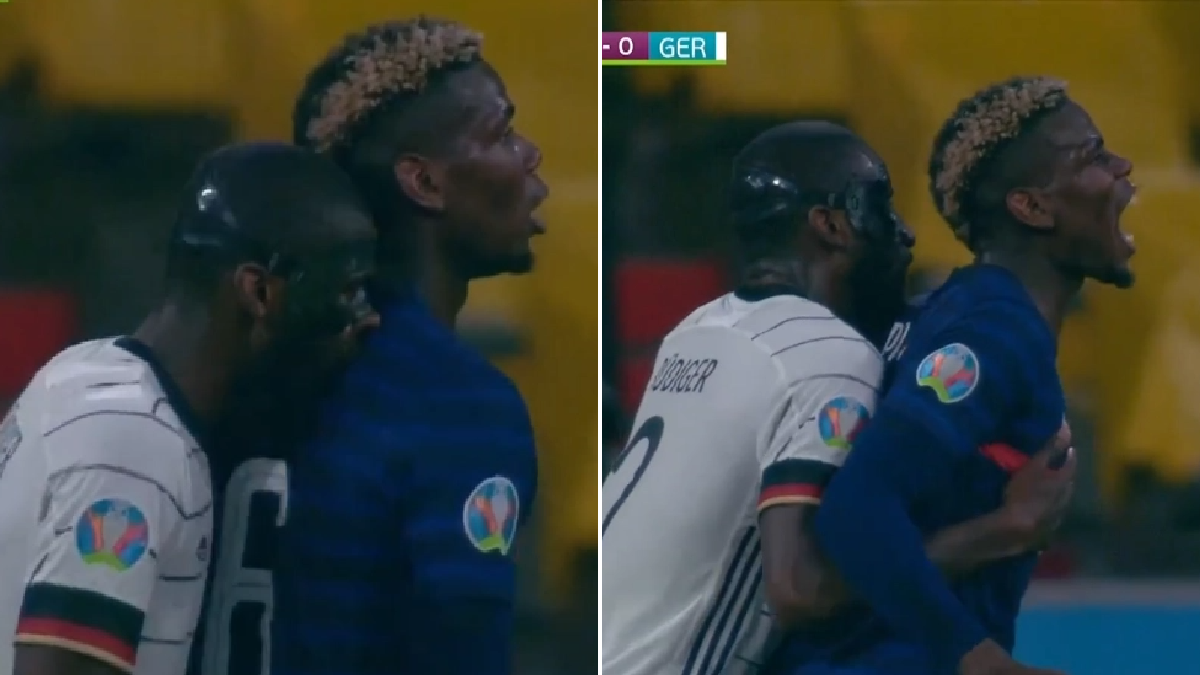 There were bizarre scenes at the end of the first half of France’s Euro 2020 clash with Germany as Antonio Rudiger appeared to try to bite Paul Pogba’s back.

The World Cup holders took a 1-0 lead in Tuesday evening’s match in Munich courtesy of an own goal from Mats Hummels, with the hosts struggling to break down France’s stubborn defence and looking vulnerable on the break.

Rudiger appeared to show his frustration just before the half-time whistle, trying to take a chomp out of Pogba as the two players tussled.

The Frenchman gave a belated scream and appealed to the referee, but the incident was not looked at further by VAR and Rudiger escaped unpunished.

‘When you see Pogba’s reaction, it felt like a bite,’ said Patrick Vieira on ITV Sport during the half-time interval.

‘But I don’t really understand what he was trying to do there really.’

Roy Keane chimed in: ‘I think it was more of a nibble than a bite. It wasn’t a proper bite was it? Silly thing to do though obviously.’

Ian Wright was equally confused by the incident, adding: ‘If he’s bitten him there he’s going to flinch.

Rudiger’s bite brought back memories of Uruguay’s Luis Suarez taking a chunk out of Italy defender Giorgio Chiellini at the 2014 World Cup in Brazil.

The then Liverpool striker was handed a four-month ban for his actions, though it was the third time he had bitten an opponent and Rudiger is unlikely to face such an extreme punishment if the incident is reviewed again after the match.

Prior to the game, Rudiger had said Germany needed to ‘be a little dirty’ in order to stop France, but seemed to go a little overboard with his use of the dark arts.