Arsenal captain Pierre-Emerick Aubameyang and fellow top players “wouldn’t touch Barcelona with a barge pole” due to the current state of the Catalan club, reckons former Gunners cult hero Perry Groves. Aubameyang is out of contract at Arsenal at the end of the upcoming season. Reports suggest the 31-year-old is close to committing his future to Mikel Arteta’s side but news of an extension is still yet to surface.

News of Lionel Messi wanting out of Barcelona earlier this week led to some fans fearing the Nou Camp club would look to sign the likes of Aubameyang as a replacement for the Argentina superstar.

Barcelona were linked with a move for Aubameyang in January following the injuries to Luis Suarez and Ousmane Dembele.

But Groves still believes the Gabon international will extend his stay at Arsenal and does not think he would want to go to Barcelona at the moment anyway. 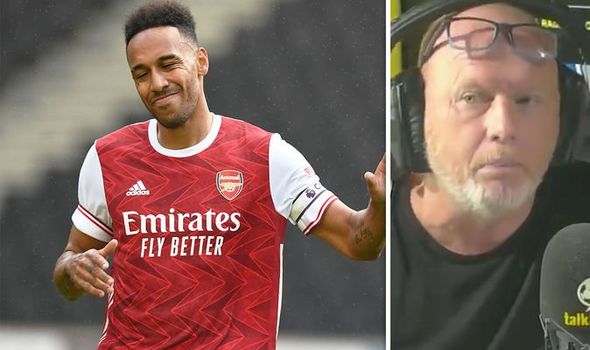 “Everything seems to be positive, coming out, and he’s got a good relationship with Mikel Arteta. There seems to be a little bit of trust there.

“Obviously, normally it’s his people in negotiations with Arsenal’s people, it’s nothing to do with Arteta and Aubameyang.

“So I’d be pretty confident that Aubameyang is going to sign.

“Obviously scoring the two winning goals and winning the FA Cup, that will make a difference, because it will give you more belief that this team is going in the right direction.

“So I’m not overly worried at the moment.

“I know someone mentioned about going to Barcelona with all the stuff that’s going on there, if Messi goes.

“But at this particular time, as a top player, you wouldn’t touch Barcelona with a barge-pole.”

“Lacazette will be the one, the asset,” Parlour said.

“You look at the assets they’ve got, there isn’t many really. They’ve got Aubameyang, but with him you’re not going to get as much as you’d like because, currently, he’s only got a year left on his contract.

“Probably the asset will be Lacazette. I know Juventus were interested in maybe buying him. Sometimes you have to lose a player to bring players in. You do need to freshen up the dressing room.”