Arsenal boss Mikel Arteta has confirmed that Bukayo Saka has suffered an injury after being taken off against Tottenham. The Gunners coach has also explained how much he knows about the England international’s problem.

Arsenal star Sara was hauled off against Spurs with an injury to his hamstring, Arteta has confirmed.

It comes after a morale-boosting victory over their biggest rivals – though this has somewhat soured there result.

In a match full of incidents, the white had of north London opened the scoring in spectacular fashion at the Emirates.

Erik Lamela tried an audacious ramona finish which squeezed past Bernd Leno at his far post. 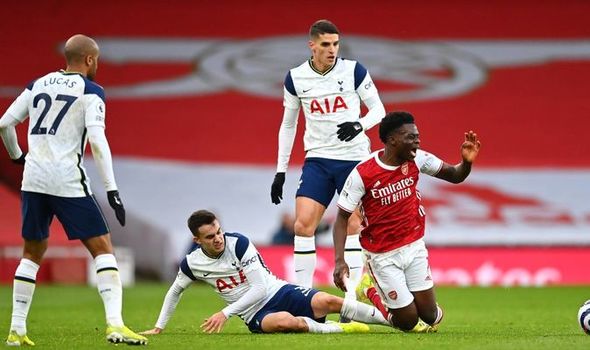 Arsenal had earlier hit the bar through Emile Smith Rowe with a thundering effort but their fortunes changed just before half-time.

Martin Odegaard, high on confidence after his stunner against Olympiacos in the Europa League this week, saw a deflected effort beat Hugo Lloris.

Spurs regressed further in the second half – one the home side dominated – and Jose Mourinho was furious after a penalty was awarded to the Gunners.

Despite Alexandre Lacazette missing the ball, Davinson Sanchez fouled him and Michael Oliver pointed to the spot.

The Frenchman stepped up and made no mistake to send Lloris the wrong way and score his 12th goal of the season.

Lamela went from goal hero to red card zero shortly after when he received a second booking for raising hands to Kieran Tierney’s face with 15 minutes to go.

However, one sour note was the withdrawal of Saka – who has been a key player for Arsenal this season.

The winger suffered a strong challenge from Sergio Reguilon and was unable to recover, being replaced by Nicolas Pepe at half-time.

And Arteta has confirmed the nature of the injury when he was asked about the severity of the problem. 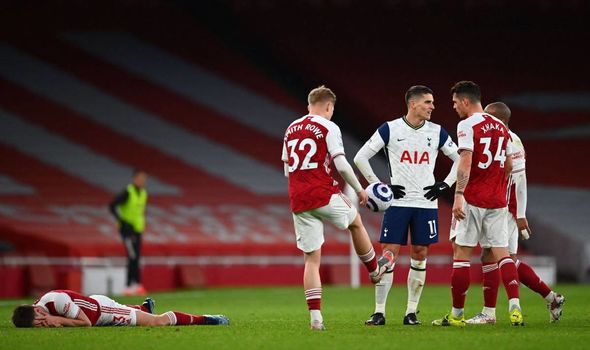 “We don’t know,” the Spaniard told reporters after the match. “He was feeling his hamstring, so we will monitor that.”

Arteta was not fully convinced by his side’s win over their London rivals, though, admitting there are still lessons to be learnt.

“We had a really strong performance right from the beginning, we created many chances and went a goal down with their first shot,” he said.

“But I love the reaction of the team, we stayed composed and in the end we won the game. Scoring before half-time was really important as it put us in a good position for the second half.

“We scored the second goal, we got a bit nervy in the final 10 minutes and that is one of the things we need to improve as a team.”