Barcelona will offload Rafinha this summer and the Premier League looks his most likely destination, reports claim. Rafinha joined the illustrious La Masia academy in 2006 but his 14-year relationship with the club is coming to a close.

The twice-capped Brazil international has entered the final 12 months of his contract, which expires in June 2021.

And, according to Spanish publication Sport, Barcelona want him off their books to generate funds for other key signings. 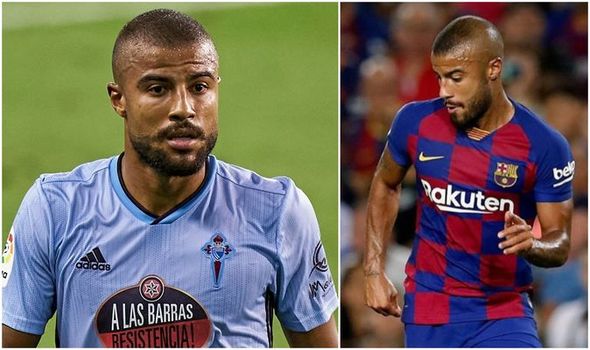 And the Dutch tactician clearly has no plans for Rafinha, who spent the 2019-20 campaign on loan with Celta Vigo.

Sport claim that the 27-year-old is on the market for just £14.4million and his availability has already attracted interest from England.

Sport suggest that Carlo Ancelotti’s Everton are ‘keeping an eye’ on Rafinha as the Toffees look to bolster their attacking options.

Rafinha reportedly has a firm offer on the table from Lazio but he’s expected to snub that proposal.

Sport claim nobody in La Liga could afford a move and would also be put off by the player’s previous injury troubles, which include a Cruciate Ligament Rupture.

Former Everton boss Koeman is expected to sit down with Rafinha but a ‘decision has already been made’ at board level.

Heads Up: Liverpool’s Andrew Robertson and Jurgen Klopp talk about losing loved ones