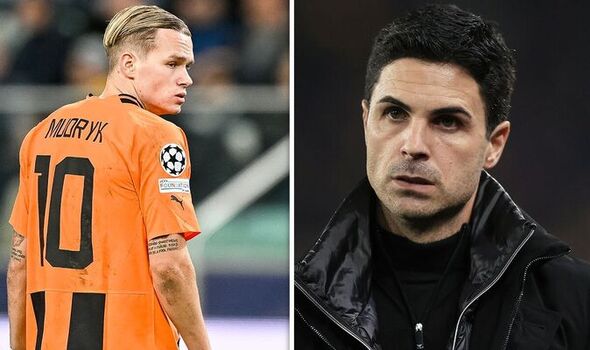 Mykhaylo Mudryk has spoken of his desire to join Arsenal on several occasions in recent months. But Gunners chiefs must not be tempted to splash out huge cash on a player who would not even be a starter for Mikel Arteta.

Arsenal are in the market for a winger in the January transfer window. Mudryk has been linked with a move to the Emirates since the summer.

However, his price tag has rocketed following his performances for Shakhtar Donetsk in the Champions League this season. Shakhtar chiefs have previously stated they value the player higher than Manchester United star Antony, who cost the Red Devils £86million in September, and that has been reiterated to The Athletic by director of football Darijo Srna.

Arsenal simply cannot afford to pay that much for a player who is not a guaranteed starter. Mudryk is a winger and plays the vast majority of his football on the left-hand side.

The Gunners already have one of Brazil’s brightest young talents in Gabriel Martinelli flourishing in that position. Emile Smith Rowe is set to be fit at the start of 2023 and provides another strong option.

Bukayo Saka has the right-winger spot nailed down. Arsenal do need to add another option in order to give the likes of Saka and Martinelli a breather when needed.

But splashing out as much as Shakhtar want for Mudryk would be the wrong move. Orlando City star Facundo Torres has also been linked with Arsenal.

Torres can play on both wings and, being left-footed, provides more of a like-for-like alternative to Saka when needed. The 22-year-old would likely cost far less than Mudryk and not demand as much of a regular starting spot.

Mudryk said this week he would prefer to join Arsenal over Real Madrid because he would be more guaranteed to be a starter. He said: “From a purely theoretical-fantasy perspective, if there was the option of being a bench player for Real Madrid or a starter for Arsenal, I’d probably choose Arsenal.”

However, breaking into a team flying high at the top of the Premier League table midway through a season is not easy for any player. Arsenal have a very strong starting XI, that cannot be disputed.

It is their squad depth that many have questioned when discussing their title credentials. Mudryk would undoubtedly strengthen the squad and perhaps is ahead of Torres in his development at the moment.

But spending £87million on a back-up makes little sense, especially when there are other areas of Arteta’s squad that also need adding to.

Scholes: Lingard told me that Man United dressing room is a 'DISASTER'