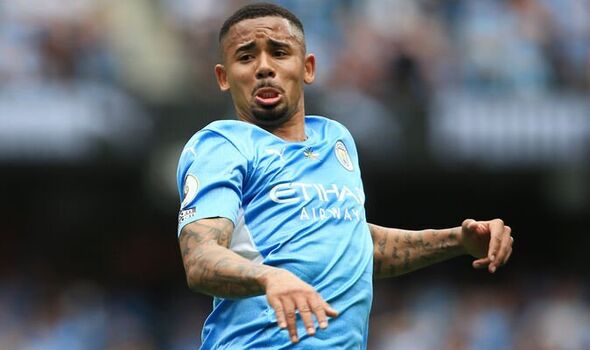 Arsenal have received a major boost after it emerged that it might not be possible for Real Madrid to sign Manchester City ace Gabriel Jesus, according to reports. The Gunners are desperate to sign a new forward this summer to help Mikel Arteta embark on a Champions League pursuit.

Mikel Arteta wants to sign a striker after the club saw their quest to finish in the Premier League’s top four partially derailed due to a lack of goals. Main forward Alexandre Lacazette only managed four top-flight strikes last term.

The Spaniard has earmarked Man City star Jesus as a potential arrival. The Brazilian has been made available after the Premier League champions confirmed the signing of Erling Haaland from Borussia Dortmund.

The Gunners face plenty of competition for the Brazilian, though, including from Real Madrid. However, Los Blancos could be forced to pull out of the race as they already have four non-EU players in their squad, according to transfer guru Andre Hernan.

La Liga clubs can only have three players who hail from outside the European Union on the pitch at the same time. They already have Eder Militao, Rodrygo and Vinicius Jnr.

Jesus has become available after City confirmed the arrival of Haaland. Pep Guardiola fended off plenty of competition to secure the Norwegian for his £51million release clause.

The 25-year-old Jesus endured a difficult campaign, scoring eight goals in 28 Premier League appearances. Four of those goals came in a stunning individual performance in a big 5-1 victory over Watford at the Etihad Stadium.

Guardiola has generally used the former Palmeiras man as a right winger in the last 12 months, despite the player spending much of his career as a central striker. Jesus would likely play through the middle at Arsenal given the North Londoners’ intensifying need for a player in that role.

Arteta lost Lacazette after the Frenchman ran down his contract and joined former club Lyon. Arsenal needed a new striker despite Lacazette’s situation and now face needing to replace the 31-year-old.

They were boosted by Eddie Nketiah reneging on his desire to leave in search of more game time, with the former England U21 captain set to sign a new contract. The 23-year-old scored 10 goals after being given the starting No.9 role after it became clear that Lacazette would move on.

Despite Nketiah committing his future to the Emirates Stadium, Arsenal are still being linked with an elite forward. Everton’s Dominic Calvert-Lewin and Napoli’s Victor Osimhen have both been widely reported as possible targets.