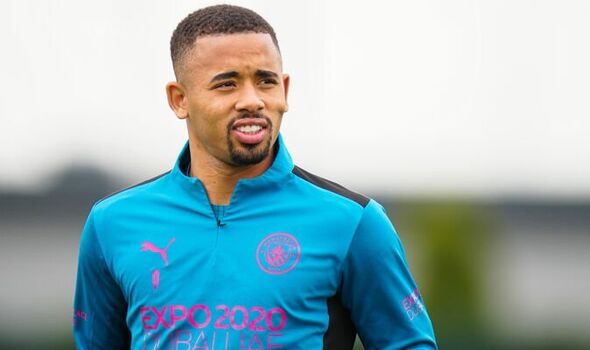 Arsenal icon Thierry Henry has given Gabriel Jesus a glowing reference amid rumours of a transfer from Manchester City to the Gunners. Reports have suggested that Mikel Arteta and recruitment chief Edu are planning to replenish the North Londoners’ forward line with the addition of the Brazilian.

Jesus has found game time hard to come by for most of the season, with Pep Guardiola boasting a stacked attacking armoury. But a recent good run of form has seen the 25-year-old convince the Spaniard to use him more.

A quartet of strikes in last week’s 5-1 win over Watford followed a strike in the 2-2 draw with Liverpool earlier this month. Jesus had previously not scored a Premier League goal since September 25.

He then scored in this week’s thrilling 4-3 Champions League win over Real Madrid at the Etihad Stadium. Some fine form could encourage Jesus to demand a starting role in the second leg.

JUST IN: Arsenal and Tottenham face transfer issue as Ward-Prowse decision made

But his recent flurry of goals has not prevented speculation with a move away from City. According to several reports, Arsenal are said to have the former Palmeiras prodigy high on their wish list, with Arteta desperate to sign a new forward in the summer.

And the club’s record scorer Henry has given his backing to Jesus, insisting that the striker is versatile and has a natural ‘instinct’ in an around the penalty area.

The Frenchman told CBS Sport: “What he can give offensively to the team. We saw that he scored four goals at the weekend [against Watford]. When he is in the box, he’s one of the three that is playing, or since [Sergio] Aguero left, he has that nine instinct. He has what the number nine would smell.

“What I like with him is that when he puts pressure, whether it’s on the left, on the right or in the middle, he doesn’t have a problem defending in these situations by coming back and helping his team.”

But he could find his future in doubt of City successfully complete their pursuit of Borussia Dortmund forward Erling Haaland. The Premier League leaders are considered the favourites to sign the Norwegian, who has a staggering record of 82 goals in 86 games for the Bundesliga club.

Arsenal could be the perfect destination for Jesus, with plenty of game time up for grabs. Arteta faces the prospect of losing both of his first team strikers at the end of June as the contracts of Alexandre Lacazette and Eddie Nketiah expire.