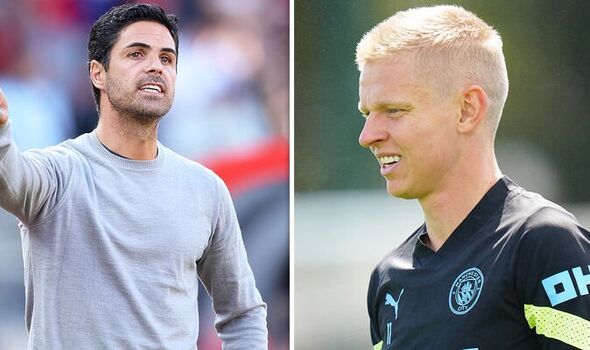 Arsenal boss Mikel Arteta has made signing Oleksandr Zinchenko his priority after missing out on Lisandro Martinez, according to reports. Martinez is set to join Manchester United instead so Manchester City star Zinchenko is back on the agenda for the Gunners.

Arsenal were linked with the 25-year-old earlier in the window. Interest had gone quiet though as Arteta pursued Martinez.

Arteta was attracted by the versatility of Martinez, who can play at left-back, centre-back and in central midfield. Arsenal made a couple of offers for Martinez but it is United who have finally struck an agreement.

Zinchenko is a similar player to Martinez in some regard and has played the majority of his football at City as a left-back. And The Athletic claims Arsenal are in contact with the Premier League champions regarding a move for the Ukraine star.

Arsenal have already signed one player from City in Gabriel Jesus. And now they want to bring his former team-mate Zinchenko to the Emirates.

Arteta knows Zinchenko well following his three-and-a-half-year spell at Pep Guardiola’s assistant. And now he is keen for a reunion with the versatile star.

The report says City are willing to sell Zinchenko at the right price. Arsenal are yet to meet their valuation for the player, who can also play in midfield.

Zinchenko has made 128 appearances for City in all competitions since joining from Russian side FC UFA in 2016. He would immediately see two familiar faces if he were to join Arsenal in the form of Arteta and Jesus.

Jesus revealed the impact Arteta has had on his career and his excitement of working with him again. Jesus said upon signing: “We spoke a couple of times about the club, the players, the project and the future.

“He helped me a lot [at Manchester City]. We would always stick together after the training sessions and do some finishing or something. He’s a very intelligent guy and was an amazing player, so if he knows something he can teach me or the young players.”

For the latest news and breaking news visit: express.co.uk/sport