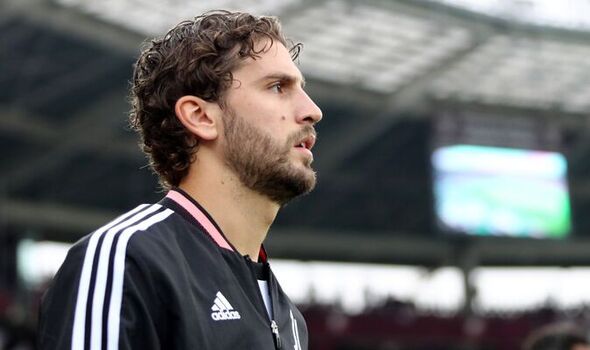 Arsenal should consider swallowing their pride and launching a January swoop for Juventus midfielder Manuel Locatelli, who could prove to be the perfect fit for the Gunners. The box-to-box menace, who was one of the shining lights at Euro 2020 with Italy on their way to glory at Wembley Stadium, was courted by Arsenal after the tournament before the Sassuolo star eventually sealed a £32.6million switch to Turin.

Yet things haven’t gone entirely to plan for Locatelli, who has struggled to perform at his maximum under Massimiliano Allegri.

With the team struggling to thrive under the Italian tactician, Locatelli has really had difficulty fulfilling his potential with the Bianconeri.

He has remained a regular starter but his impact on the side has been restricted due to the limitations of this underwhelming Juventus side, which has seemingly failed to get out of first gear this season.

Allegri’s men are currently eight in the Serie A table, some 10 points adrift of leaders Napoli after only 10 matches.

Locatelli has started every league match that he has been available for (eight) – playing as a defensive lynchpin at the base of Juventus’ midfield.

But in truth, it feels like his career is going nowhere all the while he remains at Juventus. The Old Lady are a club facing a troublesome journey to return to the summit of Italian football.

Juventus know they need to sack Allegri but the board are remaining firm and continuing to show faith in their head coach due to the hefty pay-off it would require to relieve him from his duties.

Arsenal should look to pounce on the situation of Locatelli as he is a player that would still seemingly fit into their set-up like a glove.

Although it must be noted that Granit Xhaka and Thomas Partey would remain first-choice at the base of Arteta’s midfield, Locatelli would bring bags of quality to the table.

He has the ability to glide with the ball while he can also impact the game at both ends of the field, something Arsenal are sometimes lacking in the middle of the park despite respectable contributions from Xhaka and Partey this term.

Transfermarkt currently value Locatelli at £31.5m and with Juventus struggling, there is a sense that every player has a price as they look to free up some funds to improve their squad.

Allegri will not want to lose Locatelli but given Arsenal’s previous interest and current status, there is a chance the player would be open to becoming part of the project.

Arteta’s depth in central midfield is currently weak with Albert Sambi Lokonga still yet to hit the heights that were expected of him in north London.

The Belgian has now lost his place in the national team squad and has since raised frustrations over his lack of game time at Arsenal this season.

Locatelli would provide stronger competition and he could really help increase the levels of intensity, desire and tenacity within Arsenal’s squad.

If the Gunners really are to last the distance in the Premier League this season, they need real hunger and quality in reserve.

Arsenal are yet to face any serious injuries this season and have largely been able to field the same team.

That could all change after the World Cup and beyond, meaning the Gunners need to keep their fingers on the pulse if they have aspirations of delivering trophies come the end of the campaign.