Arsenal star Mesut Ozil has offered to pay the wages of the club’s mascot Gunnersaurus. News emerged on Monday that Arsenal had made Jerry Quy – the man inside the mascot costume – redundant after 27 years of service to the club. The decision was criticised by Gunners legends on social media and fans even set up fundraising pages to get Quy his job back.

But now Ozil has decided to intervene with an incredible gesture.

Ozil has not played for Arsenal since March after falling out of favour under manager Mikel Arteta.

The former Germany international is Arsenal’s highest-paid player on £350,000 a week.

And now he has tweeted that he is willing to pay Quy’s wages for as long as he is an Arsenal player. 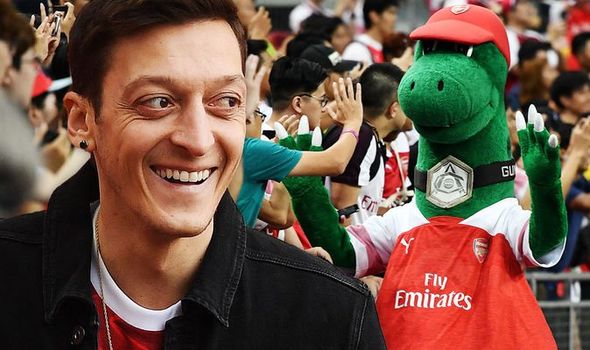 The 31-year-old wrote on Tuesday afternoon: “I was so sad that Jerry Quy aka our famous & loyal mascot @Gunnersaurus and integral part of our club was being made redundant after 27 years.

“As such, I’m offering to reimburse @Arsenal with the full salary of our big green guy as long as I will be an Arsenal player… so Jerry can continue his job that he loves so much.#JusticeForGunnersaurus #M10 #YaGunnersYa.”

Ozil may have played his way back into the good books of Arsenal fans.

His contract at Arsenal runs out at the end of this season and the club were keen to shift him in the summer window.

But the attacking midfielder has stayed put to fight for a place under Arteta.

Meanwhile, former Arsenal forward Paul Merson was shocked at the news that Quy had lost his job.

“All those kids, all those Junior Gunners and everything like that. He’s part of it now. 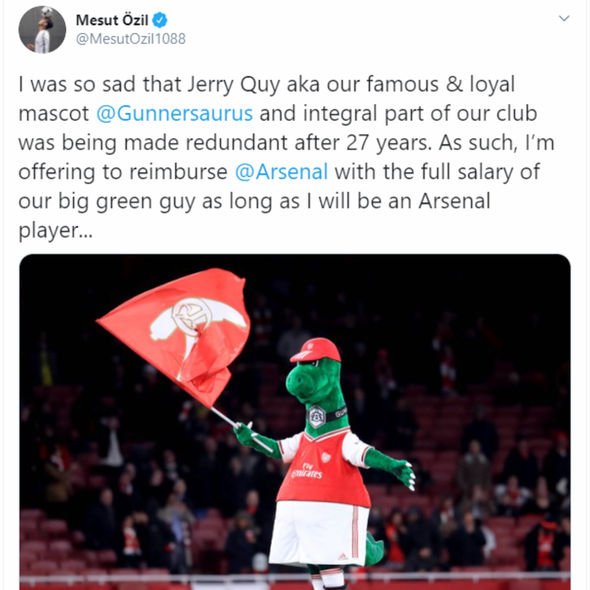 “It’s disappointing. I think it’s poor by Arsenal. I really do.

“I think it’s terrible by Arsenal. I remember him when I was there or just when I’d left but my kids were junior Gunners and they used to get the stuff from him. I just find it… it’s not classy!”

But thanks to Ozil, Merson, Dixon and many others will be happy that the club’s long-serving mascot will remain.

Man Utd boss Ole Gunnar Solskjaer sent Chelsea warning over sack pressure despite PSG win
Recent Posts
This website uses cookies to improve your user experience and to provide you with advertisements that are relevant to your interests. By continuing to browse the site you are agreeing to our use of cookies.Ok