Arsenal’s recent struggles continued with a 2-1 loss to Wolves which leaves them 14th in the Premier League table. A lack of creativity continues to hinder Mikel Arteta’s side and Pierre-Emerick Aubameyang is suffering as a result…

Their best performances under Mikel Arteta have come in games against big-six rivals, games in which they have been able to sit back and play on the counter-attack, but when it comes to breaking down deep-lying opponents, the lack of imagination is alarming and so are the numbers.

In the Premier League this season, only Fulham, West Brom, Burnley and Sheffield United – the bottom four sides in the table – have scored fewer goals than Arsenal (10). The Gunners rank 16th for shots too (95), and only two places higher for expected goals (11.1).

It is striking how rarely they progress the ball through the centre of the pitch and the issue was plain to see against Wolves. Unable to find a way through the middle, Arsenal were left repeatedly funnelling the ball out to the flanks instead. From there, they attempted a remarkable total of 31 open-play crosses – the third-most by any Premier League side in any game this season.

Damningly, only three of them even reached an Arsenal player.

Those speculative deliveries had an air of hit-and-hope about them and the question for Arteta is where exactly in his squad he is going to find the creativity his side so sorely lacks. Thomas Partey has been brought in at great expense, but he is no playmaker. Mesut Ozil, meanwhile, is not even an option having been excluded from their Premier League squad.

The result is that Arsenal have only mustered eight shots on target across their last four Premier League games at an average of one every 45 minutes.

It is not just the ability to pick killer passes that Arsenal seem to lack. In fact, there is an absence of spontaneity in general. Arteta is a hands-on coach known for the incessant instructions he barks at his players from the touchline, but might his side benefit from a little more freedom in the final third?

Against Wolves, Arsenal only completed two dribbles over the course of the entire game. In total this season, only five Premier League sides have completed fewer. Dribbles are high-risk, of course, often a means of surrendering possession rather than creating danger, but playing it safe is getting Arsenal nowhere. They are in dire need of a spark.

Aubameyang isolated and out of sorts

A lack of creativity is not such a problem when you have a striker who only needs one chance to score, but Pierre-Emerick Aubameyang looks a long way short of the ruthless form that propelled Arsenal to FA Cup glory in August.

The 31-year-old, scorer of 22 Premier League goals last season, has only netted once from open play in 10 appearances this time around, with that goal coming against Fulham way back in September on the opening day of the campaign. Since then, his only Premier League goal has come from the penalty spot against Manchester United.

Arteta has attempted to remedy the problem by moving Aubameyang from his previous position on the left flank to the central striking role, demoting Alexandre Lacazette to the bench in the process, but his struggles continued against Leeds last weekend and it was a similar story against Wolves. 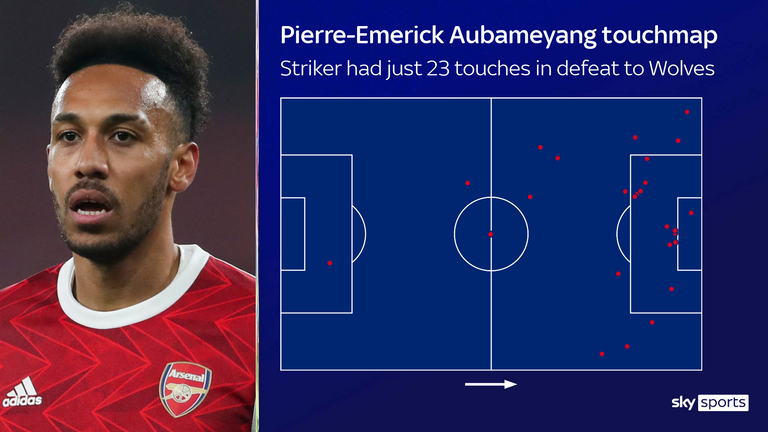 In total at the Emirates Stadium on Sunday, and despite Arsenal having almost 70 per cent of the possession in the second half, Aubameyang only touched the ball 23 times. It was his fewest in any game all season and fewer, too, than any other player on the night.

Aubameyang did not exactly receive an abundance of service last season, but the situation has worsened recently and the Wolves game showed his confidence has suffered.

Twice in the second half, he spurned opportunities you would expect him to take, first when his uncharacteristically tame effort was cleared off the line, then when he sent a close-range header over from a rare accurate cross.

A lack of service and a crisis of confidence. It’s a miserable combination. 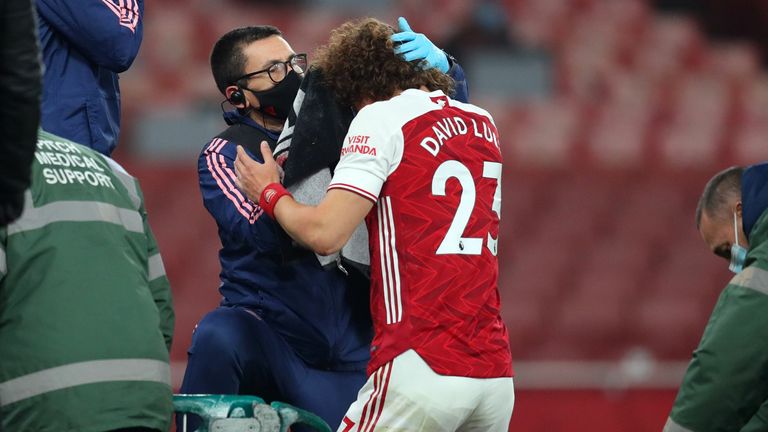 The Wolves game was a reminder that Arsenal’s issues are not limited to one end of the pitch.

There was evidence of defensive improvement earlier this season – in fact they boasted the best defensive record in the Premier League after seven games – but standards have slipped rapidly in recent weeks and the shambolic defending for both Wolves goals underlined the problems.

The defeat to Nuno Espirito Santo’s side comes just three weeks after they were torn apart by Aston Villa in their previous home game, and sandwiched between those two fixtures was the fortuitous goalless draw with Leeds in which Arteta’s men gave up 25 shots on their goal.

Arsenal have not been helped by issues at centre-back, with David Luiz often unavailable, Calum Chambers and Pablo Mari also sidelined and William Saliba deemed unready for Premier League football, but it is a question of structure as well as personnel. Arsenal are simply too open, their defence exposed by gaps elsewhere in the side.

It is down to Arteta to plug those gaps while simultaneously finding a way to make his side more potent in attack. It is a tall order, not least for a young coach still only at the start of his managerial career, but with a trip to north London rivals Tottenham, live on Sky Sports, next on the agenda, he has little time to waste.