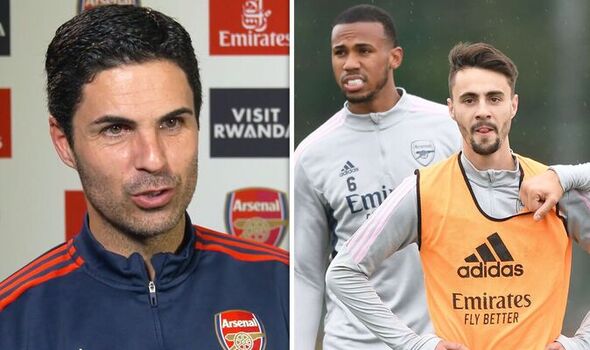 Arsenal boss Mikel Arteta has revealed he will select a “very competitive” team to play Brighton in the Carabao Cup on Wednesday. The Gunners face two matches before the break for the World Cup, starting with the visit of the Seagulls.

Arsenal are top of the Premier League table, two points clear of Manchester City in second. The Gunners have also had a busy schedule in the Europa League, with the group campaign squeezed into a tighter period before the upcoming hiatus.

Those are both reasons Arteta may be excused for fielding a much-changed team in the third round of the Carabao Cup. However, Arteta has hinted he will pick a strong side and will be taking the game seriously.

He told Arsenal media: “It is a different competition but the purpose is the same, to play as good as we can, win the game and go into the next round. You know there are no second chances and we’ll take it very seriously.

“We’re going to pick a very competitive team. I think everyone deserves chances, and we’ll make some changes with judgement in relation to the load of the players, but we’ll play to win.”

Cedric Soares could earn his first start of the season. Europa League regulars such as Rob Holding, Albert Sambi Lokonga and Eddie Nketiah are also likely to play.

Arteta has been full of praise for the back-up brigade who have had to settle mostly for cup football so far this term. He added: “The ones that haven’t played want to have their chance, and feel that they are contributing to the team.

“The positive thing is that everybody has played games and everyone has been important. We have two games to go, and the focus has to be there because we know that afterwards we have a big break.

It has been an extremely busy period for most teams but Arteta says his first-team stars have coped with it well. He continued: “They’ve dealt with [the fixture list] really well,”

“I think we had a really good pre-season and we put the boys in a really good condition to face this fixture congestion, and they have responded extremely well, especially the way we play which is really intense.”

Neil Warnock reveals he nearly appeared in 'I'm a Celebrity…'