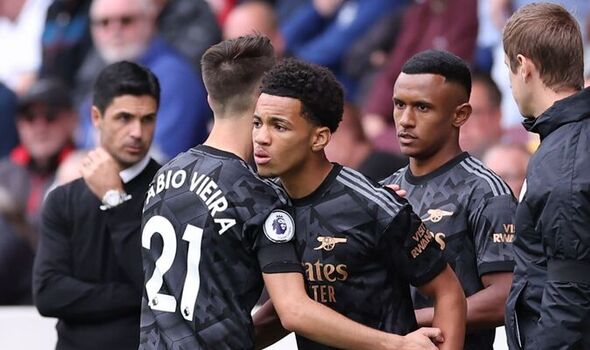 Mikel Arteta had a very simple message for Arsenal’s 15-year-old sensation Ethan Nwaneri before he entered the fray in the 3-0 win at Brentford to become the youngest player ever to feature in the Premier League. The highly-rated teenager, who was born in March 2007, came off the bench for the final few minutes of the Gunners’ convincing triumph in west London that saw them reclaim their place at the summit with six wins from their opening seven matches.

Goals from William Saliba, Gabriel Jesus and Fabio Vieira were enough to seal all three points but despite another impressive team showing, there was one individual who stole all the headlines when Nwaneri wrote his name into the history books.

When asked how he helped the youngster settle his nerves, Arteta made it clear that he did not need to say much to the attacker before making the historic substitution.

The Spaniard, speaking in his post-match press conference, said he told Nwaneri: “Congratulations and to enjoy it…”

Nwaneri was not on the field long enough to make much of an impact but considering he had only just turned 13 when lockdown began back in 2020 – this was a moment to savour both the club and player. 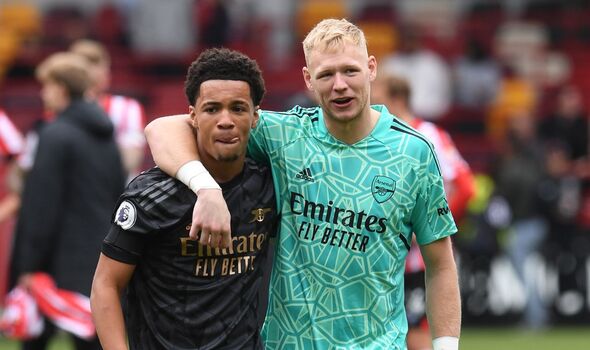 Arteta, having showed total confidence in Nwaneri, claims he knew he could trust the youngster following his first interaction with the prospect.

“It was a pure gut feeling. I met the boy. I really liked what I saw,” he added.

“Per [Mertesacker] in the academy was giving me good feelings. He’s trained with us a couple of times and then I had the feeling from yesterday that if the opportunity could come I was going to do it.”

Captain Martin Odegaard’s absence meant Arsenal were a little light in attacking midfield – an opportunity that was made for Nwaneri.

Arteta has warned that his development must be managed though, stating: “All the steps are not going to be forward. Maybe he’ll need to go three steps back to go forward.

“It’s great. He deserves it. He has been doing great. He is such a big talent we want to keep with us.”

Incredibly, Nwaneri was forced to change away from the main Arsenal dressing room due to his age because he is not yet 16.

Arsenal are making huge strides under their head coach despite missing out on the top-four on the final day of last season following two successive costly defeats to Tottenham and Newcastle.

Overall, Arteta was delighted with the way his side performed as they made another statement at the top of the Premier League.

He told MOTD2: “I’m really pleased. It’s never easy to come here and win but we dominated the game.

“I said before the game that the game we had here last season was a bad day. it was a building character day. A team has to evolve and take the lesson and move forward.

“In different moments we always stick together. We had 12 first team players in training yesterday but I don’t want to use excuses. But you saw today we had some kids.”