Aston Villa vs Manchester United LIVE: Ole Gunnar Solskjaer’s side face a quick turnaround after defeat on Thursday against Roma as they look to consolidate second place with three points at Villa Park

Second-placed Manchester United can stretch their lead from Chelsea in third to six points with a victory at Aston Villa on Sunday afternoon.

Ole Gunnar Solskjaer’s side haven’t played domestically since a goalless draw at Leeds two weeks ago, following their postponed clash against Liverpool, though they have progressed to the Europa League final in the meantime.

Villa however are coming off the back of an impressive 2-1 win at Everton last week and can leapfrog Arsenal and Leeds with a win.

Sportsmail’s KIERAN LYNCH will provide live coverage of Aston Villa vs Manchester United, including all the build-up, team news and in-game updates.

Harry Maguire has labelled his side’s schedule this week as ‘ridiculous’ as he goes for a Premier League record.

If Maguire lasts the full duration this afternoon he will break Gary Pallister’s record for consecutive matches without missing a single minute.

It would be an incredible record for the England international who has not missed a minute since joining United in the summer of 2019.

With three games in five days though, it looks like unfortunately that run could come to an end this week.

The hosts have a pretty poor record when it comes to games against their opponents today.

The last time they beat the Red Devils was a 1-0 victory at Old Trafford in December 2009, when Gabby Agbonlahor netted the winner.

You have to look back a further 14 years since Villa beat Manchester United at home in the league, when goals by Ian Taylor, Mark Draper and future United striker Dwight Yorke sealed a 3-1 victory in August 1995 with David Beckham scoring for the visitors.

It’s the longest unbeaten away run one side has had against another in English league history and Villa will be keen to put a stop to United’s dominance against them.

Manchester United’s postponed game with Liverpool has created what looks to be a very tricky week for the Red Devils.

Ole Gunnar Solskjaer’s side face three games in five days, starting with their trip to Villa Park this afternoon.

They then face Leicester on Tuesday evening before their rearranged fixture with Liverpool takes place on Thursday night.

Solskjaer has made four changes to his starting line-up today and expect plenty more in their next two games.

These sides last faced off on New Year’s Day when Manchester United claimed a 2-1 victory to go joint top of the table.

They took the lead when Tyrone Mings’ headed clearance rebounded off the head of Anthony Martial and found the back of the net.

Manchester United though got the winner when Bruno Fernandes scored from the spot after Douglas Luiz was judged to have fouled Paul Pogba. 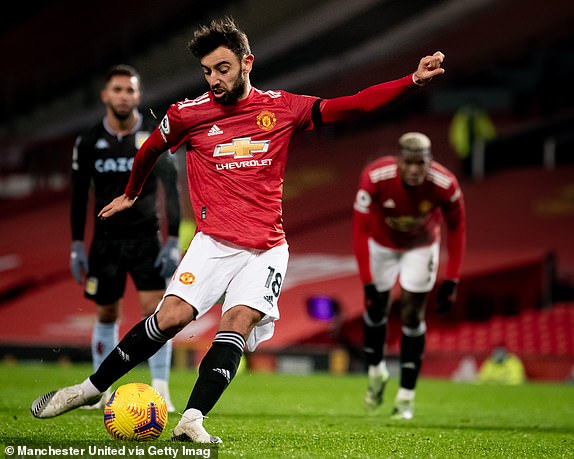 Manchester United make four changes from the side that faced Roma in the second-leg of their Europa League semi-final.

Aston Villa are unchanged from the team that beat Everton 2-1 last week.

Ollie Watkins continues as the lone man in attack with Jack Grealish still out of action through injury.

Hello everyone and welcome to Sportsmail’s live coverage of the Premier League clash between Aston Villa and Manchester United.

This could potentially be a decisive afternoon as Manchester City will be crowned Premier League champions should Aston Villa claim victory.

It is a big task for Dean Smith’s side though, as their opponents have not been beaten away from home in the league since a 2-0 loss to Liverpool on January 19 last year.

The game marks the start of a difficult week for Ole Gunnar Solskjaer’s side who face three games in five days.

Villa could provide stern opposition and they are coming off an impressive 2-1 win away at Everton last week.

Team news with you shortly.