Home » Soccer » Ballon d’Or 2022 live stream, how to watch as Ronaldo to miss out 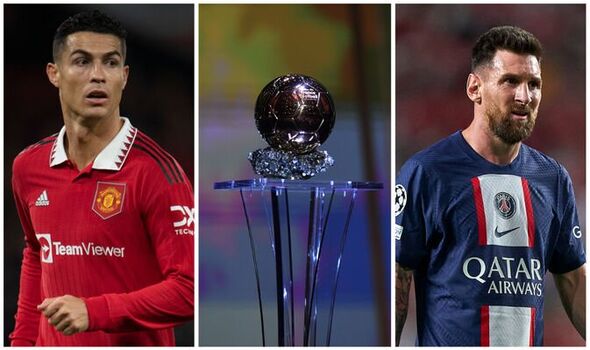 The Ballon d’Or ceremony will take place on Monday in what promises to be another glamorous ceremony with stars from football, other sports and celebrities all heading to Paris to discover who will be crowned winner for 2022. And for the first time since 2007, neither of Cristiano Ronaldo nor Lionel Messi are expected to collect the award having shared 12 of the past 14 individual prizes between them.

It has been a difficult period for two of football’s greatest players. Manchester United star Ronaldo scored 24 goals in all competitions last season for the Red Devils after his £12million transfer from Juventus, but the team’s underachievement on the pitch may have cost him a chance of competing for the gong.

Similarly, Messi also moved clubs for the first time in his career after leaving Barcelona to join Paris Saint-Germain in August 2021. However, the Argentinian’s first season in France did not go to plan as the 35-year-old managed just 11 goals in all competitions for the Parisian giants and he failed to make the list entirely.

Messi leads the way for most awards won after collecting last year’s award, giving him seven in total. Ronaldo has five, but the Portuguese has not won since 2017 and at 37, it appears his best years are now behind him. Instead, it seems his former Real Madrid team-mate Karim Benzema is the heavy favourite to land the prize for the first time in his career.

Benzema enjoyed his finest goalscoring season to date in 2021-22, bagging 44 goals in all competitions and 27 in La Liga alone. Benzema’s performances were key to Madrid winning the domestic title ahead of Barcelona and Champions League, with the forward producing stunning displays against PSG, Chelsea and Manchester City before Los Blancos beat Liverpool 1-0 in the final back in May.

His closest competitors could be Robert Lewandowski, who scored 50 goals in all competitions for Bayern Munich before signing for Barcelona, and Kylian Mbappe, with the French star performing at a high level all season. Erling Haaland may make a late claim for the prize after his stunning goal record with Borussia Dortmund and Manchester City in 2022.

Live stream, TV channel and how to watch

The Ballon d’Or, the Ballon d’Or Féminin, the Kopa Trophy and the Yashin Trophy will be awarded on October 17 in Paris in a lavish ceremony at Theatre du Chatelet.

However, the Ballon d’Or ceremony is not currently broadcast live on TV in the UK.

Those wanting to watch the full ceremony can head over to L’Equipe’s YouTube channel, where a dedicated live stream will be available to view for free.

Prices provided by Betfair and are correct at the time of writing.