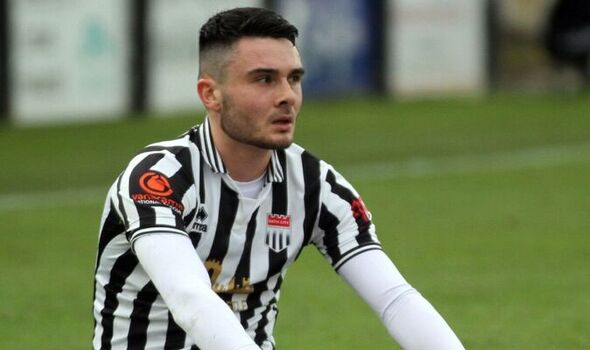 Non-league side Bath City have published a statement providing an update on Alex Fletcher’s condition. The striker’s collision with an advertising board saw Tuesday night’s match with Dulwich Hamlet abandoned as he was taken to hospital for emergency neurosurgery.

The incident occurred in the fifth minute of Tuesday’s National League South fixture. Fletcher, 23, collided head-first with an advertising board which, at Bath City’s Twerton Park, are reinforced with concrete blocks.

The match was initially halted for 30 minutes and an ambulance was called. The tie with Dulwich Hamlet was eventually abandoned following serious concern for Fletcher’s wellbeing.

On Wednesday morning, Bath City published a statement from Fletcher’s parents on their official Twitter account. “Unfortunately Alex has sustained a severe head injury as a result of last night’s events,” it read. “He required emergency neurosurgery to stabilise his condition and was then admitted to intensive care where he remains in a stable but critical condition.

“Alex’s family would like to thank everyone for their best wishes that have been sent.” The club themselves added: “No further comments will be made at this stage and we ask you all to respect the family’s privacy. Everyone at Bath City is sending their unconditional love, strength and support to Alex and his loved ones.”

Fletcher previously spent time at Plymouth Argyle with loan spells at Torquay, Aldershot and Tiverton Town. He eventually left Plymouth permanently in 2020 before signing for Bath City in 2021 and winning their Player of the Year award last campaign thanks to a 19-goal haul.

With the match abandoned at 0-0, Dulwich Hamlet released the following statement on Tuesday evening: “Due to the serious injury sustained by Alex Fletcher, both teams have agreed to abandon the game. For now the most important thing is the safety and recovery of Alex, and from everyone connected with Dulwich, we wish him a speedy and full recovery.”

The Vanarama National League added: “Everyone at The National League sends their best wishes to Bath City’s Alex Fletcher. We, like everyone, hope to hear positive news very soon and wish Alex a speedy recovery.”