Ben Chilwell on his desire to emulate Chelsea’s 2012 Champions League heroes, his ‘rollercoaster ride’ through the ranks… and what it’s like working with ‘passionate’ boss Thomas Tuchel

Images of an iconic night in Moscow stick in the mind of Ben Chilwell. It was Chelsea against Manchester – United not City – and the first Champions League final contested by two English teams.

It was a symbolic moment for Roman Abramovich at the Luzhniki Stadium on the most prestigious stage in European club football. Perhaps the very moment his club arrived where he demanded it be.

In Milton Keynes, Chilwell was 11 years old and glued to the TV. ‘That’s the one that stands out,’ recalls the England international. ‘United against Chelsea is probably the one I remember most. My dad made me aware of the fact it was an all-English final and I needed to watch it. 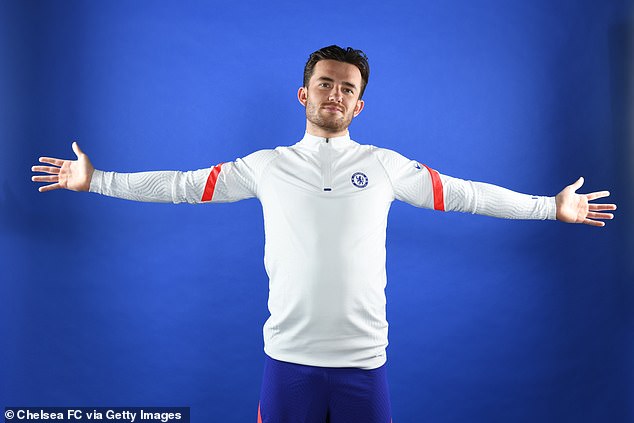 ‘In all honesty, my dad probably wanted United to win. I wasn’t too bothered. I just enjoyed watching the footie. Extra-time and penalties, and so many good players playing. It was a long night but it was a gripping game and penalties are always fun, aren’t they?’

Not that much fun, as it turned out, for John Terry or Nicolas Anelka. They both failed to score from the spot as Chelsea lost the shootout in torrential rain. Nor Didier Drogba, who was sent off in extra-time.

Four years on, and they finally won it against Bayern Munich in Munich. It was another night of high drama and an altogether happier memory for those at Stamford Bridge. 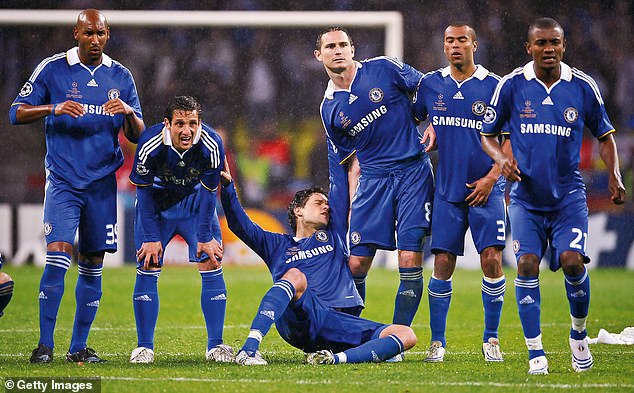 By the time they lured Chilwell from Leicester for £50million last summer, an entire generation had grown up viewing Chelsea among the elite of European football. On Saturday, in Porto, they compete in their third Champions League final, against Manchester City.

‘You come to Chelsea to win trophies,’ says Chilwell, ‘to fight for the title every season and get to cup finals. This season we’ve managed to secure top four, got into an FA Cup final and now the Champions League final.

‘I watched in 2012 too. It was a good game in Munich, seeing an English team win it and, again, my dad made sure I knew it was a great thing for English football. And you start to appreciate a club’s history.

‘People are talking about it around the training ground. It would be nice if we could replicate that, and go and get that Champions League trophy for the second time for the club.’ 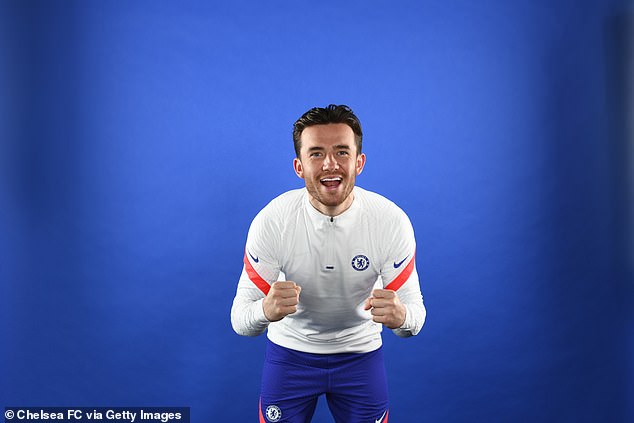 Since Chilwell joined Chelsea, they have reached the FA Cup final and secured a top-four spot

For Chilwell – who was overlooked by his local team Milton Keynes Dons, and joined Leicester via Rushden & Diamonds – there have been difficult times to endure in his young career.

At 16, he was about to be released until a reshuffle at the Leicester academy brought in new coaches Kevin Fogg and Mark Jackson.

Fogg, who also helped forge the careers of England defenders Kyle Walker and Harry Maguire at Sheffield United, recognised something in Chilwell to make him captain of the Under 16s and he has never looked back.

‘The highs, the lows, the season at Leicester that I found very difficult, but looking back now probably helped me the most in my career in terms of mentally and knowing what it actually does take to play football at this level.’

Twists in his personal journey were brought back to life, on Tuesday, in a phone conversation with a friend Matty Miles. 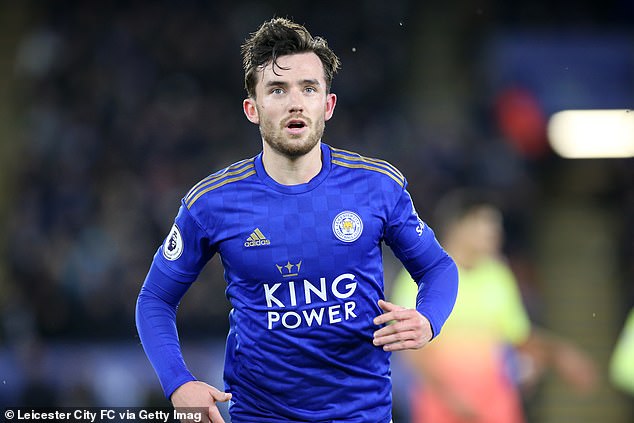 They were team-mates in the Leicester youth ranks, and Miles is now a PE teacher and a coach who was playing semi-pro for Peterborough Sports until the lockdown brought the Southern League to a halt.

‘He was 17 when he was released and we’ve stayed very close since,’ says Chilwell. ‘He said to me, “Could you imagine when we were playing at Belvoir Drive in the youth team that you’d be playing in a Champions League final in a few years’ time?”

‘We had a little laugh about that and we reminisced over memories together. He was the captain of our youth team. Just to see how happy he was for me, and to talk about the old times and the fact we’ve stayed close and he’s coming out to watch the game.’ 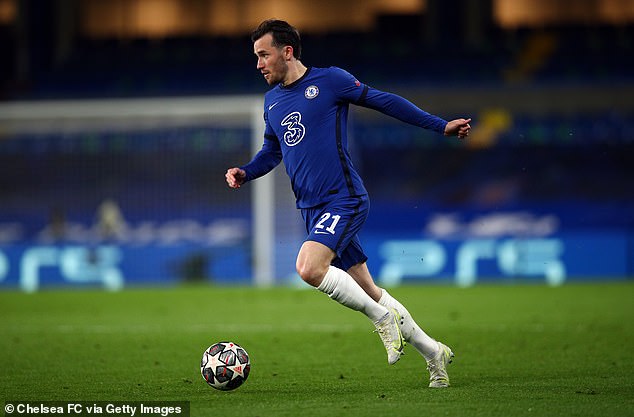 Frank Lampard – who scored for Chelsea in Moscow in 2008 and captained the team four years later with Terry suspended in Munich – was in charge when Chilwell signed.

But this formative team has really started to thrive under his successor Thomas Tuchel.

They recovered from ninth in January to finish in the top four and qualify for the Champions League next season, lost to Leicester in the FA Cup final, and the players are getting used to Tuchel’s relentless barrage of instructions.

‘He’s a very passionate manager, very demanding,’ says Chilwell. ‘When he’s animated, it’s his passion coming across and we completely respect it, if anything it helps us. 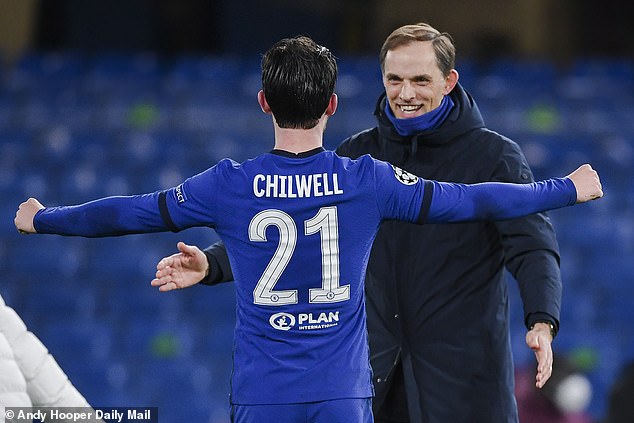 Chelsea are thriving under Thomas Tuchel, who Chilwell labels as ‘passionate’ and ‘demanding’

‘It’s a good thing. There’s so many young, talented players in this squad and he’s very excited and eager to help us all.’

Although he started in only one of Tuchel’s first six Premier League games, Chilwell has forced his way back into the side ahead of Marcos Alonso and Emerson.

‘He pushes me every day, he’s hard on me but that’s what I want. It’s music to my ears hearing the things every day he thinks I can work on. The fact he’s taken a lot of time to help gives me confidence he wants me to improve. 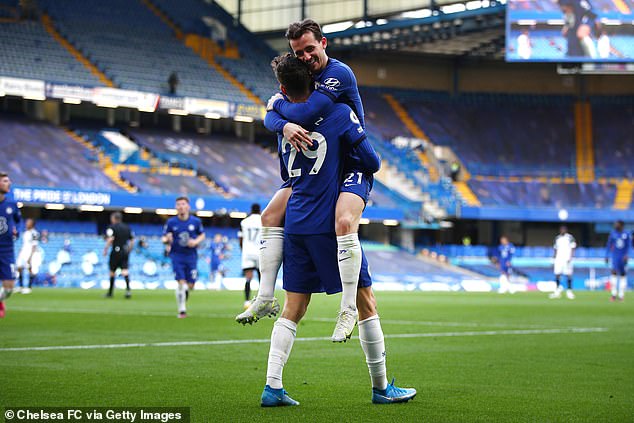 Chilwell insists that Chelsea’s target is to win trophies ‘year in, year out’, including the league

‘He sees the potential in us as a team and individuals. He sees a vision and an end goal of where he thinks we can be over the next two-to-three, three-to-four years: winning the Premier League, the Champions League and FA Cups. He wants us to be winning stuff every season and he genuinely believes he can.

At Chelsea, that is always the aim.