Two games played, two wins achieved. A dominant performance over rivals Schalke last Saturday and a professional display here against Wolfsburg. Six points picked up to maintain the chase on Bayern Munich ahead of their midweek showdown that will be a title sorter if not a decider.

It seems the absence of fans, even those as vociferous as Borussia Dortmund’s, is no hindrance to performance for those in yellow. And you could argue the moral reinforcement of knowing they can get things done without leaning on the Yellow Wall will have been most pronounced here at the Volskwagen Arena. This was a far from typical performance yet they dug deep to finish it 0-2: both goals arriving at similar periods in the first and second-half to dissipate Wolfsburg-induced pressure.

But the game began with the spectre of another absence with confirmation that Mario Gotze will leave Dortmund this summer once his contract expires. The 27-year old has had a mixed time of it this season, so much so that this stodgy performance and Gotze’s role as an unused substitute were merely a coincidence.

Nevertheless, this is a club who replace established quality with younger prodigious quality as casually as a mechanic changing a tyre. Gio Reyna is the latest, and the 17-year-old was able to take to the field on 79 minutes after missing what would have been a first league start last week through injury.

Even on the field, inspiration comes from all corners, and it was the wing-backs this time that underlined superiority. Few sides boast a better pair than Raphael Guerreiro and Achraf Hakimi.

It might be a tad unfair to refer to Guerreiro as an unlikely goal source, but you’d have been some chancer to predict he would be one of the leading scorers of this post-coronavirus break programme. It’s three goals for him, behind the four for new gem on the block Kai Havertz – a full-back and a creative forward, respectively.

Then again, scoring is very much in his remit. And when set against his fellow countrymen, the Portuguese is second only to a certain Cristiano Ronaldo with his eight league goals in Europe’s top five leagues. That eighth arrived just in the nick of time in the first half.

The back-and-forth for the opening half an hour was more reflective of the relative positions rather than points. The table spoke of sixth versus second, and for Dortmund’s superior quality across the XI, Wolfsburg’s bustle on the deck and shoulder-to-shoulder.

But the 15 point difference came front and centre with 32 minutes on the clock. While the host’s work with the ball was consistent yet benign, here was pass-and-move manifest.

Julian Brandt checked run on the wing, beyond his right wing-back, took out two in green, before laying off to that man – Hakimi – who in turn sets Thorgan Hazard free into the box. Hazard’s run began after making the pass to Brandt, skipping over the ball as it made its way to Hakimi in the process.

Style points were lost with Erling Braut Haaland’s air-kick and subsequent tumble, as if felled from a beanstalk. That was largely in keeping with a listless 90 minutes for the Norwegian, though he’s certainly earned the right to have a few of those. Nevertheless, Guerrero was on hand at the back post to make it 0-1. 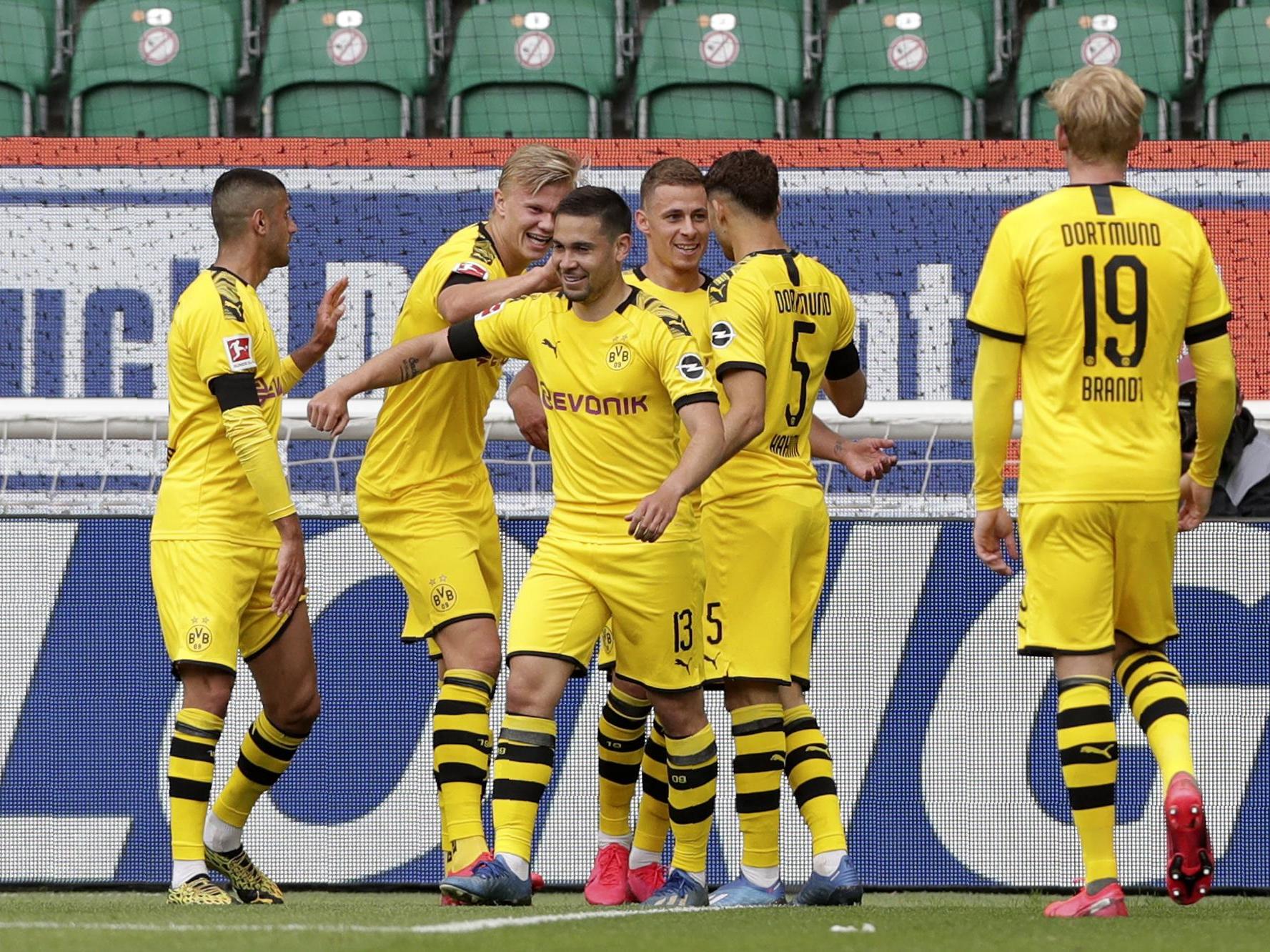 Similarly, Hakimi’s ninth goal of the season, with 12 minutes left, knocked the puff out of Wolfsburg just as they were starting to make Dortmund sweat. A counter-attack led by a fresh Jadon Sancho, who started on the bench with an eye towards Tuesday’s first-versus-second showdown, turned two on one to three on one as Hakimi arrived to the right and swept past Koen Casteels to settle it.

The hosts will rue a missed chance from Renato Steffen, who opted for power over placement when through on goal at the start of the second-half and clipped the bar when he should have found the net. But maybe the best reflection of good intentions going awry came with the dismissal of Felix Kraus on 83 minutes.

Kraus’ hounding of Manuel Akanji was meant to win back possession, not trample on the back of his calf as he attempted to plant a standing foot. The video replays were not quite so forgiving and a red card was produced on review.

It seemed accidental but undoubtedly one that could have caused serious damage. Luckily for Lucien Farve, Akanji – one of his few fit centre backs – was able to brush it off and complete the match.

To a man, they are unscathed and, as a collective, unwavering in their pursuit of the Bayern Munich. Regardless of what Eintracht Frankurt do on Saturday evening, all eyes will be fixed on Westfalenstadion come Tuesday.

England in Nations League group with Belgium, Iceland and Denmark