Is this the miss of the season?! Brighton’s Enock Mwepu skies the ball over from close range as he passes up chance to equalise in Wolves defeat – with Glenn Hoddle branding his technique like having ‘a wooden leg’

Brighton suffered a narrow 1-0 defeat at home to Wolves, but the result could have been very different if it wasn’t for one of the misses of the season from Brighton midfielder Enock Mwepu.

The Zambian international had a glorious opportunity to immediately pull Brighton level, just moments after Romain Saiss had put Wolves ahead just before the break.

Just a minute after Wolves scored, the hosts were awarded a free-kick on the right flank, giving them a chance to whip a dangerous ball into the box. 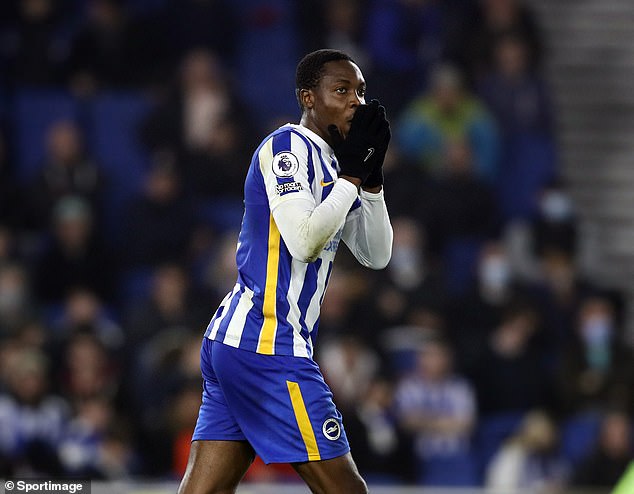 The centre-back, under pressure from a Wolves defender, couldn’t quite gather the ball and it bounced over to Mwepu who lacked the composure to score from point-blank range, as he lifted his effort well over the crossbar.

Mwepu fell to the ground holding his head in his hands, knowing he had missed a fantastic opportunity to level the score before the break. 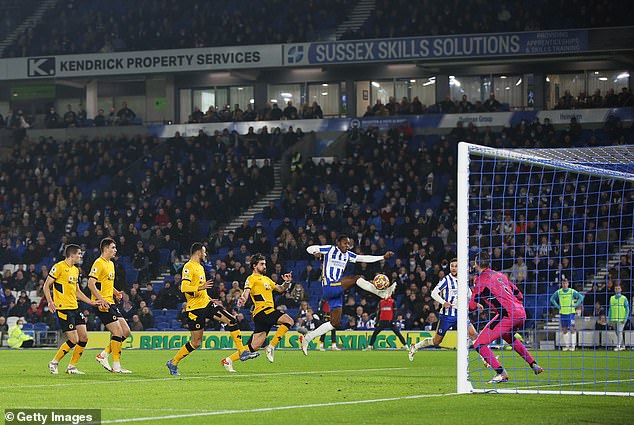 The 23-year-old’s technique was questioned by BT Sport pundits, as the midfielder got under the ball and shinned it into the grandstands.

‘The technique was like a wooden leg . He did not relax and oh my word what a miss that is.’

Steve Sidwell, who had two stints at the Seagulls said: ‘It s not one to show again. 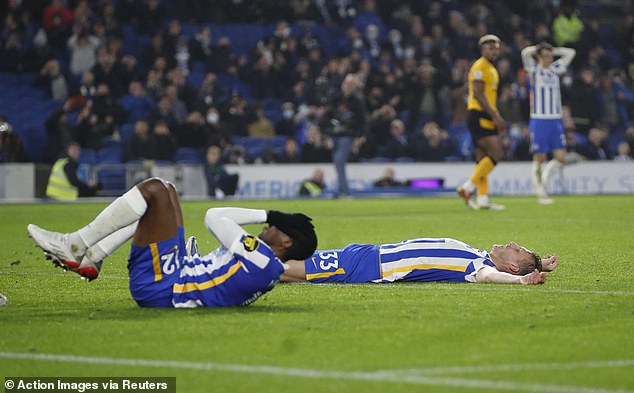 ‘It was a great strike from Trossard but the miss. It did come at him quite fast but bend the knee, he goes straight leg and it hits the top of the sock where his shin is.’

Mwepu has scored in the league for Brighton this season with a far more difficult effort, firing in a 30 yard screamer in their 2-2 draw with Liverpool at Anfield.

Brighton continued to push in the second-half but it was not Mwepu’s day as he fired over another chance when his first time effort from Moder’s free-kick flew over the bar.

Graham Potter’s side were unable to mount a comeback, falling to their fourth defeat of the season and have now failed to win a game in their last 11 league matches. 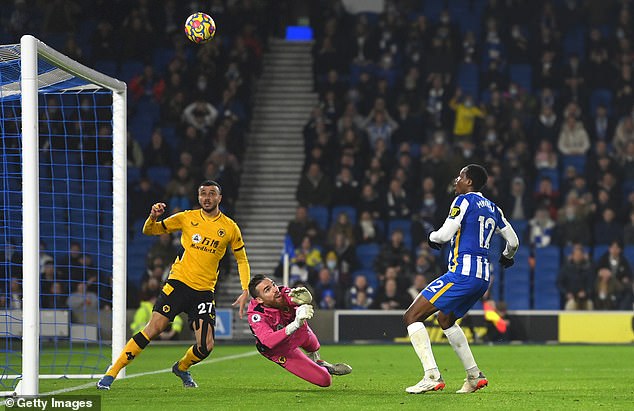 Unai Simon gifts Croatia the lead after BIZARRE own goal