A start to the campaign that had looked fine until the very end, when Trent Alexander-Arnold went off injured and holding his left thigh. It had otherwise been a quietly encouraging 1-0 win over Austria for England, despite the loud boos that accompanied taking the knee. Gareth Southgate will no doubt have to face questions about that, as well as the fact Tyrone Mings was somewhat fortunate to stay on the pitch, to go with Alexander-Arnold’s injury.

Then again, these campaigns rarely go without a few headaches and issues. The positives beyond the result shouldn’t go unmentioned, of course, and they were mostly in the form of match-winner Bukayo Saka and the magnificent Jude Bellingham.

Before all that, the boos had been so audible that they were impossible, and some of the players even looked taken aback by the initial sound around them before the Middlesbrough crowd eventually drowned out the dissent with encouraging applause.

Alexander-Arnold’s injury will no doubt become the big concern, though, which is all the more ironic given the discussion of the last few weeks.

Much of the early focus was always going to be on the Liverpool wing-back, which made the ending all the more notable. He didn’t start all that well, having blazed the ball over when there were other options in space. Later on, he miscontrolled the ball out of play.

He was far from the only England player who looked rusty or a bit ragged, though. That is the nature of these friendlies so soon after the club season ends. That was maybe most visible in Ben Godfrey’s second touch on coming on, which almost became a calamitous own goal. This isn’t to criticise the players given the context – although Mings should perhaps face some censure for a pretty bad poleaxing of Marco Friedl in the first half. Had VAR been in use, the Aston Villa defender would surely have been off the pitch.

He certainly made his presence felt. Austria otherwise found it difficult to get around the England defence, other than one moment when Christoph Baumgartner worked his way through. The defence was one area that generally worked coherently, as Marcel Sabitzer otherwise had to shoot from distance.

Elsewhere, it felt like England were a little dependent on individual inspiration to get things going. Hence Harry Kane dropping back even more, although some of his lofted balls were divine. It was his brilliant pass that put Alexander-Arnold through for that first chance of the game. The captain was probably one of England’s best performers along with scorer Saka and Jude Bellingham, although the rustiness could be seen in the fact that the Borussia Dortmund midfielder wasn’t quite as polished as he usually is. That could be seen in the second half when he took two Austrian defenders out of the game with a fine piece of technique, only to then just lose it himself.

He is only 17, mind, which only illustrates the immense scale of his talent. It is getting to the point where he is almost certain to start England’s opening game. There isn’t a midfielder in the squad as well rounded as Bellingham. He may well prove a crucial pivot for the team. 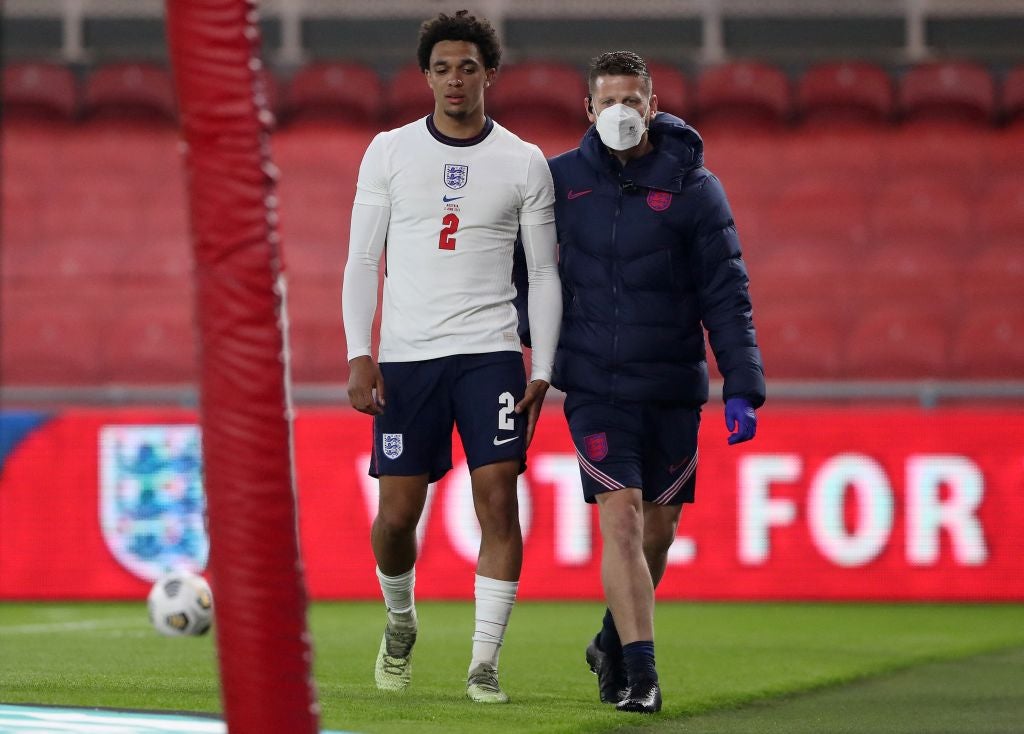 Grealish is one of those players capable of individual inspiration at any moment, but it was probably reflective of the timing of the game that he spent most of it fairly shackled. Some of it was because he was just kicked. It was possibly no coincidence that the eventual goal came with Grealish shunted to the ground after a typically incisive run. That had been set up by a clever touch from Jesse Lingard, with Saka then latching onto the loose ball for a tight finish.

As often happens in such occasions – and especially after months without a game together – the goal seemed to restore a lot of England’s composure. The moves were more flowing, even allowing for the stop-start nature of Southgate making so many substitutions.

It was just so unfortunate that Alexander-Arnold had to halt his game.

These build-ups never go completely smoothly, but the hope is this just ends up a minor issue for Alexander-Arnold, on what should have been a low-key win before the final send-off.