Wycombe now need a miracle to avoid relegation from the Sky Bet Championship after Kieffer Moore scored his 19th and 20th goals of the season to give hosts Cardiff a 2-1 victory.

Gareth Ainsworth’s Wanderers, who have struggled at the wrong end of the table all season, now have to win their last two remaining games, hope Derby lose theirs, and overturn a 13-goal deficit.

Wycombe were taught a lesson in clinical finishing by Cardiff’s Wales striker Moore, who netted in either half after Wycombe captain and former Cardiff player and boyhood Bluebirds fan Joe Jacobson had scored with a penalty. Cardiff finished the contest with 10 men after Will Vaulks saw red in added time.

Home boss Mick McCarthy left Liverpool loanees Harry Wilson and Sheyi Ojo on the bench after admitting he does not expect them to return to the Welsh capital next season.

Rubin Colwill made his first start, while captain Sean Morrison made a surprise return from injury and had to brush off an early arm knock.

Curtis Thompson headed well over for Wycombe in the game’s first chance, with Cardiff creating little until the 22nd minute when Moore gave them the lead.

The Wales striker did brilliantly to take the ball down on the right touchline before he cut inside and unleashed a powerful, low shot which found the bottom corner.

Marlon Pack then had a shot saved for the home side from a counter-attack, before Wycombe defender Anthony Stewart headed over. 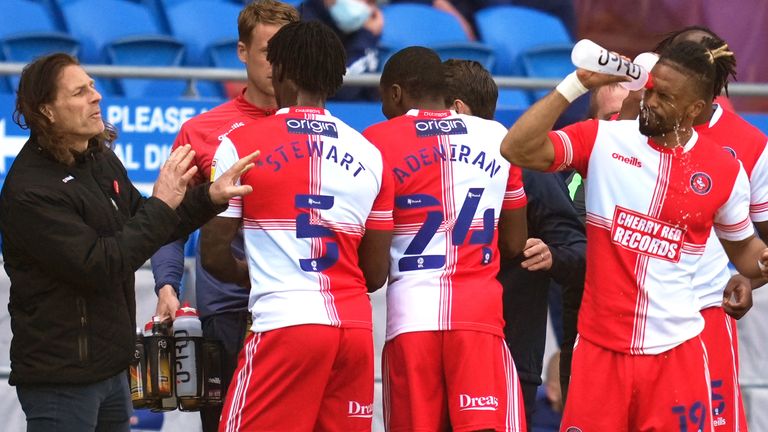 Curtis Nelson was booked for hacking at the legs of Thompson, while Wycombe’s Fred Onyedinma appealed for a penalty after going down under a Perry Ng challenge.

Colwill also shot into the side-netting but Wycombe equalised just before the break. Ng lost possession and Onyedinma drove forwards before he was felled by Morrison in the box.

Ng was replaced by Jordi Osei-Tutu for the start of the second half after his mistake led to the Wycombe goal.

Garath McCleary had the visitors’ first effort after the break and they carried more of an attacking threat than they had in the first period in what was a scrappy game.

Cardiff introduced Leandro Bacuna and Jonny Williams for Josh Murphy and Colwill in an attempt to liven up their attack. 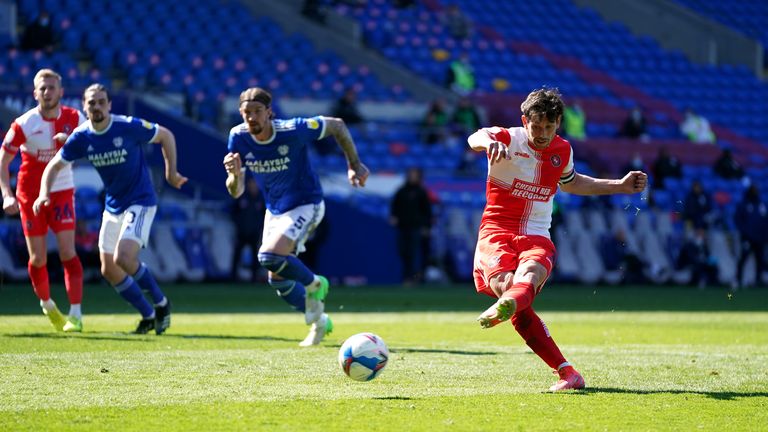 Wycombe striker Uche Ikpeazu had a shot saved by Alex Smithies before the visitors had the ball in the net. Onyedinma finished calmly, but Admiral Muskwe was penalised for colliding with Smithies.

It proved crucial as Moore then made Wycombe pay for their missed chances.

The ball was headed down by Ciaron Brown and, given space, Moore smashed the ball home.

Wycombe made a triple change to try and keep their hopes alive, but it was not to be despite their late pressure and Pack hitting the post.

Vaulks came on in the third minute of added time and was almost immediately sent off for a nasty challenge on Thompson.