The cash crisis that is turning sporting budgets upside down has seen players take pay cuts, broadcasters cut their rights fees and clubs and venues struggle for lack of paying patrons all over the world.

In all times of turmoil and upheaval there is both opportunity and unforseen consequences. And one group that could be said to have benefited from the belt tightening are locally developed coaches.

With money tight and budgets being trimmed across football departments, Australian coaches, and those who have learned their trade in this country and are already here, are looking like far more attractive propositions than expensive imported alternatives. 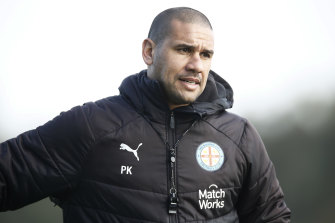 Perth Glory and Adelaide United are the latest two clubs to make a virtue out of a difficult situation.

The former has appointed former Socceroos midfielder and ex-Melbourne City and Glory player Richard Garcia as their new manager, succeeding Tony Popovic who has left and moved to Greece.

In South Australia, the Reds have confirmed that caretaker Carl Veart, another former Socceroos and Adelaide United star, will be the new permanent boss following the departure of Gertjan Verbeek.

In Melbourne, Patrick Kisnorbo, an ex-Socceroos defender and former Melbourne City captain, was given the job at City after Erick Mombaerts opted to leave and return to France because of the coronavirus crisis.

And former championship winning Melbourne Victory midfielder Grant Brebner saw off the challenge of John Aloisi, amongst others, to land the top position as the former champions look to rebuild.

Next season, 11 of the 12 A-League clubs will have Australian or locally developed coaches in charge. Newcastle Jets, with Welshman Carl Robinson at the helm, is the sole exception.

While the cash crisis is playing its part, it's not the only reason that clubs are becoming increasingly aware that going local is often the best option.

"How many foreign coaches have actually won the title? Not that many," said Phil Moss, the founding president of Football Coaches Australia, only half in jest.

The answer is three – Pierre Littbarski in the first season with Sydney, Vitezslav Lavicka, also with Sydney, and Gui Amor, with Adelaide. Mike Mulvey (Brisbane) and Ernie Merrick (two with Melbourne Victory) were British but learned their trade in Australia.

"Seriously, the local coaches have a lot of very positive points. We are seeing so many former top players now getting into coaching and bringing that top level playing experience to bear in their new roles in the game," he said.

"I think it's absolutely wonderful. Obviously the COVID situation has had an impact but it's not the only reason. But if this is what it has taken for local clubs to realise that the talent is here, then there is at least something positive to have come out of it.

"I have always been a fan of foreign coaches if their CV stands up and they come here and are prepared to invest time and effort."

Moss equally pointed out that not all those appointed in the past turned out to have had the requisite experience or talent and were not always as invested in the local game as they once might have been.