Ange Postecoglou and Celtic clinched the Scottish Premiership title on Wednesday (Thursday AEST) after a 1-1 draw at Dundee United, their 31st league game in a row unbeaten.

Celtic forward Giorgos Giakoumakis scored in the 53rd minute but midfielder Dylan Levitt equalised for Dundee in the 72nd.

Celtic, who also clinched the League Cup earlier in the season, wrapped up their 52nd top flight league title by moving to 90 points, an unassailable four-point lead with one game to play ahead of last year’s title winners Rangers.

Former Socceroos coach Postecoglou secured a seventh major trophy in his first season with the Glasgow giants, who finished 25 points adrift of bitter rivals Rangers in the previous campaign.

He will ;later this year become the first Australian to coach in the men’s Champions League with this year’s Scottish champions earning automatic qualification to Europe’s top table.

“I’m so proud of the lads, everyone at the club,” captain Callum McGregor told the BBC. 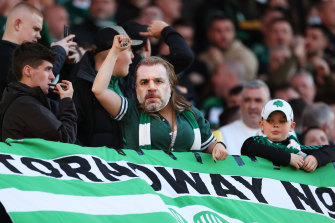 “It’s a new group and we’ve been absolutely relentless since day one.

“These scenes will live in my heart forever.”

Leeds United edged closer to Premier League relegation, meanwhile, after goals from Mason Mount, Christian Pulisic and Romelu Lukaku earned Chelsea a comfortable 3-0 victory, while Manchester City restored their advantage at the top with a 5-1 demolition of Wolves. 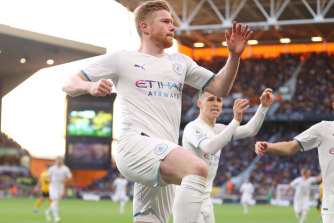 The Belgian put the game to bed with a hat-trick in a devastating 18-minute spell in the first half, before notching a fourth after the break as the away fans alternated between chanting “Kevin De Bruyne” and “Champions of England”.

The win leaves Pep Guardiola’s side top on 89 points, three ahead of Liverpool whom they also lead on goal difference, with the title now firmly in their sights.

Mount fired Chelsea in front inside four minutes, before a reckless challenge from Dan James saw him sent off 20 minutes later, leaving Leeds with a mountain to climb.

There only looked like being one winner from that moment on, with Chelsea putting the game to bed in the 54th minute as American forward Pulisic slotted home from the edge of the area, before Lukaku hammered in a late third to seal victory. 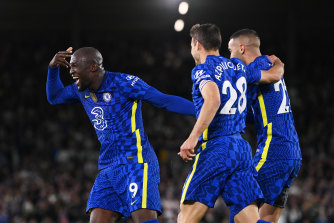 A third successive league loss for Leeds means they stay in the bottom three on 34 points from 36 matches, level with 17th-placed Burnley, who have a game in hand, making Sunday’s clash with Brighton pivotal for Jesse Marsch’s side.

Two of Leeds’ chief relegation rivals, meanwhile, played out a scoreless draw to do their own hopes few favours.

Relegated Watford ended a run of 11 straight home defeats when they held Everton to a goalless draw in a poor encounter at Vicarage Road, denying the visitors the chance to move further away from the relegation zone. 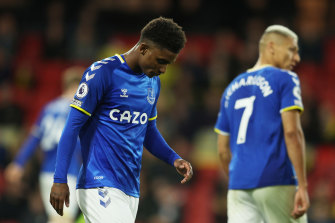 Everton’s Demarari Gray had the best chance of a torrid stalemate with Watford.Credit:Getty

The best chance of the game fell to Everton’s Demarai Gray, who skewed his shot wide from eight yards with the goal at his mercy as Watford kept a first home clean-sheet this season.

Everton move to 36 points from 35 games, two ahead of Leeds United in the third relegation position, with the latter having played a game more.

Watford made a number of injury-enforced changes to their side and had no lack of effort on the day they appointed new manager Rob Edwards, but as has been the case for much of the campaign, they did not have the quality to trouble the visitors.

Everton were perhaps too cautious in their approach, certainly in the first half, and it was not until the second period when they troubled home goalkeeper Ben Foster.

Former Watford forward Richarlison was able to find some space in the box and his deflected shot was well saved by the outstretched arm of Foster.

In a largely meaningless contest, Jamie Vardy scored twice on his return to the starting line-up as Leicester City moved into the top half of the table with a 3-0 home win over relegated Norwich City.

Sterling urges Government to act on lack of diversity in football