Cesare Prandelli resigned as Fiorentina manager on Tuesday, saying ‘darkness’ has crept inside of him and affected the way he sees things.

The move comes with Fiorentina in 14th place and seven points clear of the relegation zone.

‘With great sadness the club has accepted his decision, acknowledging that the reasons behind this go beyond football,’ Fiorentina said in a statement. 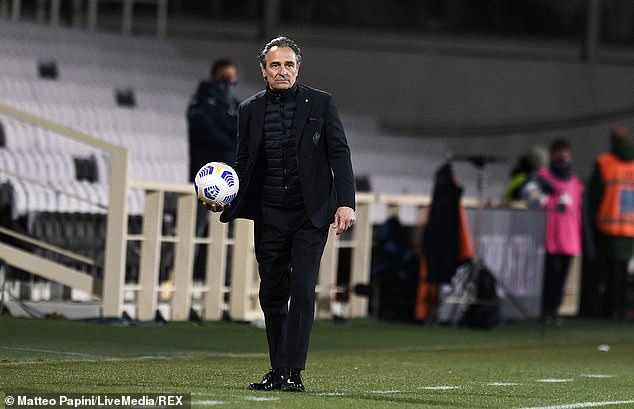 Prandelli was hired in November to replace the fired Giuseppe Iachini. It was his second stint at Fiorentina, having also coached the Tuscan club from 2005-10, leading the Viola to the UEFA Cup semifinals and the round of 16 in the Champions League.

Prandelli then coached Italy to the final of the 2012 European Championship and a first-round exit from the 2014 World Cup.

‘Over these months, a darkness has grown inside me and changed my way of seeing things,’ Prandelli said in a letter posted on Fiorentina’s website. 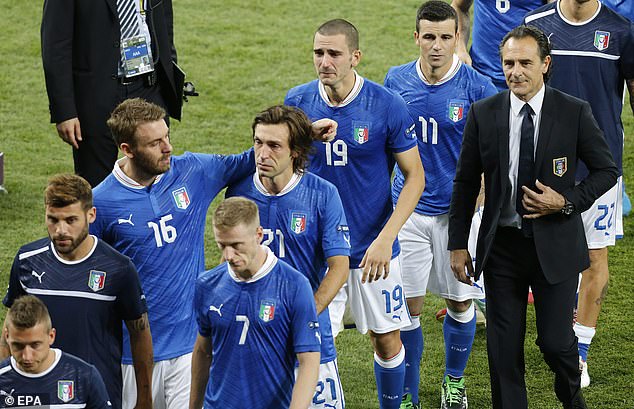 Prandelli led the Italian national side to the final of Euro 2012, where they were beaten by Spain

‘I came here to give 100% but as soon as I felt that this wasn’t possible anymore, for the good of everyone I’ve decided to step aside.’

The highlight of Prandelli’s second stint at Fiorentina was a 3-0 win at nine-time defending Italian champion Juventus in December.

No immediate replacement was named.

This is the second time I’ve left Fiorentina. The first time was not my decision, but this time it is. In life, as well as the good times, there are also dark moments which can get on top of you.

I have been going through a period of profound distress which is preventing me from being who I really am. I began this experience with joy and love, spurred on by the enthusiasm of the new owners. It’s likely that that my love for the city, and the memories of the great moments I’ve experienced here, made me blind to the early signs that something wasn’t right inside.

My decision has been guided by the enormous responsibility I have towards the players, the club and – last but certainly not least – to the Fiorentina fans, for whom I have great respect.

All players at this level have talent, and when you have talent you are perceptive – I wouldn’t want my distress to be picked up and affect the team’s performances.

Over the past few months, a dark cloud has developed inside of me, changing the way I see things. I came here to give 100%, but I now feel that this is no longer possible and therefore I have decided to step back for the good of everyone involved.

I’d like to thank Rocco Commisso and his wonderful family, Joe Barone and Daniele Prade, who have always been right behind the team and me. Most of all, though, I want to thank the people of Florence, who I know will understand.

I’m aware that this could be the end of my career as a coach, but I have no regrets and don’t wish to have any. The world I’ve been a part of for my whole life probably isn’t right for me anymore – I no longer see myself in it. I’ve certainly changed, but the world is moving faster than I thought too. That’s why I believe the time has come for me to stop being swept along, stop for a while and rediscover my true self once again.

Klopp: I don’t feel the pressure ahead of Man Utd