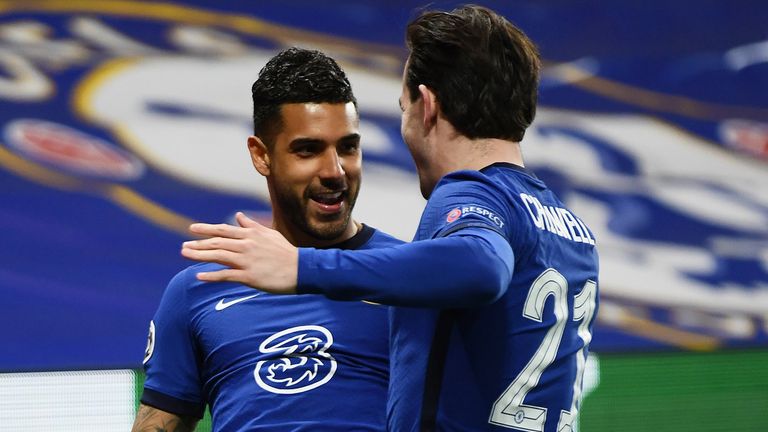 Chelsea progressed to the Champions League quarter-finals, beating Atletico Madrid 2-0 on Wednesday to complete a 3-0 aggregate win in the last-16 second leg at Stamford Bridge.

Olivier Giroud’s spectacular overhead kick separated the sides in Bucharest three weeks ago, giving Chelsea a valuable one-goal advantage that was added to by Hakim Ziyech (34) during the opening half.

The Blues extended their record of never having been eliminated from a European knockout tie after winning the first leg away from home to 14 occasions and frustration got the better of Atletico in the closing stages.

Stefan Savic was dismissed for violent conduct (81) after elbowing Antonio Rudiger as Emerson Palmieri came off the bench in stoppage time and scored with his very first touch to complete a professional job by the hosts.

It is the first time Chelsea have reached the Champions League last eight in seven years and they are yet to lose in 13 matches under Thomas Tuchel in all competitions, making this now the longest unbeaten start to a tenure by any manager in the club’s history, overtaking Luiz Felipe Scolari’s 12 games in 2008.

Man of the match: N’Golo Kante.

Chelsea prove too strong for Simeone

Atletico failed to manage a single shot on target in the first leg, but it took them less than four minutes to test Edouard Mendy for the first time on Wednesday, but Renan Lodi’s effort was comfortably gathered.

Chelsea did a good job of nullifying their opponents but were fortunate not to concede a penalty after 23 minutes.

Cesar Azpilicueta intercepted Luis Suarez’s through ball but his backpass to Mendy was under-cooked as the Blues captain subsequently appeared to impede Yannick Carrasco inside the box with an outstretched arm. 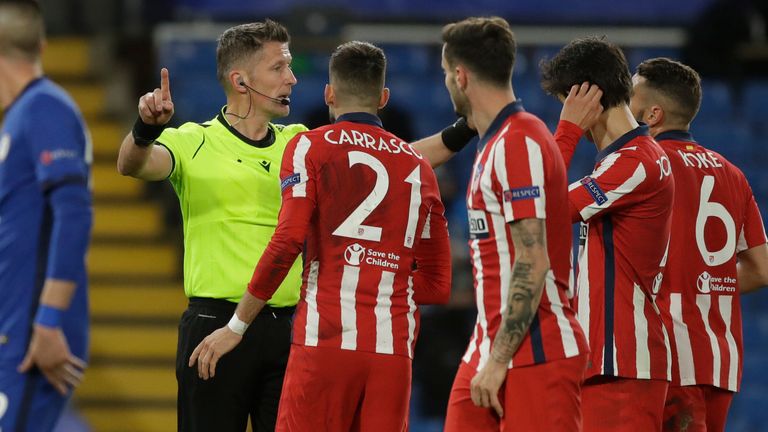 Referee Daniele Orsato was unmoved despite the vocal protests while the incident was not referred to VAR Massimiliano Irrati. Chelsea took full advantage of the reprieve 11 minutes later to stretch their lead through Ziyech.

The Morocco forward converted from Timo Werner’s cross, after the Germany star had grafted hard to launch the attack in the first place.

Werner sprinted wide to block Kieran Trippier’s attempted cross after a free-kick, with Kai Havertz latching onto the loose ball and sending it back into Werner’s path.

The former RB Leipzig hitman raced away and kept his cool to feed Ziyech at the far post, who slotted home for his first goal in 20 matches for Chelsea. 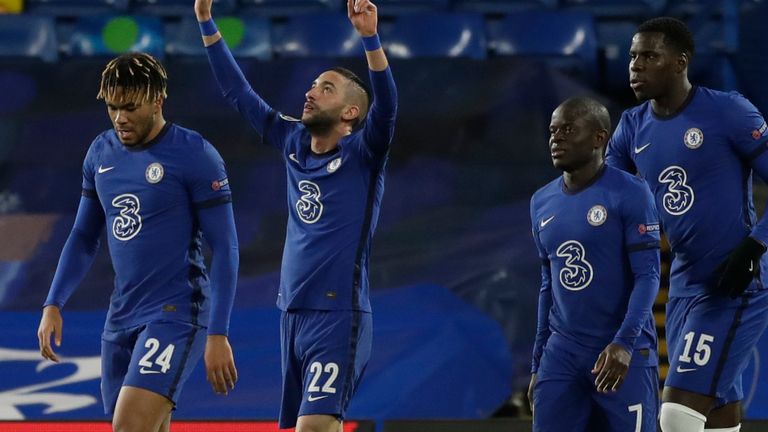 Diego Simeone wasted no time in seeking solutions at the interval, hauling off the hapless Lodi, but his replacement Mario Hermoso fared no better against the marauding Reece James. Chelsea had their opponents at arm’s length, defending from the front as Ziyech took James’ pass and saw a curling shot tipped over by Jan Oblak.

Andreas Christensen was out of the squad altogether through illness, with Chelsea having no central defenders on their bench. Kai Havertz again started in a false nine role, with Hakim Ziyech and Timo Werner adding the width.

Joao Felix and Luis Suarez both started for Atletico, with England’s Kieran Trippier in defence as Diego Simeone’s men sought to overturn a 1-0 deficit.

Suarez had cut an isolated figure, kept at bay by Rudiger as he was hooked on the hour-mark and replaced by Angel Correa – Simeone’s third change – but it failed to swing the momentum in Atletico’s favour. There were now spaces for Chelsea to exploit on the counter as Werner raced down the left and had Havertz in support but he went solo, firing wide of the angle of post and crossbar.

It wasn’t until the 76th minute that Mendy was drawn into action in the second half as Marcos Llorente found Joao Felix but the shot was parried out, with the impressive N’Golo Kante there to sweep the clearance to safety. 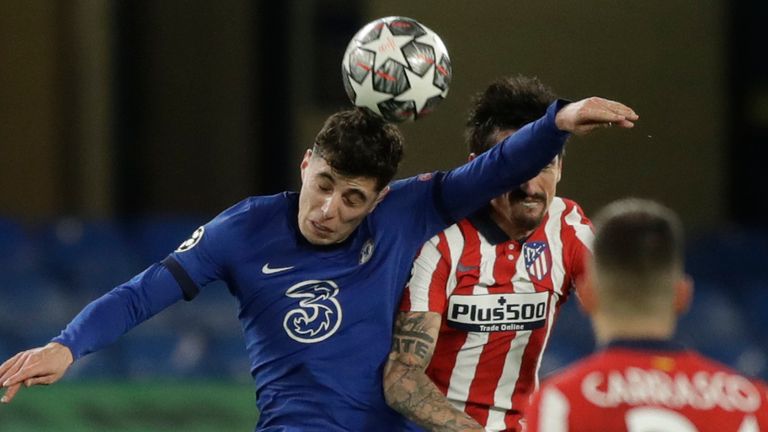 Chelsea managed the clock, but Atletico won a corner as another Felix shot deflected over. Savic went forward from defence and stood on Rudiger. An elbow to the ribs of the German centre-back in sight of referee Orsato brought an immediate red and with it went Atletico’s chances of progressing.

Tuchel looked to his bench in the closing stages and three substitutes were involved in a fitting final flourish as Callum Hudson-Odoi and Christian Pulisic combined to feed Emerson, who finished clinically to the left of Oblak.

Chelsea join Manchester City and Liverpool in Friday’s draw meaning three of the last eight are from England; having rolled the dice with a managerial change, you wonder if this could be 2012 all over again for the Blues.

What the managers said

Chelsea boss Thomas Tuchel: “It was a very good performance. Unbelievable team effort from the guys on the pitch, the guys on the bench, even the guys in the stands. You could really feel that we totally wanted it. We go through deserved. It’s a big win for us.

“The amount of effort and intensity, and the team work over both legs was fantastic. We missed four or five key players today in Andreas, Thiago, Mason and Jorginho. But the guys are totally reliable and the intensity is incredible. We played very bravely and can adapt to any system the opponents played today. It’s a deserved win and a big win as we’re now in the quarter-finals. I’m really happy for my players.

“The most important thing is that we give feedback to the guys in terms of their quality and that they feel it. They need to feel it from the manager and they play with a certain bond. Results like this you can only do with a special atmosphere. I’m sure no one wants to play against us. We’re already in the last eight which is already a big step but there’s no need for us to be afraid. We’ll prepare for it in the best way possible.”

Atletico Madrid boss Diego Simeone: “We worked hard to disrupt their rhythm but every time we regained the ball we couldn’t impose ourselves on them. There were many elements of our game that pleased me, and there was an improvement in our game in the second half. I was pleased with the character but we ultimately fell short.

“I’m really well. We have to accept this reality. We have to keep improving and growing. We gave our best effort tonight but it wasn’t enough.

“The fans will be feeling pain and disappointment but they will recover to think of the future. With work, we will get stronger and recover from this defeat. We had not one sense of fear. This is the Champions League. it’s difficult and we can up against a superior team.

“Always it’s better to win and to advance. We aren’t thinking of this as allowing us to focus on the league. We will continue with the same application and energy that we take into the game with Alaves.”

Man of the match – N’Golo Kante 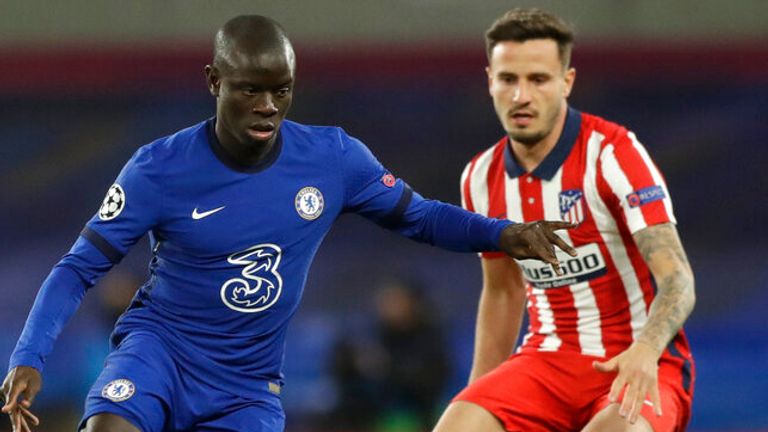 It was only the third time that N’Golo Kante and Mateo Kovacic were paired in the Chelsea midfield under Tuchel, more through necessity perhaps than design given the suspension of Jorginho, but Kante took his chance in his preferred role, protecting Chelsea’s back three.

Atletico were given no chance to build pressure on Mendy’s goal thanks to Kante’s vital contributions, making two interceptions and gaining possession on 13 occasions, more than any other Chelsea player.

Even in the fourth minute of stoppage time as Pulisic played Emerson in for the second, Kante was up in support, rolling back the years. He turns 30 this month, but Tuchel only sees his quality.

“I never know the age of my players, I judge them only by their performance,” he said. “It’s a pleasure to be the coach of him and it’s a big gift for me. He’s so humble and such a help around the pitch. Don’t underestimate his ability to run with quality and play under pressure. He alongside Mateo, they took all the weight on their shoulders and did a fantastic job.”

‘We can be happy about performance’ Ziyech scored his first home goal in 12 appearances at Stamford Bridge for Chelsea. He told BT Sport: “There were some difficult moments in the game but for most of the time we had it under control. It was an important goal and I had to wait a long time for it.

“It is always good when you go 1-0 up, especially when you make it by yourself. Timo’s delivery was good as well. It was a bit like seeing how the game would go for 10 minutes and after that we had control. We did well.

“They didn’t create a lot. We can be happy about the performance. Hopefully it will be a good opponent for the last eight.” 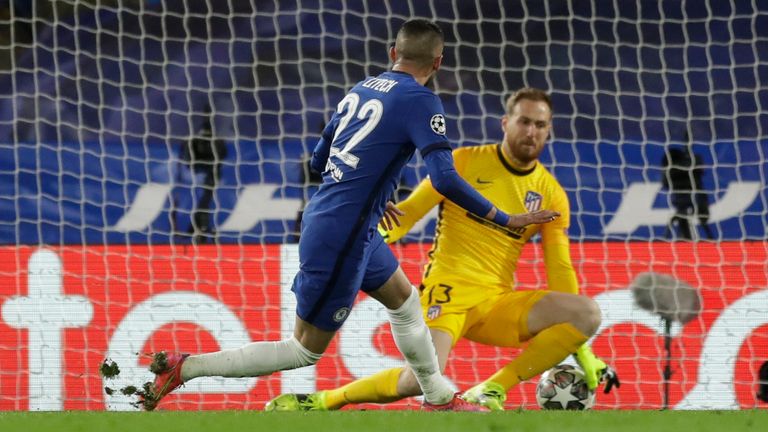 Chelsea host Sheffield United in the FA Cup quarter-finals on Sunday; kick-off is at 1.30pm. Meanwhile, Atletico Madrid are at home to Alaves in La Liga at 5.30pm.

Wright-Phillips opens up on receiving racist abuse from Spain fans

Real Madrid vs Eibar prediction: How will La Liga fixture play out tonight?