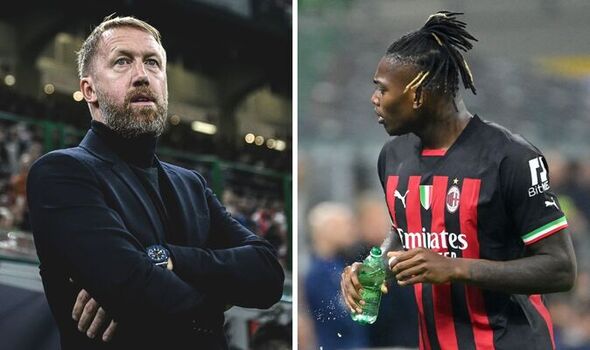 Two one-sided defeats (3-0 and 2-0) and undeniably given the runaround. It would be hard to justify overboard praise for any of AC Milan’s star players after two below-par performances against Chelsea but there is one mainstay in their side that looks the perfect fit for the Blues. Rafael Leao was the name in the spotlight heading into both meetings and while the exciting Portuguese international caught the eye in his competitive battle with Reece James on the flank, it’s Sandro Tonali who could actually end up being a better acquisition for Graham Potter.

That may seem crazy to say given that Tonali struggled to contend with Chelsea’s midfield at times but he looks like the perfect replacement for Jorginho, should his compatriot leave Stamford Bridge this summer when his contract expires.

Tonali is an orchestrator who can dictate the tempo of games from deep. In possession, there are not many tidier technicians in Europe, not least at the impressive age of 22.

He is press-resistant and has an eye for switching the play which is a complimentary quality for any team that operates with attacking full-backs – something that is one of Chelsea’s major strengths.

Undoubtedly, Leao is a box of tricks and while he is certainly easy on the eye with his unpredictable dribbling ability, it would be hard to see where he fits into this Chelsea side given their commitment to £47.5million summer signing Raheem Sterling.

The England international has been a mainstay under both Thomas Tuchel and Potter since arriving at the club and his place in the side is unlikely to be placed under threat anytime soon given he is deemed to be a key figure in Todd Boehly’s Chelsea project.

It would therefore not make much sense for Chelsea to go and splash mega-money on Leao, who would only create more complications in their quest for a settled and effective front-line.

He does not seem like a natural fit for Chelsea – a side that tend to switch between formations on a weekly basis since Potter was appointed in west London. Manchester City or Liverpool would arguably be better suited to his qualities.

Furthermore, AC Milan would require a premium in order to agree to a sale. A fee that is likely to exceed £70million after Chelsea saw a verbal proposal worth £60m rebuffed in the final weeks of the summer transfer window.

While Tonali is also unlikely to come cheap, there is huge value in his arrival if either N’Golo Kante or Jorginho depart next summer. As of now, their exits are looking increasingly likely with contract talks currently at a deadlock.

Jorginho’s agent was even spotted in Barcelona in the past week and the Catalan giants are believed to be interested in both Chelsea midfielders, who are free to negotiate with foreign clubs as soon as January.

The Italian wants to stay at Stamford Bridge but Chelsea seem unwilling to match his current demands as they prepare to explore the market for potential replacements.

In terms of profile, Tonali would be a ready-made successor and his influence on this AC Milan side is very similar to that of Jorginho at Chelsea.

He loves to take the ball off the back four and move it further forward and even though this was not his greatest showing in the 2-0 defeat at San Siro, there were still small glimpses of huge promise.

Tonali is now widely-respected as one of the best midfielders in Serie A and it’s clear that Chelsea need to focus their efforts on improving their options in the middle of the park.

Their defence is now virtually sorted after the signings of Kalidou Koulibaly, Wesley Fofana and Marc Cucurella and although there could be movement in attack depending on the futures of Hakim Ziyech and Christian Pulisic, midfield is next on Boehly’s agenda as he draws up plans for the January window.

Blowing an eye-watering fee on Leao seems more of a luxury at this stage when the reality for Potter is that a midfield dictator should be top of his transfer wish-list. Should that be so, Tonali ticks all boxes.