Chelsea have one foot in the Carabao Cup Final after a convincing 2-0 win that was as much earned as gifted. Taking advantage of a distantly lacklustre Tottenham Hotspur, who produced perhaps their worst performance under Antonio Conte, the 2019 winners bossed the opening 45 minutes before managing the second. The only blemish, perhaps, that they did not seize the opportunity to kill off the two-legged tie in this opening stanza.

The goals came in the opening 34 minutes. Kai Havertz’s fifth League Cup goal in just his third appearance came early and was supplemented by a disastrous own goal from Ben Davies, assisted by Japhet Tanganga, who had a game to forget. Adding an extra layer of pertinence was the reinstating of Romelu Lukaku to the line-up after his few days occupying the naughty step.

After a productive meeting with Thomas Tuchel on Monday off the back of an unproductive interview with Sky Italia that aired last week, Lukaku returned to the starting XI and picked up where he left off. There were boos as his name was read out from the team sheet. Not widespread to indicate total disapproval, but enough to suggest there were just as many unwilling to forgive as there were those keen to forget.

A goal would have been a welcome salve for all parties. Within a minute, the Belgian was driving from the right and laying a pass to Havertz when he should have had a shot. He also diverted a header just beyond the far post at the end of the first half, signing off with a scuffed shot in the fourth minute of additional time in what was otherwise a solid outing.

Nevertheless, within five minutes a mixed Stamford Bridge reception made way for united jubilation when Kai Havertz gave Chelsea the early lead. Tanganga, one of two changes from the Spurs XI that beat Watford, played a clumsy pass out from the back which was intercepted by Marcos Alonso, then had the ignominy of being bypassed by the Spaniard’s through pass. Havertz latched on, finishing via a deflection from Davinson Sanchez as both ended up in a heap of strewn bodies in the six-yard box. 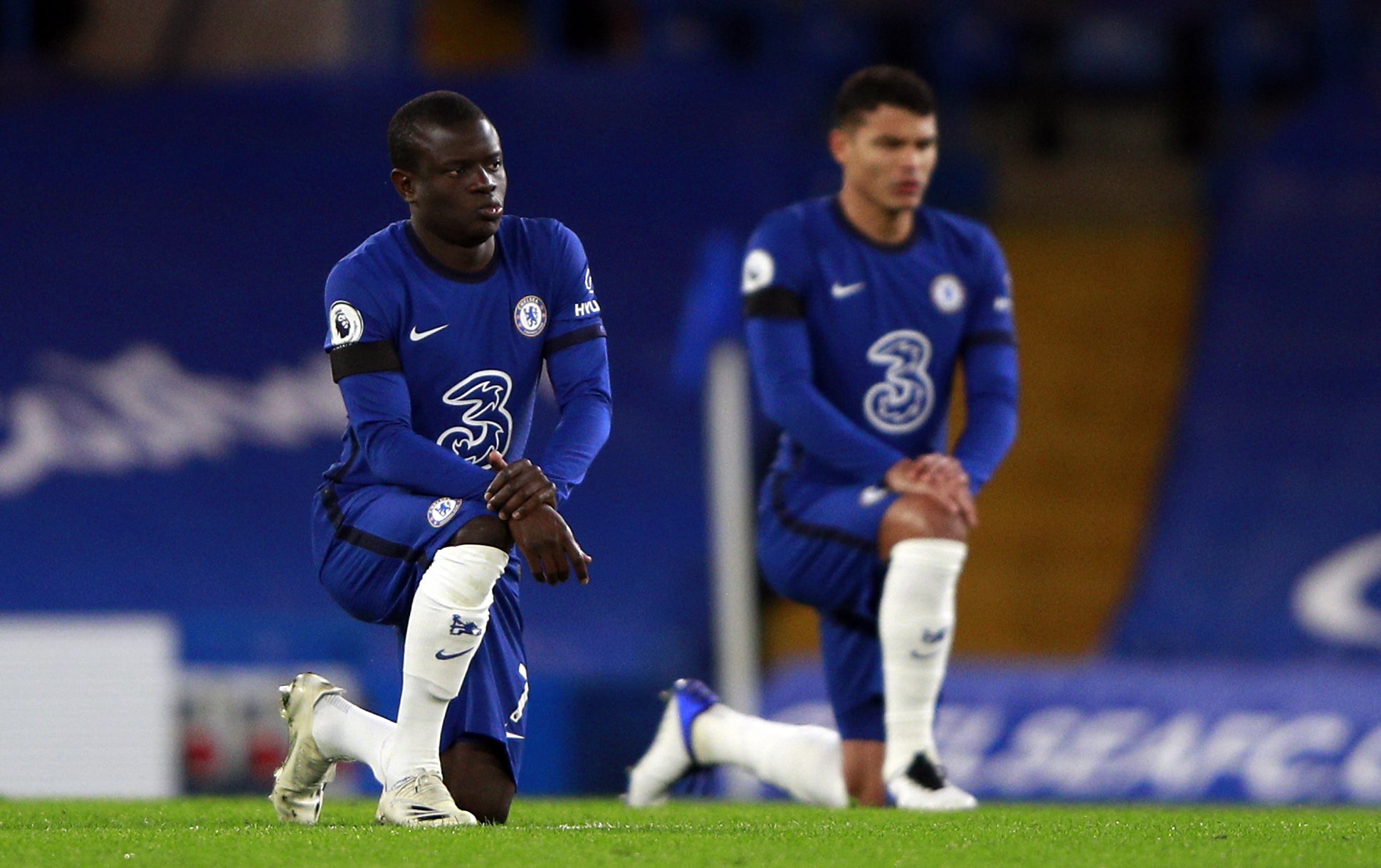 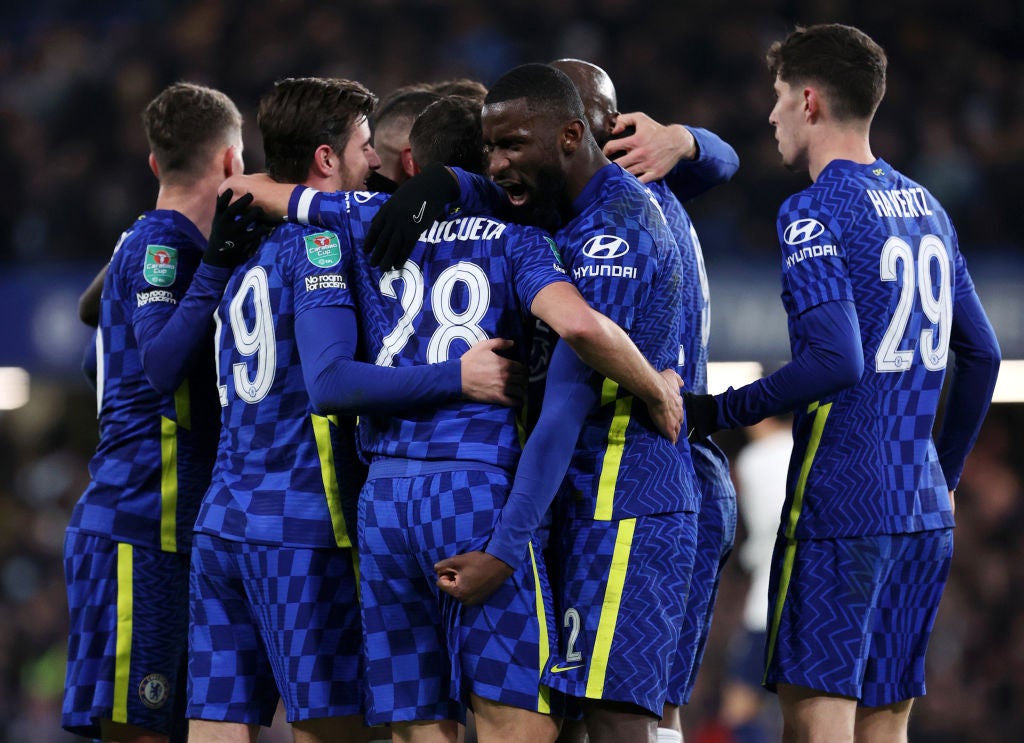 The goal and the resulting scene was indicative of Chelsea’s start. Despite their alterations themselves – including N’Golo Kante and Thiago Silva missing through Covid-19 – blue shirts flew out of the traps at the same gear they adopted for the thrilling two-all draw with Liverpool on Sunday. Conte, upon his return to the club he took to Premier League glory in 2016/17 was irked by the slapstick manner in which Spurs tried – and failed to keep pace.

Indeed, you will struggle to find something more comical in 2022 than Chelsea’s second. Ziyech’s free kick from the right sailed into a sea of white shirts, seemingly for nothing. Tanganga tried to clear the ball back where it came from rather than out of play, powering a header straight into Davies and past a static Hugo Lloris.

Inevitable half-time changes saw Spurs resort to a 4-3-3 from their 5-2-3 with Tanguy Ndombele replacing Matt Doherty to provide that extra man in midfield. They immediately posed a greater threat, albeit from an extremely low starting point. Harry Kane’s free-kick on 50 minutes – pushed away comfortably by Kepa Arrizabalaga – was the visitors’ first attempt of any kind. It ended up being almost their only shot on target.

That being said, a Chelsea third still looked the most likely. Ziyech had a free shot from the right-hand side of the box that went straight at Lloris, before Timo Werner – a second-half substitute for Havertz who sustained a broken finger in the melee following his goal – cut in and fizzed a shot beyond the far post. Those two combined for a more clear-cut chance on 66 minutes when Ziyech, after excellent hold-up play from Lukaku, threaded a delicious stunned through ball to Werner. Not for the first time, the German’s touch was lacking, and his attempt to lift the ball over an approaching Lloris easily clawed away.

Spurs would only muster their second shot on target with three minutes of normal time remaining. Substitutes Bryan Gil and Giovani Lo Celso combined for it: the former twisting and turning on the left and cutting back to the former for a sweeping side-foot that was kept out by Kepa.

There only crumb of comfort is that Chelsea did not find a third, despite an air of inevitability to every attack. The return leg next Wednesday is far from a dead rubber. But Tottenham will need to be 10 times better to have even a sniff of a first trophy in 14 years. One that came, funnily enough, in this competition against their opponents.

Victorian clubs on the road early