Chelsea have beaten other clubs to the signing of Thiago Silva because they can offer Champions League football, according to French football expert Julien Laurens. Silva left Paris Saint-Germain following the expiry of his contract after Sunday’s Champions League final loss to Bayern Munich. Reports claim PSG boss Thomas Tuchel wanted the 35-year-old to stay but sporting director Leonardo disagreed.

Chelsea boss Frank Lampard has been keen on bringing in experienced defenders this summer and Silva looks set to be the first through the door.

Silva, who turns 36 in September, is reportedly set for his Stamford Bridge medical on Thursday.

Everton were also linked with the centre-back, as were Serie A side Fiorentina.

But Laurens says the pull of playing Champions League football at Chelsea was too big.

JUST IN: Lionel Messi: Barcelona in crisis as superstar demands to LEAVE in transfer bombshell 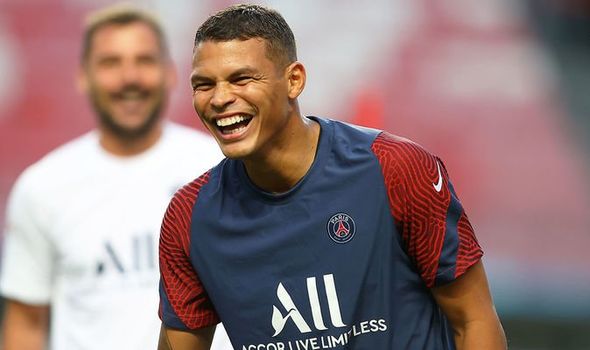 “I expect him to become a Chelsea player, to sign a two-year deal, whether it’s a one-plus-one or a straight two years that still remains to be seen, there are still a few details to sort out contract-wise,” Laurens told ESPN FC.

“I think he really liked the idea of going to Chelsea, discovering a new league in the Premier League, living in London as well of course, and being in that competitive environment of playing to win things, playing to compete for the Premier League title, playing in the Champions League as well.”

But Burley admits he may only be a short-term option for Lampard.

“We’ve talked about the centre-half position – all the other guys are out there chasing the top players as well,” Burley said.

“So you’ve got to get in quick, make a decision, make an offer, sort that position out and then worry about it in 12-18 months time about filling it again.

“You can’t sit on your backside and watch [Thiago Silva] go somewhere else and then start looking about for other centre-halves of that quality and experience because there aren’t many out there, there’s just not.

“So [the Silva deal] makes sense to me. It’s not ideal signing a 36-year-old but it’s a fit 36-year-old who’s got good character, great experience, and by the way, can still play.”

Robin Gosens: Who is the Atalanta left-back linked with Chelsea?