Chelsea are looking to include Levi Colwill as part of a swap deal that would see Marc Cucurella move ot Stamford Bridge, according to reports. The Brighton left-back is said to be keen on a move to Chelsea this summer.

Manchester City have shown strong interest in Cucurella. However, their move for the player has stalled after their opening offer fell way short of Brighton’s £50million valuation.

Transfer expert Fabrizio Romano says Chelsea are now confident of reaching an agreement with Brighton for the 24-year-old. And young defender Colwill is part of the negotiations to be sent in the opposite direction.

Chelsea are preparing a contract offer to Cucurella today and are in direct talk with Brighton. Cucurella was keen on a move to City earlier in the window.

However, the Guardian now claims he wants to join Chelsea and all that is needed is an agreement between the two clubs. That could happen soon as Chelsea have told Brighton they are willing to meet the asking price.

Cucurella has had just one season in the Premier League since joining from Getafe last summer. But he has already done enough to catch the attention of some of England’s top clubs.

City are on the search for a left-back following the departure of Oleksandr Zinchenko to Arsenal. But it appears they are not prepared to match Brighton’s asking price.

Chelsea, meanwhile, could be about to let Marcos Alonso join Barcelona. Cucurella would be a replacement for his fellow Spaniard and provide competition for Ben Chilwell at left wing-back.

Blues youngster Colwill impressed while on loan at Huddersfield last season. The left-footed defender, who can play at centre-back and left-back, has been linked with a permanent move away from Chelsea.

Express Sport understands Brighton are big admirers of the 19-year-old. Colwill has been at Chelsea since under-9 level but is yet to make a senior appearance for the club.

Tuchel spoke about Colwill last month and assessed his chances of being given an opportunity in the first team this season. He said: “Simply, I haven’t seen enough of him in our group because unfortunately he got a little injury and was out of training for several days. 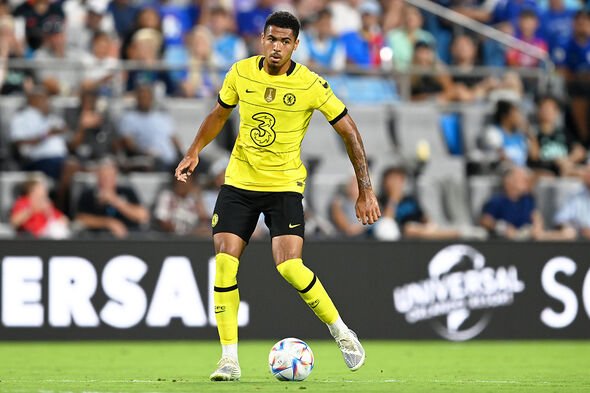 “And once you’re out for several days in pre-season, it takes a while to catch up again, especially for players who are not used to training at that kind of level like Levi. The fact he’s still here is very easy, we don’t know him enough so he needs to stay here, we need to have further impressions, we need more impressions of him to get a better outlook on the situation.

“He had a good spell on loan, and we need to think carefully at the end of pre-season what’s best for him. I can only repeat: like Trevoh Chalobah did last season and Malang Sarr, everybody is invited to do the same, this is the same situation for Levi.”

Chelsea have finally 'worked their youth system out' claims Ferdinand