Chile want FIFA to kick Ecuador out of the 2022 World Cup, claiming their defender Bryan Castillo is actually Colombian and not eligible to have played in their qualifiers

A World Cup legal dispute flared on Thursday with Chile challenging Ecuador’s place at the finals tournament over an alleged ineligible player.

The Chilean football federation asked FIFA to investigate its claim that Ecuador player Byron Castillo is actually Colombian and not entitled to have played in qualifying games.

The complaint comes more than one month after South American qualifying ended and Ecuador were drawn into a group with host nation Qatar, Holland and Senegal. 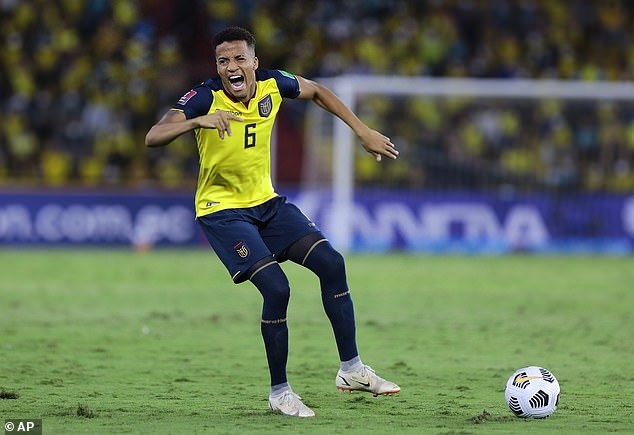 ‘FIFA can confirm that it has received a formal complaint from the Chilean FA in relation to this matter,’ football’s governing body said in a statement.

FIFA gave no timetable for a possible disciplinary case ahead of the World Cup kicking off Nov. 21.

Ecuador finished fourth in the 10-nation South American qualifying group to advance directly to Qatar. Fifth-place Peru has a play-off game next month against Australia or the United Arab Emirates.

Chile placed seventh, seven points behind Ecuador, but argues it could advance if games involving Castillo were forfeited.

The FIFA rules in cases of ineligible players require results to be overturned as a 3-0 loss. 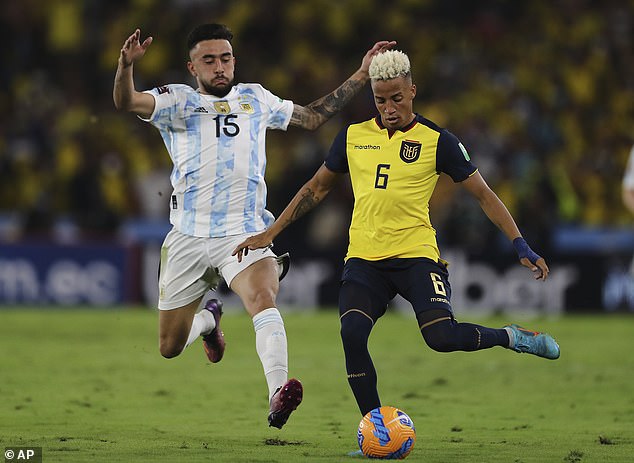 Ecuador were drawn in a group with host nation Qatar, Holland and Senegal for the World Cup

In South American qualifying for the 2018 World Cup, Bolivia forfeited two games in which it fielded an ineligible Paraguay-born player as a late substitute.

Bolivia lost an appeal at the Court of Arbitration for Sport which said FIFA was right to investigate even when protests were filed weeks after the games were played.

FIFA wrote stricter rules for the 2022 World Cup requiring all players in qualifying games to produce a ‘valid permanent international passport’ for inspection by match officials.