Pep Guardiola knew what was coming long before kick-off. Perched on a seat in the opposition dugout, he was drawn to the shouting and hand-slapping that was aiming to create a fire.

Everton, he could see, were pumped up and ready. In those early minutes of this FA Cup quarterfinal, their approach was exactly what he anticipated. 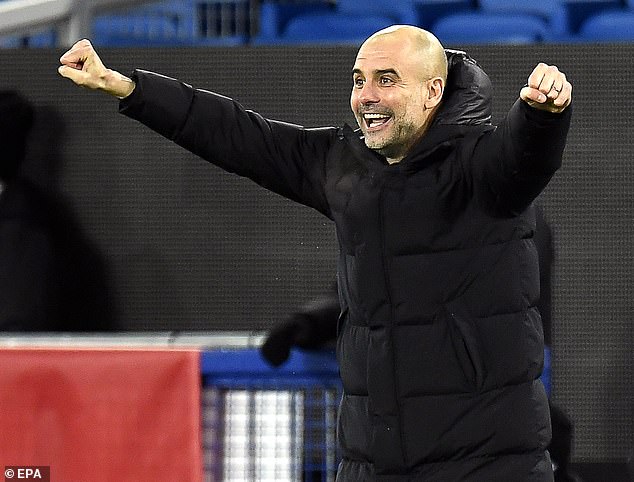 Allan scampered and scuttled about, making every challenge count. Sometimes he crossed the line, triggering noisy protests from Guardiola’s entourage. There was nothing overzealous about Everton’s approach, they were well within their rights to try to unsettle City.

The problem was, though, they never did. Everton ran around at times like an overexcited puppy in a park. They wanted to fluster City but, in their attempts to do so, they forgot about trying to play football.

While they expended energy, City glided around as graceful as swans. Eventually Everton blew themselves out. It was later than Guardiola might have expected but the result, really, was never in doubt. They danced around the ring and waited for the opening. 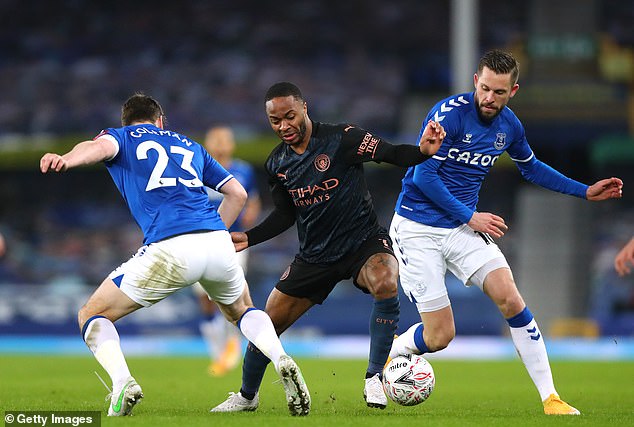 Once it arrived, that was it: bang, bang. Two goals, game over. We know all about City’s majesty with the ball and have saluted how Guardiola has transformed them this season but not enough credit goes to their toughness.

There used to be a suspicion that City would fold under pressure but not any more. This team will not be bullied. ‘You need this characteristic,’ explained Guardiola.

‘Adapt, adjust and play the games you need to play. I saw the warm up, I was sitting five metres away and saw how they shouted every action.

‘I saw how they communicated, high five every time. They were ready. It was a game like we expected to play. Intensity. We knew it. You have to handle this and this is the game we are going to play in the semi-final of the FA Cup, against Dortmund, the (Carabao Cup) final against Tottenham.

‘This is going to happen. If you cannot maintain that level, they bite you and you don’t win. There will be more games like this than other ones. You have to learn and know exactly what you have to do.’

Guardiola said he will use the first week of the international break to recharge and clear his mind, ahead of the defining months that could see his team rewrite the history books.

He knows talent alone will not get them through the challenges that come through spring. It is City’s durability, however, that gives them this outstanding opportunity to make history.

From the last international break in November to where we are now, City have played 34 matches in 119 days. They have won 29 times. Yes, they have been expensively assembled — Saturday’s bench cost more than £400million — but money means little when limbs are aching, legs are heavy and the hamster wheel of this campaign will not stop spinning.

The desire to create history comes from within and, when Everton squared up as if they wanted a fight, City simply glared back and stared them down. Carlo Ancelotti called City ‘the best team in the world’ and it seems they can do everything.

‘The opponents know that we are going to press and not let them breathe,’ said Guardiola. ‘When you have Richarlison and (Dominic) Calvert-Lewin, it is a good alternative because they make that ball and attack the middle and run in behind.

‘They are incredibly dangerous but we controlled it. They are so tall and aggressive at set pieces. Every throw-in is a corner, so anything can happen.

‘But in terms of control we didn’t concede much. This game must be played the way we play it. Don’t make mistakes and the moment will come — maybe the 90th minute, maybe in extra-time. 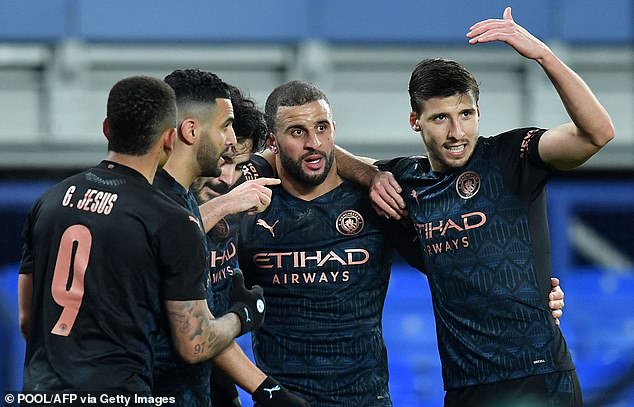 ‘But don’t do what happened with the first goal against Manchester United.

‘In these kind of games it is so important (to concentrate), it is a final. You can lose in the League but this is a final. Every game is closer to winning titles but still there are many, many games.’

But City keep ticking them off, relentlessly. There will be bigger challenges ahead than Everton, who visibly drained of conviction the longer the game went on.

Perhaps if Oleksandr Zinchenko had not been well placed to clear Yerry Mina’s first-half header off the line, it might have been different. Most likely, though, the final outcome would have been the same.

‘This game in one corner, one throw-in, one situation where they scored a goal maybe we would have not been able to overcome,’ said Guardiola.

‘But the spirit and the commitment is fantastic. I’ll never forget what we achieved in these four months.’

Show this same fighting spirit in the next six weeks and the season will be unforgettable too.

Kerr on target for Chelsea