The Italian government is moving toward having soccer matches played behind closed doors in affected areas as authorities try to contain a spreading virus that has made northern Italy the focal point of the outbreak in Europe.

Civil protection officials said at least 229 people have tested positive for the coronavirus in Italy. 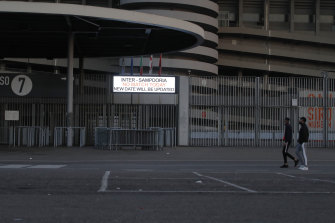 A notice outside the San Siro stadium advises that the game between Inter and Sampdoria has been cancelled.Credit:AP

State television on Monday night reported the seventh death of an infected person – all of whom had pre-existing medical conditions and were elderly.

Inter Milan announced on Monday that its Europa League match against Ludogorets will be played at the San Siro without fans in the stands.

The decision was widely expected and Ludogorets had announced shortly before that Inter had sent them a letter stating that the city's health authorities have allowed the match to go ahead behind closed doors.

Ludogorets added that UEFA has said it is monitoring the situation and will react immediately if anything changes.

Italy's football federation (FIGC) said on its website that it had made the request to the government for matches to be played without fans in attendance "to safeguard the sporting competition" – noting there is little time for make-up dates considering all elite soccer competitions must be completed by May 24 because of the European Championship.

Sports Minister Vincenzo Spadafora also proposed the closed-door plan to Italian Premier Giuseppe Conte – although no final decision had been made.

"Playing all sports behind closed doors for the next week could be possible, because then fans can more easily stay at home," said Maurizio Casasco, the president of the Italian federation for sports physicians.

"But the clubs have to be in agreement.

"There's more than just soccer in Italy. It's an issue that regards all sports."

Four Serie A games scheduled for the previous round on Sunday were postponed, including Inter's game against Sampdoria at the San Siro.

Turin-based Juventus are scheduled to host Inter on Sunday in the return of former coach Antonio Conte.

Other games scheduled for northern Italy on the weekend include Udinese-Fiorentina on Saturday and AC Milan-Genoa on Sunday.

With fewer concerns in southern Italy, Napoli's Champions League match against Barcelona at Stadio San Paolo in Naples on Tuesday was slated to be played as planned.

Serie C cancelled all games in its leagues, which have teams in the north.

Volleyball and rugby games were also suspended nationwide through next weekend.