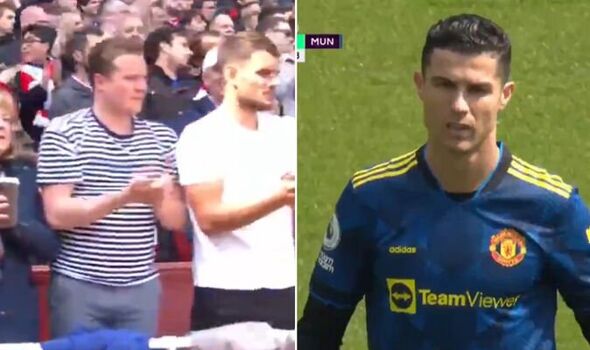 Manchester United ace Cristiano Ronaldo was applauded by Arsenal fans at the Emirates Stadium on Saturday just days after announcing the death of his baby son. Gunners fans took to their feet in the seventh minute to pay their respects after Liverpool fans had done the same in midweek following the tragic news.

Ronaldo and his partner Georgina Rodriguez were expecting twins. The Portugal forward revealed, however, that the baby girl had been born but the baby boy had sadly not survived. And the player was given compassionate leave by the Red Devils amid an outpouring of support from the football community.

Ronaldo missed United’s defeat by Liverpool on Tuesday night as Reds fans paid their respects. The ace then returned to the starting line-up as the Red Devils looked to get back to winning ways at the Emirates Stadium. And fans in north London followed Liverpool’s lead as they applauded Ronaldo for a minute.

The television cameras showed Ronaldo as the applause was taking place. And the 37-year-old looked appreciative of the gesture.

For the latest news and breaking news visit:/sport/football