Report and free match highlights as Sergio Aguero scores his second Premier League goal of the season; Ferran Torres follows up 83 seconds later to round off victory; Man City will win the Premier League title on Sunday if Man Utd lose to Liverpool 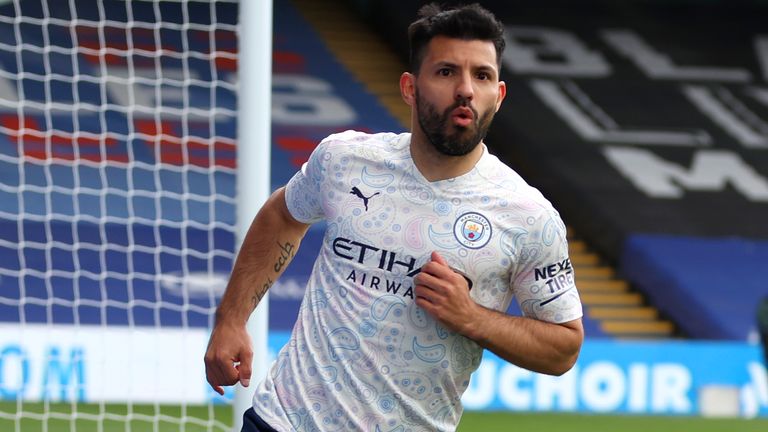 Quickfire goals from Sergio Aguero and Ferran Torres have put Manchester City on the brink of the Premier League title after beating Crystal Palace 2-0 at Selhurst Park.

Pep Guardiola made eight changes from the midweek victory at PSG and it showed in the first half as City failed to register a shot on target.

Gabriel Jesus had a goal ruled out for offside, while Palace also had chances of their own, beating City’s tally for on-target efforts (2) in the opening 45 minutes.

But 12 minutes after half-time, Man City had their first two shots on target – both of which resulted in goals. The first was an emphatic finish from Aguero (57) into the roof of the net before Torres (59) fired home from the top of the area 83 seconds later to seal the victory.

It sees City put one hand on the Premier League trophy. They will secure their fifth Premier League title if Manchester United lose against Liverpool on Sunday, live on Sky Sports. For Palace, it is a third successive league defeat – although all against teams in the top four – and keeps them in 13th place.

Crystal Palace are back on Sky Sports next Saturday when they travel to Sheffield United in the Premier League; kick-off 3pm. Man City face a huge midweek game when they welcome PSG to the Etihad on Tuesday in their Champions League semi-final second leg. They will then face Chelsea on Saturday in the Premier League, live on Sky Sports; kick-off 5.30pm.

FA Cup draw: When is the semi-final draw? Ball numbers with Man Utd, Chelsea in hat