The elephant in the room is immediately addressed and by Roy Hodgson himself, who is only too aware of the alarming statistic concerning Crystal Palace’s star man Wilfried Zaha.

That is probably because the Palace manager has been asked about it so many times. But in case you did not know, the Eagles have now lost 18 of their last 20 Premier League games in which Zaha has not played, and equally worrying, they have failed to score in 16 of those 18 defeats.

All of which makes the forward’s absence with a hamstring injury – confirmed by Hodgson – for the Monday Night Football clash at rivals Brighton so crucial for a Palace side looking to bounce back after successive league defeats to Leeds United and Burnley.

Hodgson, however, sees it differently and believes the unavailability of the Ivory Coast forward at the Amex on Monday evening is actually a chance for his players to finally show they are not a one-man team.

“It will be too soon, it was quite a nasty muscle injury he got, so once again we will have to go into the game with the sword of Damocles hanging over us in the fact that if we do not win it, it will be because Wilf is not there,” he told Sky Sports. 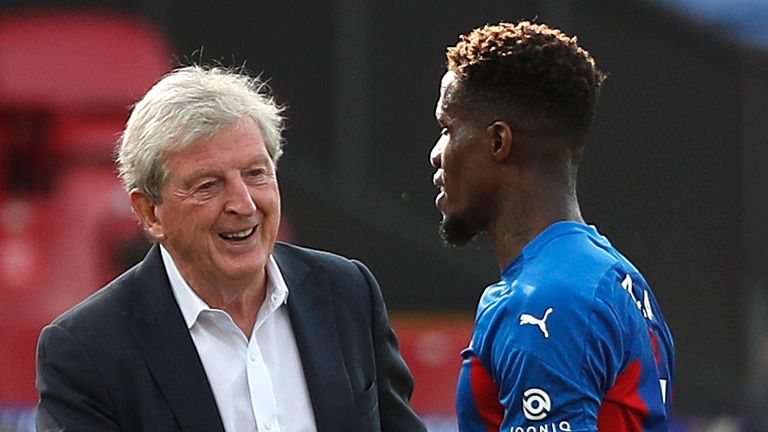 “He has been so unbelievably influential during my time at the club, he has done a fantastic job for us, he has contributed and helped us every year to get us to where we’ve been, i.e. outside the relegation zone and looking forward to another Premiership year.

“But the fact is we must find a way of making certain it is not a case of if he does not play, we cannot win because the fact is these other players have a lot of talent and skill too and we cannot deny the fact or criticise anyone for making the fact known, or asking me the question what about it. I do not complain about that.

“But certainly the players, I know will be a little bit disappointed to feel it is as simple as Wilf plays we win, Wilf does not play, we don’t, because they know that injuries happen and you have to learn to deal with it.

“But we are not alone, when clubs miss their best player. When Harry Kane has not played for Tottenham, there has been more difficulty for them to get results.

“But it is a fact we have to try and deal with and if we want to get that monkey off our back, then we had better start winning games when Wilf is not there.”

No Wilf, no win

Crystal Palace have lost 18 of their last 20 Premier League games in which Wilfried Zaha hasn’t played, with the Eagles failing to score in 16 of those 18 defeats

Zaha, 28, has scored nine goals and contributed two assists in his 19 top-flight games so far this campaign, impressive attacking numbers that are always going to be hard to replace.

However, it is at the other end of the pitch where uncharacteristically, Palace’s back line has been porous, letting in the joint-second most league goals this season.

Last time out, Hodgson watched on in disbelief as his side shipped three at home, including two in the opening 10 minutes, to a Burnley team who had previously struggled badly for goals on the road this campaign.

“It is a combination of factors,” Hodgson said when trying to put his finger on Palace’s recent defensive woes.

“Our defending this year, at least in the latter part, it was OK in the beginning, we are conceding too many goals and as a result, we have a very poor goal difference. “You put it down to the fact that in certain situations we have not defended very well, the fact that you have got a lot of players missing and you have to chop and change and not get that stability we have had at the back over a number of years can play a part.”

One thing Palace must stop doing, though, is letting in early goals which then forces them to go chasing matches, according to Hodgson.

“We have gone down in the games early on and as a result, you are then chasing the game to get back in it,” he said. “And the Premier League is full of teams who when they get their noses in front, know how to protect a lead and ask a lot of questions of you on the counterattack.

“There are so many factors to take into account – it would be much easier if you could just put your finger on it and put it down to one blatant thing that is happening in the game.

“Why do we make the mistakes early on? I do not know, but it will change.”

Who better to get back to winning ways against than Brighton, although Palace could not have picked a worse time to face their rivals, who are currently on their best unbeaten top-flight run since November 1981.

Hodgson, though, is well aware of the challenge his team face on the south coast on Monday evening against opponents so adept both with and without the ball.

“He [Graham Potter] has done an excellent job there, the whole club has been very good since fighting relegation last year and securing their place,” said Hodgson.

“So we have enormous respect for them, we know they are a very good team, they are well balanced and defensively, they do not concede too many goals, they work very hard and are a young and energetic team.

“But they are also very good technically, as you see by their ability to keep the ball – they are a possession-based team. They look to make certain they keep the ball in the same way Man City do, which is why I am not surprised Pep (Guardiola) singled Graham out like he did.

“Unfortunately, the problem they cause you is when they have the ball, they are not easy to get it back from as they are technically gifted. They send players forward in attack, they are always buzzing around looking for spaces and the gaps you may leave and to punish you for leaving those gaps.

“But unfortunately they are equally as good when they do not have the ball, they do not give you any chances, they defend very well and make it hard for you to score.”

Palace do head to the Amex with a healthy 10-point cushion over Fulham in the relegation zone as we enter the final 14 games of the season, meaning another Premier League campaign is all but secure.

However, whether Hodgson – who is the oldest person to ever manage in the Premier League and recently became just the 10th coach to take charge of 350 games in the competition – will be in charge at Selhurst Park next season is still not known.

The former England manager, 73, signed a new 12-month contract last March, but for now is just concentrating on Palace’s climax to the season, starting at Brighton on Monday.

“It is not a week-to-week thing,” Hodgson said. “As far as I’m concerned, what I said last week and probably the week before that and going back a month or two ago, I’m more than happy at the moment just to carry on. I’m not certain what the future is going to bring, either for me, or the club, and I’m not certain what I would think is the best thing to do come the end of the season.

“What I’m looking forward to doing is continuing to work with this team until the end of the season to ensure we get the best table position we can get.

“And then when that has been achieved will be the time to make a decision, but I do not know why I should feel obliged to make a decision now about what I would like to do with the rest of my life. I think I will push that forward to the day when a decision absolutely has to be made.”