Football’s behind-closed-doors return has provided an intriguing insight into Mikel Arteta’s hands-on approach to coaching. His instructions, shouted continuously from the touchline, have been audible in every Arsenal game. And there’s one name which crops up more than most.

Dani Ceballos has arguably been Arsenal’s outstanding player since the restart. Only Pierre-Emerick Aubameyang has played more minutes. Nobody has had more touches. His first-half performance against Leicester earlier this month was described as a “masterclass” in vision and execution by Sky Sports pundit Jamie Redknapp and there were more eye-catching moments in Saturday’s FA Cup semi-final win over Manchester City.

That technical quality is what Ceballos is known for. It made him one of the most exciting young players in Spain as a teenager and earned him a move to Real Madrid aged 20. At Arsenal, though, in an unfamiliar role at the base of midfield, he is required to contribute a lot more than just skill and flair.

It helps, then, to have a manager – or míster, to use the Spanish term – who is always watching his back.

“The míster is living the game constantly,” Ceballos tells Sky Sports with a smile. “We know it’s a plus for us to have someone next to the pitch who can see things we can’t see at certain moments, and he can communicate with us much quicker now that there is nobody in the stadium.

“He is using me in a position which is unusual for me, as a pivot in front of the defence next to Granit (Xhaka), so I think it’s good that he is helping. Someone who is looking at the pitch from the outside can see all 22 players and give better advice about the best positions to be in.” As well as creating more chances and completing more dribbles than any of his Arsenal team-mates since the restart, Ceballos ranks top for both tackles and interceptions. He has even covered the most ground. “I’m really happy with the way he is evolving,” said Arteta recently.

Ceballos is happy too. That much is clear from early on in our conversation. “I’ve felt very comfortable at this club from the beginning,” he says. “The fans accepted me very well and my team-mates made everything easy for me. I don’t regret my decision to come to Arsenal in any way.”

That said, the season has not always been easy for him.

Ceballos completed his loan move from Madrid last July and introduced himself at the Emirates Stadium with two assists in a 2-1 win over Burnley a few weeks later. But a hamstring injury caused him to miss the end of Unai Emery’s reign and he did not immediately feature under Arteta.

There were even rumours that he might leave the club prematurely in January. “Of course, when you get an injury and you don’t play, you start to get a few doubts,” he says. “But I spoke to the míster and we agreed find a way forward together. He told me he knew me very well and that he had followed me a lot in Spain. He supported me a lot.” 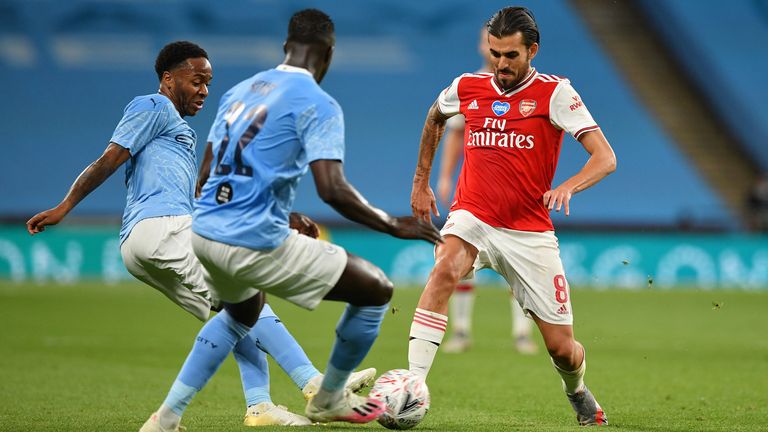 Ceballos loves English football. He has loved it from the moment he heard his name ringing around the Emirates Stadium during that win over Burnley in August. “I am a player who likes to be close to the fans,” he says.

But it was a challenge to adjust to its intensity. After the early high of the Burnley game, there was a disorientating 3-1 loss to Liverpool at Anfield during which he was withdrawn, exhausted, after only an hour.

“I found it difficult to adapt to that and get used to the rhythm of the game, which was more or less what I expected because I knew the speed was going to be very high. But after my injury, I came back and reached a very good level. Since then, I think I’ve made a lot of progress physically as well as technically.”

That progress was certainly apparent at Wembley on Saturday, where he ran himself into the ground in front of Arsenal’s defence before his 88th-minute substitution. But the turning point, he says, came during the squad’s warm-weather training camp in Dubai in February.

A Villa vs Arsenal

“The truth is that I worked so hard out there,” says Ceballos. “I trained to my limits and now I have a very high physical level. That, combined with the part of my game that the míster likes, which is having the ball and being a protagonist, means I’m now a player who fits into his team.

“Since we came back from Dubai, I have played practically every minute with him. That’s been thanks to him, but also thanks to what I have done and what I have demonstrated on the pitch. I told him, ‘Look, I want to show that I can play here.’ I think I have done that.”

The question now, though, is for how much longer?

Ceballos is certainly open to the idea of staying at Arsenal beyond the end of this season. The 23-year-old is a popular figure around the club and Arteta has already confirmed that talks with Real Madrid are under way. But money is tight in the present financial climate and Ceballos insists his fate will also depend on the will of his parent club.

“Right now, I’m only thinking about the next games because if we win them, we have some chance of qualifying for the Europa League,” he says. 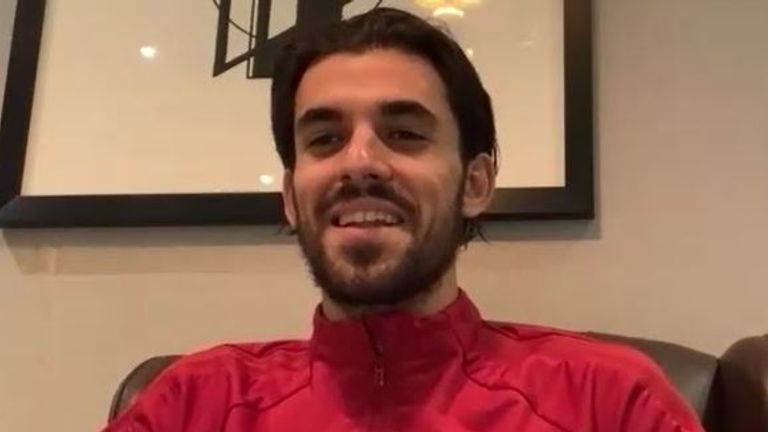 I’m very happy at Arsenal. It’s a club in which I already have a year of experience, so it would be very easy to return. I wouldn’t have to adapt to a new league or new club with a different manager and players

“After that, I have to be calm. I have to return to Real Madrid and they have to make a decision because I have a contract there for the next three years.

“Once I know their decision, I will sit down with my family and the people close to me and see what’s best for me next year.

“But the truth is I’m very happy at Arsenal. It’s a club in which I already have a year of experience, so it would be very easy to return. I wouldn’t have to adapt to a new league or new club with a different manager and players.

“I think it would be a good step for me. But like I said, my future depends on Real Madrid and right now I don’t know their decision.” Ceballos found playing opportunities limited under Zinedine Zidane at the Bernabeu, leaving him frustrated and fearful of stagnating following his arrival from boyhood club Real Betis in 2017. But if he does end up staying at Arsenal, it will owe a lot to his closeness with Arteta.

“I love his way of seeing the game and the things he likes about football,” says Ceballos.

“The míster is very intelligent for such a young coach. It’s like he has spent a whole lifetime in football before this one.

“He knows a lot about various aspects of the game and he works well tactically. It’s also clear that he has spent a lot of time with Pep Guardiola because he has a lot of the same characteristics as him.

“I think he’s a manager who is going to be among the best in the world in the future.”

Another manager might have struggled to convince Ceballos to embrace his new position. He is accustomed to playing a freer role further up the pitch and was used that way by Emery in the first half of this season. But his trust in Arteta is such that he did not even question it. He is in the thick of the action now and his all-round game is improving as a result. “We have also spoken a lot and worked a lot on the defensive aspects of my role, my positioning on the pitch when it’s time to defend.

“I would like to play a bit further forward, of course, but I feel comfortable in this position because I like to touch the ball as much as possible.

“I think I have improved a lot. The truth is that today, I am a much more tactical and technical player than I was before. And whichever position the míster needs me in, I will try to give my best performance.”

It’s not just Arteta who has helped Ceballos settle at Arsenal. In fact nobody has been more important in that respect than Hector Bellerin, a long-time friend and former team-mate in Spain’s youth teams whose support since his move to London has extended to renting him a house he owns near Arsenal’s Hertfordshire training ground. 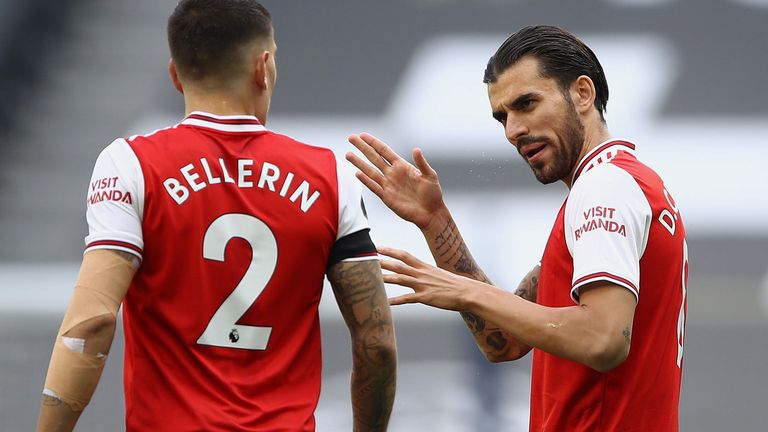 “If you ask me about Hector, I could sit here for hours and hours telling you positive things,” says Ceballos.

“He has made my life a lot easier, not just internally, in the dressing room, but externally as well, in day-to-day life, getting to know the city and different restaurants. He is always accompanying me and making things easy. He has been a fundamental part of my experience here.”

If you ask me about Hector, I could sit here for hours and hours telling you positive things. He has made my life a lot easier

That friendship is another factor which could tempt Ceballos to extend his stay at Arsenal and he certainly comes across as someone who is already invested in their success. He has earned praise from Arteta for the passion with which he celebrates their goals – he was the first player to embrace the manager after the final whistle at Wembley on Saturday – and he is adamant a return to the club’s former glories is not far away.

“With all my respect, I think that right now – and let me see if I can word this in a way that doesn’t anger people – Arsenal is a gigantic club which is sleeping,” he says, “but at any moment it could wake up and make people dream again. It could get back to where it should be, among the top four clubs in the Premier League and even fighting for the title. When it is able to make that step, I’m sure it will be one of the best teams in the world.”

Transfer news: Conor Hourihane joins Swansea on loan from Aston Villa for rest of the season

‘We will always own Charlton’: Battle-hardened fans have put their bodies on the line for the club they love