It’s almost five years since Western Sydney first tried to sign Scott McDonald but their long wait has led to a moment to savour, with the Socceroo scoring on debut to clinch a 3-2 win over Sydney FC on Saturday night.

The Wanderers thought they had snared the former Celtic star in July 2016, only for the transfer to fall at the final hurdle. But after eventually snaring McDonald midweek, the veteran striker showed why he’s been the forward the Wanderers have long sought, scoring against the club’s bitter rivals at Bankwest Stadium to pull Western Sydney out of a rut with a narrow win that also included a late penalty miss by the Sky Blues. 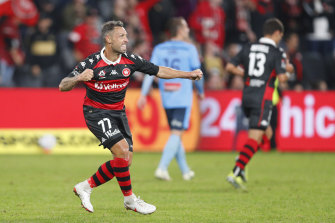 “He’s a terrific player,” Wanderers coach Carl Robinson said. “Bringing him in for the remainder of the season was a no-brainer.”

He needed just seven minutes to open his account in a red and black shirt, coming on as a substitute to head what proved to be the winner in the 74th minute after Bruce Kamau and Mitch Duke had scored earlier for the Wanderers. Six days after Wanderers fans protested a spate of winless games, thousands were still singing long after the final whistle as Western Sydney breathed life back into their season.

It began after just 12 minutes, when Kamau finished a sweeping counter attack, lashing a powerful shot in off the post. Four minutes later, Kamau turned provider. A darting run sparked another counter attack and he found the feet of forward Bernie Ibini. His first time lay-off fell into the path of Duke who doubled the lead with a fierce drive. He celebrated by doing the splits in front of the stunned away fans.

Having looked to be in control only to cop two goals in four minutes, Sydney were shell-shocked. Even the normally composed Milos Ninkovic lost his cool, lashing out at the Wanderers’ Jordan Mutch out of play, sparking the first of a few scuffles as tempers flared.

Whatever Steve Corica said to his players at half-time triggered an immediate response. Ninety seconds after the restart, the Sky Blues clawed one back. Captain Alex Wilkinson rose highest to meet Alex Baumjohann’s corner and head Sydney back into the contest.

After absorbing waves of Sky Blue attacks, the Wanderers sunk all hopes of a comeback. Minutes after coming on for his debut, McDonald made himself an instant hit out west. The dimunitive striker found space inside the box to slam a header into the ground, the ball bouncing into the roof of the net to spark jubilation from the Wanderers’ active supporters just metres away.

However, the Wanderers threw Sydney a lifeline. A foul by Graham Dorrens on Trent Buhagiar gifted the Sky Blues a penalty, which was eventually awarded after nearly three minutes of evaluation by the VAR. Even then, Sydney couldn’t make it count. Bobo skied the spot-kick into the stands.

However, Bobo pounced minutes later. The veteran striker scored amid a goal-mouth scramble to set-up a nervous finish. The tension became palpable late on. Sydney FC came within a centimetre of drawing level deep into injury time when substitute Anthony Caceres rattled the post with a long-range strike.