Wayne Rooney spent most of his illustrious playing career in a Manchester United team who turned smash and grab raids into something of an art form.

But in his first match as Derby County’s full-time manager, he found himself on the receiving end of a late sucker punch.

Jamie Lindsay’s 86th-minute winner for Rotherham in this battle of the Championship basement dwellers only served to underline the scale of Rooney’s challenge in this first touchline assignment. 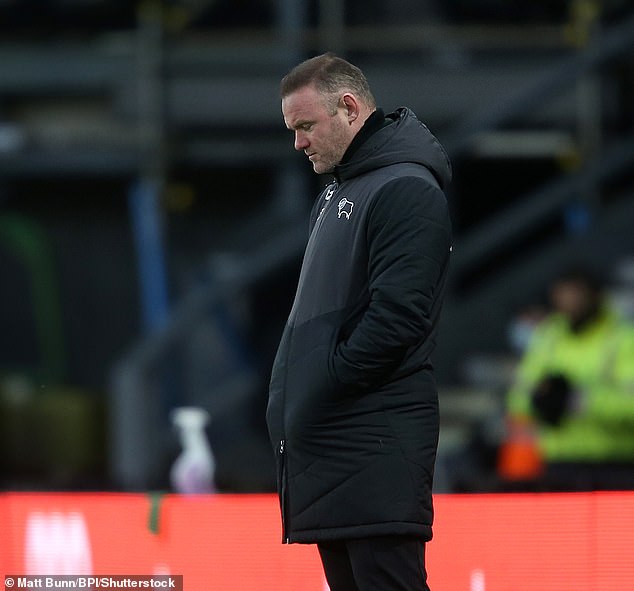 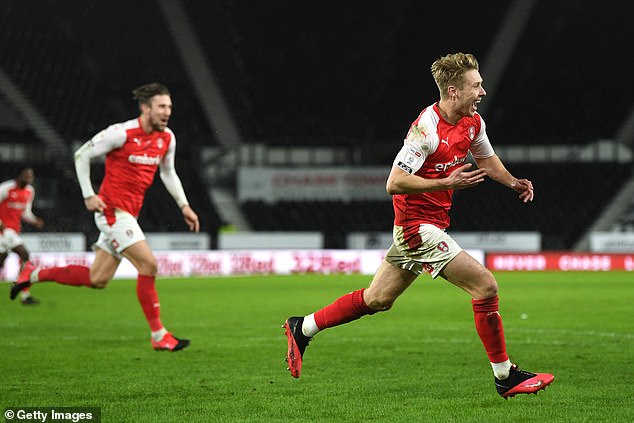 Jamie Lindsay celebrates his goal in the 86th minute, which proved to be the game’s winner 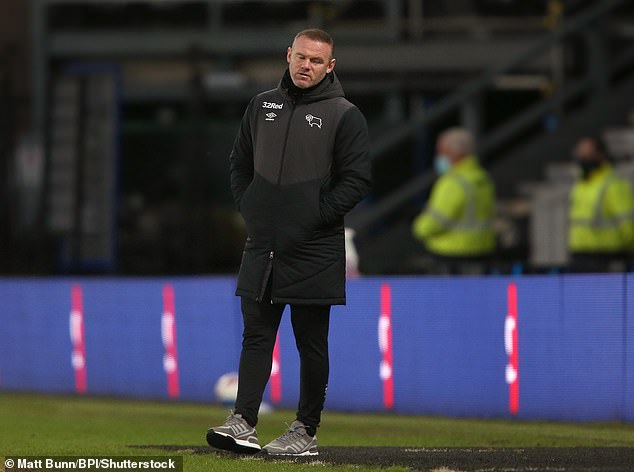 It was a scrappy goal to suit a scrappy game, with Lindsay turning the ball home amid a crowded six-yard box after Derby failed to clear their lines after Daniel Barlaser’s free-kick rattled the inside of the post.

If the nature of the goal was troubling enough for Rooney then that defeat came against a Rotherham side who’d lost their last eight away matches and won just once in 10 may have made the former England captain wonder what he’s got himself in for.

Rooney undoubtedly improved Derby in so many areas during his interim tenure but the brutal reality is that there are plenty of sides far superior to Rotherham in the Championship.

The result leaves Derby in the relegation zone and there is much for Rooney to fix. They enjoyed plenty of possession but created only a handful of clear-cut chances, which they lacked the quality to take. Their inability to score left them vulnerable to precisely what happened. 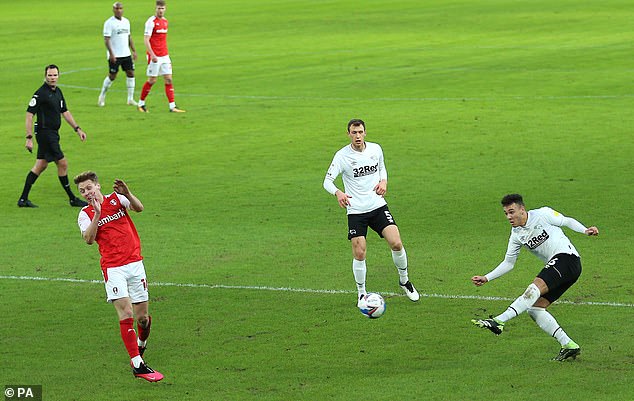 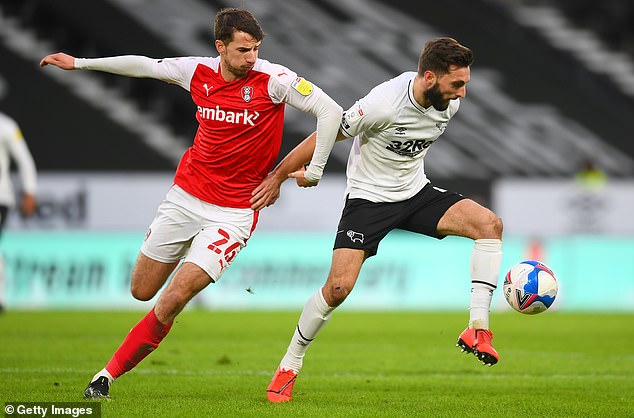 The 35-year-old is a quiet and considered presence on the sidelines but he’ll need to shake things up a bit to banish the spectre of relegation to League One.

One pre-match blessing for Rooney, having agreed that two-and-a-half year contract on Friday, was that his entire first team was available again following the Covid issues that forced Derby to field a youth team in the FA Cup at Chorley last weekend.

A notable decision was to hand the captain’s armband to 19-year-old Republic of Ireland international Jason Knight, a tremendous vote of confidence in a talented young man.

They started with the greater purpose as well, creating the better chances of the opening half if not ever asserting much control for their greater possession.

Most of Derby’s joy pushing forward came down the right, where Nathan Byrne was encouraged to create overloads and then swing inviting crosses into the Rotherham box.

In the ninth minute, one of these deliveries went deep and found Graeme Shinnie, whose crack shot from the left side of the box had to be pushed aside by Millers keeper Jamal Blackman.

A similar build-up and cross created a good opening for left back Lee Buchanan, who aimed for the near post and forced Blackman into another sharp save low down.

But Rotherham are a physical and combative side and caused Derby’s much-improved defence issues from set-pieces.

From one attack, Wes Harding got in behind Byrne, cut into the Derby box and cut back for Michael Smith to turn the ball wide. Ben Wiles also headed a Matthew Olosunde cross over the top. 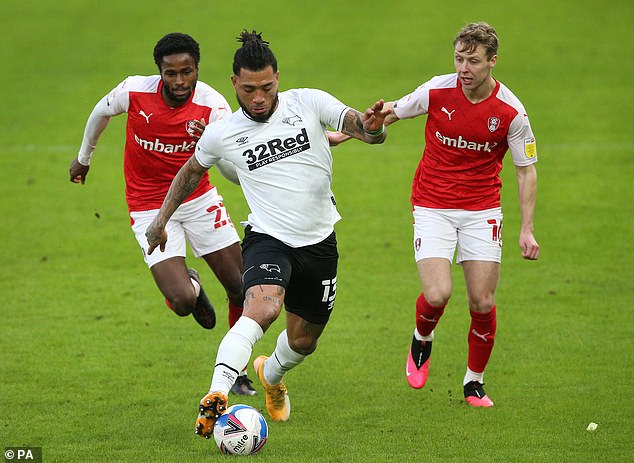 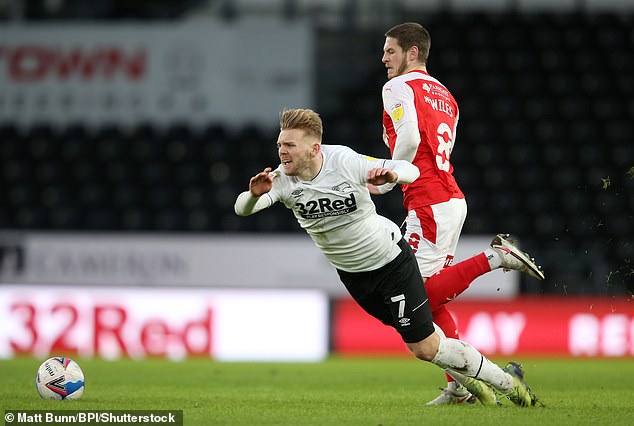 Rotherham also had the ball in the net 10 minutes before the break, a remarkably clinical finish from centre-half Wood. It looked potentially offside but celebrations started as the linesman didn’t raise his flag.

It was then that referee James Linington communicated into his headset that Matt Crooks, who’d flicked the ball through Derby lines into Wood, had been coming back from an offside position.

Assistant overruled, Rotherham were left disappointed and keen to argue the toss at the next break in play.

Derby needed to improve but the early signs weren’t promising in the second-half. When a loose pass rolled out of play, Rooney removed the chewing gum from his mouth, dropped it and volleyed it down the touchline in frustration.

When Byrne was found in acres of space following a cross-field switch, nobody presented for the cut-back and he ran down a blind alley. When Krystian Bielik played Kamil Jozwiak through inside the box, he carelessly handballed. 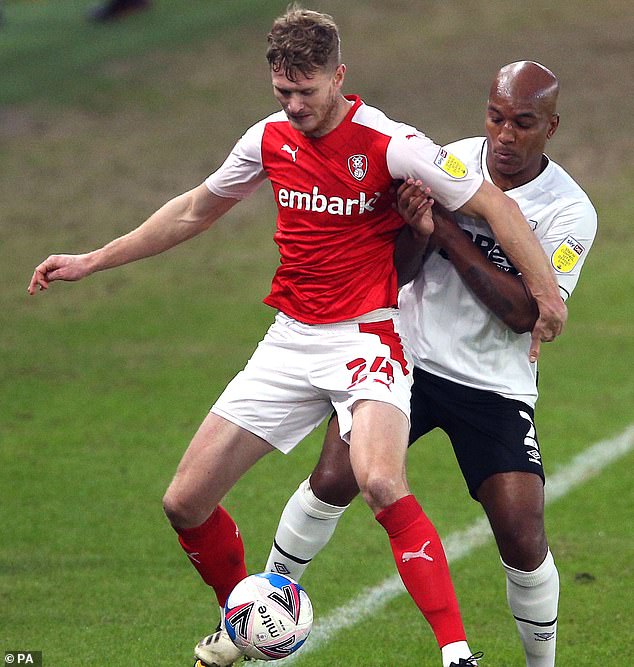 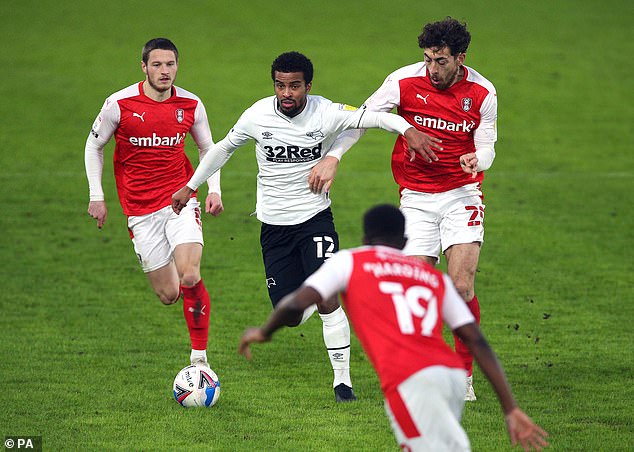 Bielik was then fortunate to escape a second booking for a callous trip on Crooks, a decision that left Paul Warne furious on the touchline. Rooney took Bielik off moments later.

With 20 minutes left, Colin Kazim-Richards held the ball up for Jozwiak inside the box. He weaved into a crossing position and picked out Martyn Waghorn to stun a shot narrowly wide.

Rotherham finished the game strongly and Derby keeper Kelle Roos had to stand tall to block Jamie Lindsay’s point-blank shot after Michael Ihiekwe had nodded a Wiles cross down.

They looked the more likely to grab a winner – and so it proved.

MARTIN SAMUEL: It's ludicrous to stage England vs Iceland in Albania