Gradually and then suddenly. That is the line used to explain bankruptcy in Ernest Hemingway’s novel The Sun Also Rises. But stocks can rise just as quickly, as Dominic Calvert-Lewin is finding out. The Everton striker is the Premier League’s top scorer.

Perhaps Calvert-Lewin would regard another old truism as more appropriate – it takes a lifetime to become an overnight success. It is almost four years since he made his top-flight debut. Over three since he scored England’s winner in the U20 World Cup final.

He is no Jamie Vardy, rising from obscurity. His pedigree has long been clear. But nobody anticipated this. Six goals in four games. Nine in six, if his hat-trick against Burnley in the cup is included. At the age of 23, Calvert-Lewin’s senior England debut now awaits.

In a sense, he is a victim of having made his progress in the spotlight. Witnessing a player’s development can be satisfying but it is fraught with difficulty too. He did not arrive in the competition fully formed. His travails have been played out in front of a global audience.

The temptation is to believe that a player’s output is fixed. To miss the potential for more. But, even before one considers the inevitable peaks and troughs, progress is not linear.

In the case of Calvert-Lewin, that fact is underlined by his failure to find the net in any of his nine appearances after the restart last season. When others were pushing for a replacement to be signed in the summer, Carlo Ancelotti kept faith and has been rewarded.

Just four games into the season, the complexion has changed, and not just because Everton sit top of the Premier League table. Calvert-Lewin’s improvement now feels like part of a trend. One goal in his debut season, four in his second and six in his third. Last season was his best yet with 13 Premier League goals but he already seems certain to better that.

So what has changed? Is this a brief hot streak, a freak run of finishing that will end as quickly as it started? Or is it something more sustainable? Could this new version of Calvert-Lewin be here to stay? Has there been a genuine evolution in his game?

The first thing to note is that the fundamentals were always in place. At a height of 6’2″ with a robust frame, Calvert-Lewin is physical. He is more than capable of leading the line.

Only two forwards have won more aerial duels in the Premier League this season and that statistic cannot be explained away by the small sample size. Watford’s Troy Deeney is the only forward in the competition to win more aerials duels over the past three seasons.

What makes Calvert-Lewin special is that while he relishes this physical battle, his profile is very different to the other players who rely upon these assets. He has pace too.

Calvert-Lewin made more high-intensity sprints than anyone else on the pitch in Everton’s win at Tottenham on the opening weekend, in which he also scored the only goal of the game. He has been Everton’s fastest player in each of the three Premier League games that have followed – being clocked at a top speed of 35.12 kilometres per hour against West Brom.

Speed and strength is a fantastic combination but it has meant that it was not always obvious how best to use Calvert-Lewin during the early part of his Everton career.

Like many young forwards, he was often deployed out wide when first breaking through. As a result, he did not find himself in the penalty box as often as he would have liked. Calvert-Lewin’s heat map shows that he still does a lot of work in that right channel. The difference this season is that he is seeing much more action close to goal too. In fact, his number of touches inside the box per 90 minutes has increased in every single season.

More touches in the box often means more shots and so it goes for Calvert-Lewin. In terms of shot volume per 90 minutes, both inside and outside the area, his progress has actually been fairly predictable. A steady increase year on year culminating in this stunning form.

Gradually and then suddenly.

The location of the shots that Calvert-Lewin has been taking reveals even more about his rise in output and helps to explain why Everton’s improvement has been so important too.

Even when used as a striker under Marco Silva, the concern with Calvert-Lewin was that he was not on the end of quality chances. His shot location map shows that while the vast majority of his efforts came from inside the penalty box, these were not easy opportunities. Many were contested headers from a zone where it was difficult to beat the goalkeeper. 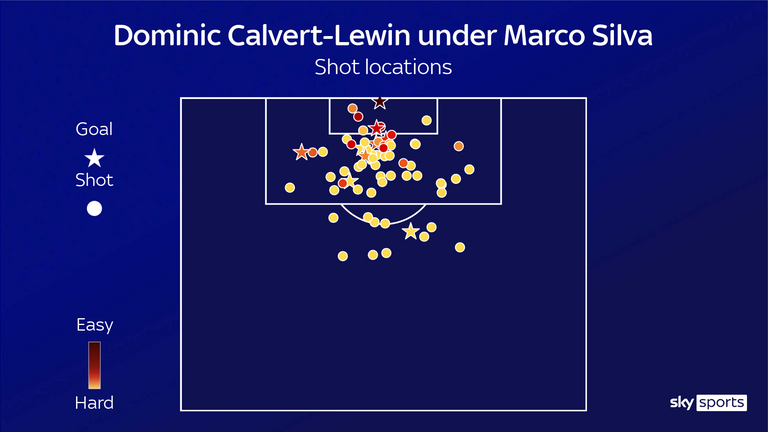 Three of Calvert-Lewin’s six Premier League goals this season have also been headers – two of them directly from set pieces and the other following a quickly-taken corner. But it is the other three that provide a greater insight as to why the goals are now flowing.

All have been first-time finishes from close range.

The second of his three goals against West Brom came following a delightful lofted pass over the top by James Rodriguez to feed Richarlison whose square ball needed only to be forced over the line. The opener against Crystal Palace was similar. Rodriguez breaking the lines with a right-footed pass this time before Seamus Coleman put the ball across.

Greater creativity under Ancelotti, particularly since the arrival of a certain Colombian, has brought much better service – and Calvert-Lewin has been on the spot to take advantage. 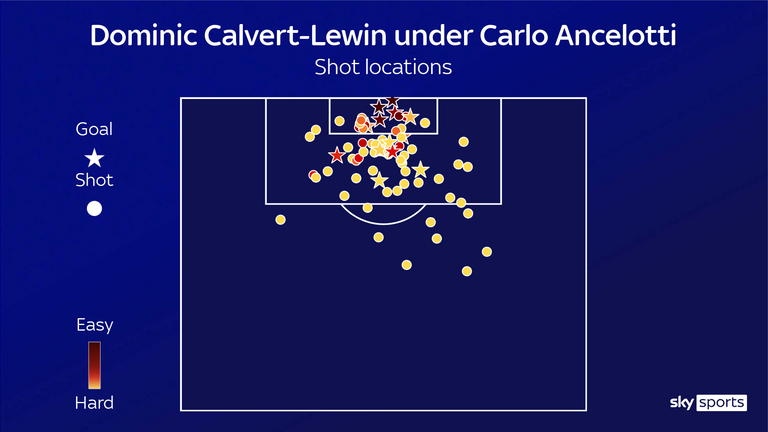 Calvert-Lewin’s shot location map since Ancelotti was appointed just before Christmas highlights this dramatic change in the sort of chances that are now coming his way.

There is no great difference in the opportunities outside of the penalty box or even outside the six-yard box. The big change has been closer to goal. He has become a poacher now, with Ancelotti even comparing him to notorious penalty-box predator Pippo Inzaghi.

“Where he has improved more is there, in the box,” said the Italian.

“I am evolving as a centre-forward and I am honing my craft. Beforehand, I was guilty of doing a lot of my best work away from the goal. Now I am focusing on getting between the sticks and putting the ball in the back of the net.”

That is reflected too in the increase in shot quality as well as shot volume. The types of chances that the forward is now having have changed as well as the number of them.

The expected-goals data shows that the average Calvert-Lewin shot in each of the two Premier League seasons prior to last year had around a one-in-nine chance of being a goal.

The average Calvert-Lewin shot so far this season, based on its location and type of shot, has had around a one-in-four chance of resulting in a goal. With opportunities of such quality, it does not require great finishing. Being there to put the ball in is enough.

Of course, that is the skill that Calvert-Lewin has learned. He remains a willing runner. He can still contest the aerial duels. But he has also developed into an expert goal poacher.

How sustainable is his current form? Nobody is expecting him to continue scoring six in four – or even the expected-goal rate of one every 90 minutes that he is at so far this season.

But Calvert-Lewin’s underlying numbers for the last campaign already had him scoring a goal every other 90 minutes – putting him close to the 20-goals-per-season mark if he stays fit -and that was before the summer signings made Everton a more creative outfit.

Gradually and then suddenly.