Rangers’ minute’s silence to commemorate the life of Queen Elizabeth II was disrupted by Dundee United fans in their Scottish Premiership encounter. Away supporters could be heard booing the tribute while chants of “Lizzie’s in a box” were also audible.

All matches across the United Kingdom today have included a pre-match tribute to commemorate the passing of Her Majesty The Queen, with teams encouraged to take part in a minutes silence before playing the national anthem. It was the first time clubs have had the opportunity to come together and mark her death with all of last weekend’s fixtures cancelled as a mark of respect.

The reports from Ibrox will be exactly what the football authorities were hoping to avoid, with reports last week suggesting there had been concerns that a minority of supporters would not behave themselves appropriately, something that has now been proven with today’s issues.

United supporters could be heard chanting ‘Lizzie’s in a box’ for the duration of the silence period while others took to booing. Their actions prompted an angry response from the home support with many fans heard shouting at their opposition the second the silence finished. 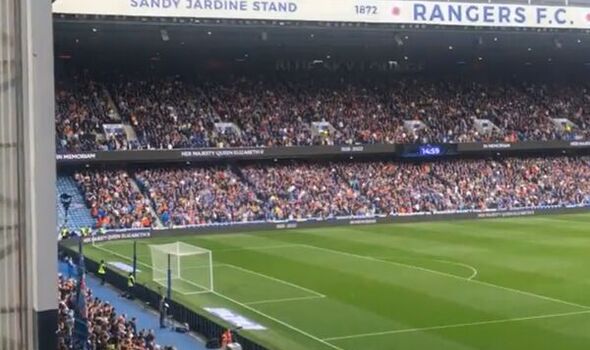 It was not the first time moments of silence had been disrupted in football matches, with some supporters disrespecting the tributes during European matches last week. The minute had to be cut short at Tynecastle with a minority of Hearts’ fans booing throughout the stoppage, with some shouts of “f*** the Queen” also heard. Meanwhile, Shamrock Rovers supporters also chanted “Lizzie’s in a box” during their Conference League draw with Djurgarden.

Rangers did have an opportunity to pay tribute to the monarch during their midweek Champions League defeat against Napoli with the club receiving wide praise for the quality of their demonstration. The minute’s silence was impeccably observed while supporters also displayed a huge tifo display for the late Queen.