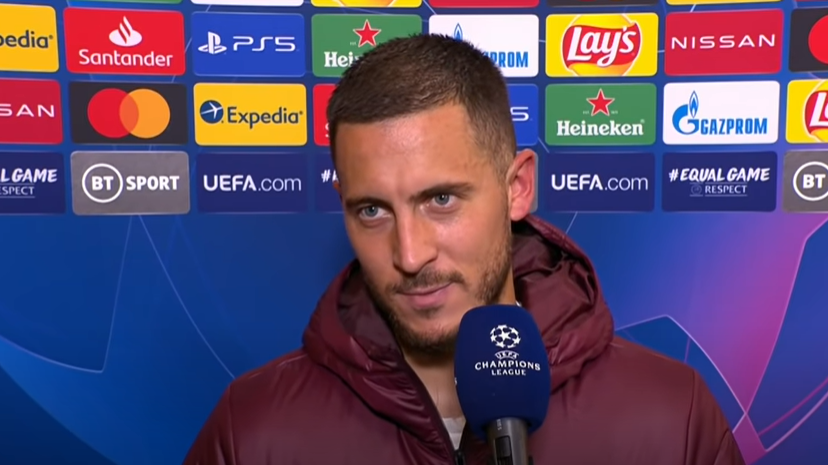 Eden Hazard admits ‘it could be better and it could be worse’ for Real Madrid after they drew 1-1 with his former club Chelsea in the first leg of their Champions League semi-final.

Thomas Tuchel’s Chelsea produced an impressive performance to secure a well-deserved draw and a potentially crucial away goal in Madrid on Tuesday evening.

Real Madrid striker Karim Benzema cancelled out Christian Pulisic’s opener but Chelsea were the better team on the night as they bid to reach the Champions League final, where they would meet either Manchester City or Paris Saint-Germain.

Hazard, who won three Premier League titles with Chelsea before joining Real Madrid in 2019, came on as a 66th-minute substitute for the hosts, replacing Vinicius Junior.

Speaking after the 1-1 draw, he told DAZN: ‘It could be worse, it could be better. We have a second leg to play so we have to go there and try to win the game.

‘It’s always good to play against friends. I have a couple of friends over there but now I’m a Real Madrid player.

Hazard has endured a miserable time with injuries since arriving at the Bernabeu – missing 58 matches in total – and says he will take his rehabilitation ‘step-by-step’.

‘Of course I want to play and be on the pitch but I need to take it step-by-step,’ the Belgian star added.

‘In the last game [against Real Betis] I played 15 minutes, today I played a bit more. We have a couple of good games to play until the end of the season, I just want to be ready for them.

‘I feel in better condition, my body’s better, so I’m just happy I can play again.’

Tuchel was impressed by his team’s performance in the first-leg clash but insists Chelsea will need to ‘fight for every centimetre’ when they host the return leg in eight days’ time.

‘Even if we had won here, everything is possible,’ said Tuchel, who replaced Frank Lampard as Blues boss in January.

‘It’s half-time and we’ll have to fight for every centimetre and every advantage that we want to have and we need to fight and deserve it.