FA chief executive Mark Bullingham revealed last week that the organisation have already decided they want to extend Southgate’s tenure until 2024 – a two-year extension to his current deal leading up to the Qatar 2022 event.

Southgate says he is flattered that the FA are prepared to show him such whole-hearted support while the current tournament is still ongoing when asked by reporters.

But he maintains that the appetite of the nation as a whole for him to continue in the role will be the decisive factor as he does not want to be England manager in an environment where the supporters are not behind him.

“It was very nice to hear that from the organisation, the chief exec, and I feel the full support,” Southgate told ITV.

“I think if he’d been asked that question and he’d said otherwise then there would be headlines all week! 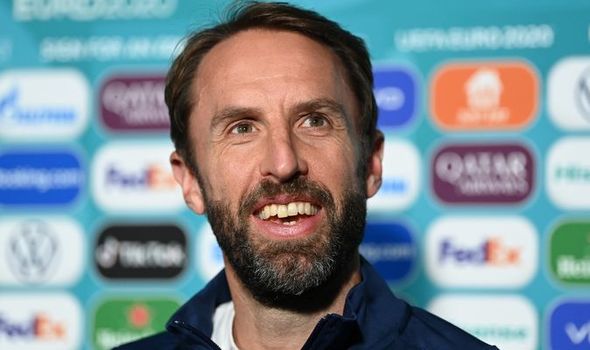 “It’s great, from my perspective, to have full support internally, I think any manager would want that.

“Let’s see how things play out and then see where everybody is with it.”

Meanwhile, ghosts of the past will continue to haunt the England boss, even if he conjures England’s greatest ever European Championship knockout win against Germany tonight.

Stuart Pearce dragging him back to the centre-circle, telling him, “Come on, we’re all in this together!”

Tony Adams dragging him forcefully with the rest of the England players on a lap of honour around Wembley.

Terry Venables telling him, “You’ve been brilliant!” before quoting Friedrich Nietzsche to him: “What doesn’t kill you makes you stronger!”

Sure enough, Southgate has become strong.

“At that second, everything seemed crystal clear,” he wrote in his 2003 autobiography, Woody and Nord.

“I was the person who had ended a nation’s dream. England’s loss was down to me.

“Straight away I knew this would be a major issue for the rest of my life.

“It would stay with me, it would be what people remembered me by and I had to accept it.”

But now he has a chance to heal the nation’s long-standing frustration at not winning a major football tournament if not his own regrets.

The moment Germany emerged as England’s opponents on Wednesday night, Southgate had ordered up all three group games in full and spent until the early hours watching them in between sporadic sleep.

There was no time for nightmares of the past.

For all the excitement of England’s progression to the semi-finals of the World Cup in 2018, somehow a redemptive clash with Germany needs to be part of the picture of Southgate is to get his Hollywood ending.

Perhaps this is the game England and Southgate both need if they are ever to unlock all those years of hurt.

The sub-plot of this vicious pandemic robbing him of two key players – Ben Chilwell and Mason Mount in particular – has added to the narrative.

But Southgate is determined to stay in the now as he prepares to face a side which have a rich pedigree but a questionable recent form.

“These sorts of landmarks are always opportunities,” he insisted.

“They have got an opportunity to go beyond where some incredible players and fantastic servants of England have gone before.

“And that is always an opportunity to be grasped.

“Every time you play for England you have an opportunity to score a goal or create a moment that lives with people forever.

“That is to be cherished, really. That is what presents itself here.”

But Southgate is adamant that tonight’s game at Wembley is about the players of today, not the failures of yesterday.

“It will be the players who win it. It’s important the focus is on them. The opportunity is theirs.

“All those barriers are there to be knocked down in life and that’s the mentality we have got to have.”

Mason Mount and Ben Chilwell arrived back with the squad in the early hours.

Southgate will have to make a final call on the fitness – mental and physical – of the first in particular.

A back three or back four? Who alongside Harry Kane to unlock a German defence that looks uncharacteristically vulnerable.

These are tougher calls, but ones Southgate hope he will finally get correct.

Souness says Pereira's red card for kicking out was soft