We’re coming, Rome! England stars jet off to Italy on eve of huge Euro 2020 quarter-final clash against Ukraine, with Gareth Southgate’s Three Lions looking to repeat side of ’96 by reaching the Wembley semis

England have jetted off for Rome ahead of their huge Euro 2020 quarter-final clash with Ukraine as Gareth Southgate’s side look to build on the momentum gained from their phenomenal win over Germany.

Second-half goals from Raheem Sterling and Harry Kane booked England’s place in the last eight of the tournament after a stunning win over old rivals Germany at Wembley Stadium on Tuesday.

Southgate’s side, who have yet to concede a goal over four games so far, are now three wins away from winning their first major trophy since 1966.

The Three Lions have played all of their games at Wembley thus far but must travel to Italy to face Andriy Shevchenko’s Ukraine, with a win sealing a return to the national stadium for the semi-final against either Denmark or the Czech Republic.

And Southgate’s 26-man party looked relaxed as they flew out to the Italian capital on Friday afternoon, on the eve of their game against the World No 24-ranked side. 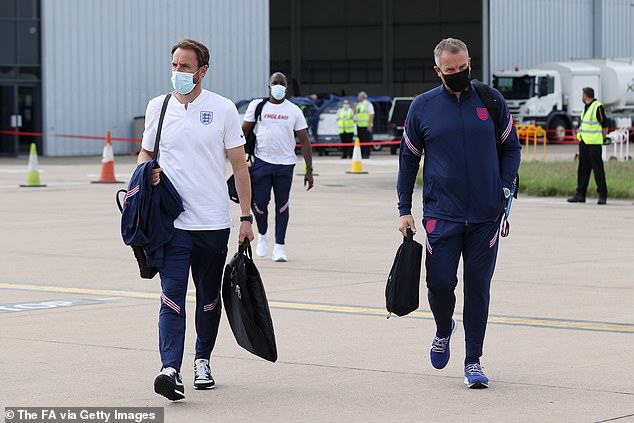 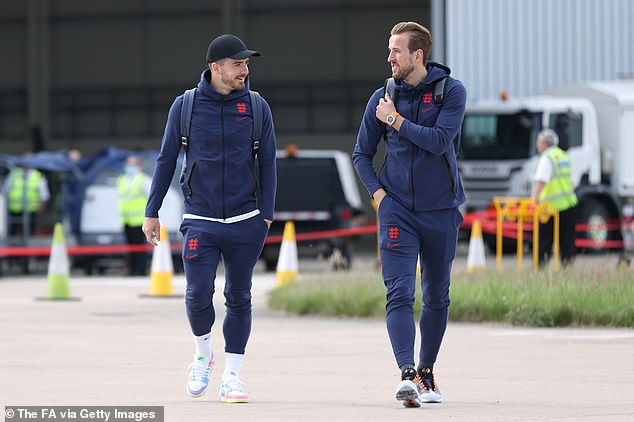 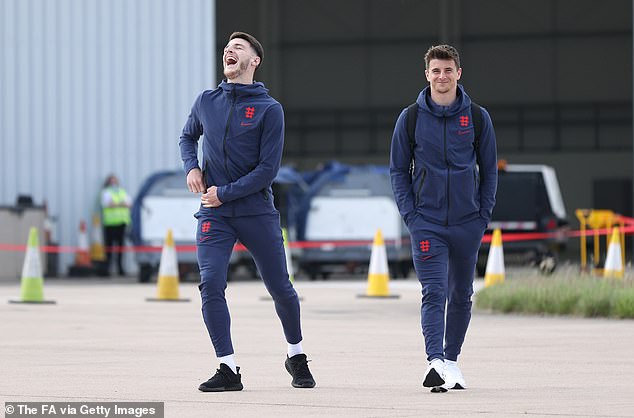 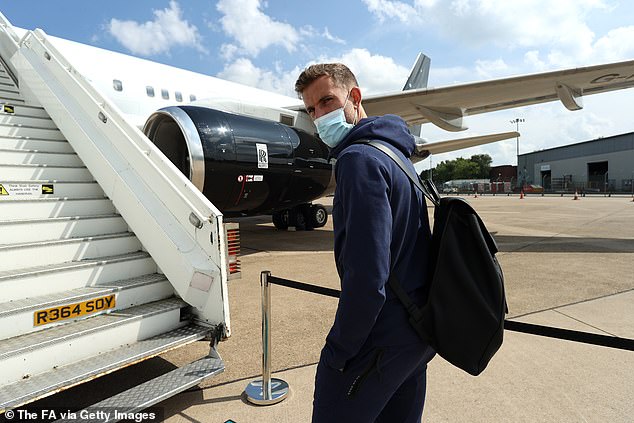 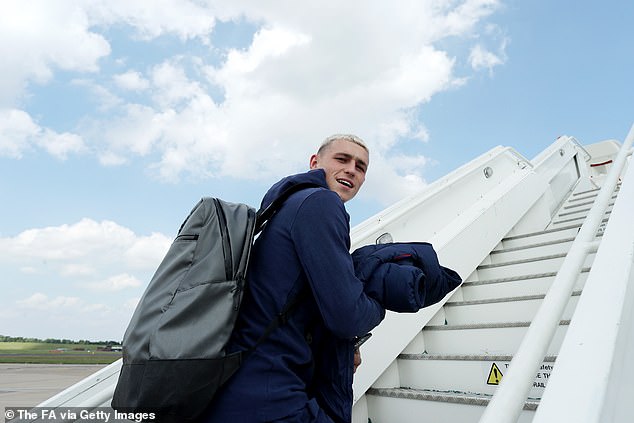 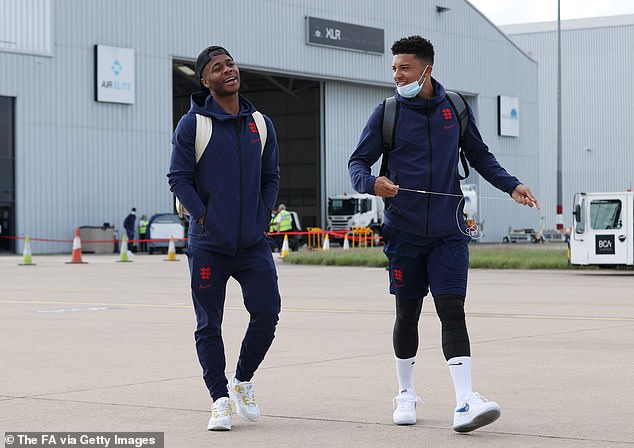 Captain Kane was pictured walking with Aston Villa star Jack Grealish towards the plane, while Declan Rice was seen laughing as he strode along the runway with close friend Mason Mount.

Sterling was photographed boarding the plane with Jadon Sancho. England’s top scorer at this summer’s Euros will come up against the youngster in the Premier League after Sancho agreed to join Manchester United earlier this week in a £73million deal from Borussia Dortmund.

Phil Foden, sporting his new blond look, was photographed scaling the stairs to board the plane. The Man City star will need to be cautious if he plays this weekend as he is one booking away from missing the semi-final.

Liverpool captain Jordan Henderson, who has seen limited minutes at this summer’s tournament thus far, wore a face mask as he boarded the plane. 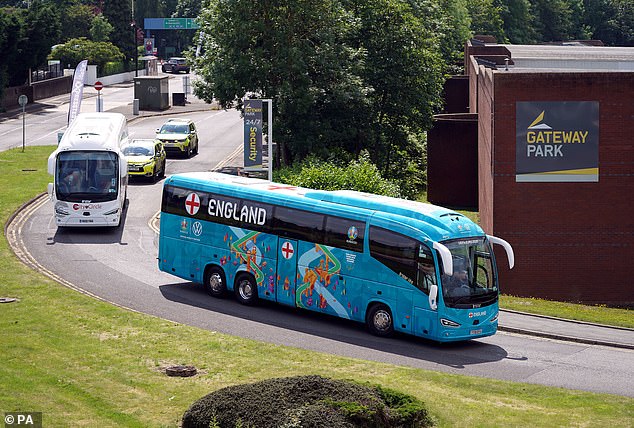 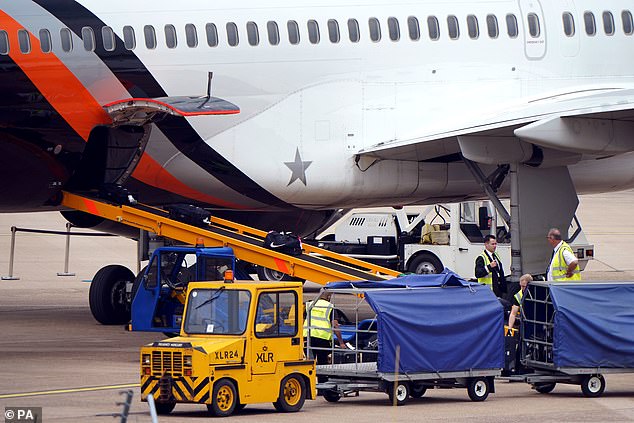 ‘This is now a fantastic challenge for us,’ the Three Lions boss told the Official England Podcast.

‘We’ve got to go away from Wembley, into a potentially quite hot climate, hardly any England fans in the stadium, and maybe a not particularly full crowd full stop.

‘The players knew, individually, so many of the German players and their direct attributes, [with Ukraine] we are having to learn a lot more quickly. 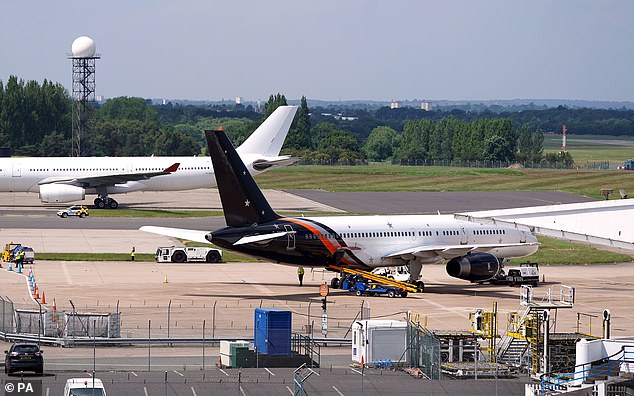 With the luggage loaded, the plane can prepare for the start of its journey from Birmingham 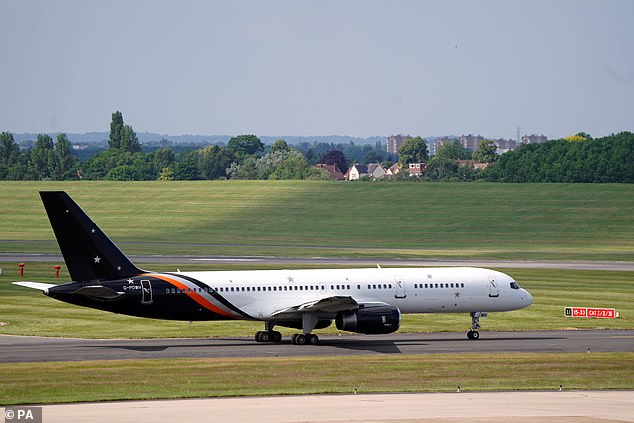 ‘We have watched Ukraine over the last year or so but of course not many of them are playing in the Bundesliga or the English Premier League. There’s obviously a couple who are.

‘And then there is this perception that all we’ve got to do is turn up, and we are on our way. We’re very clear now that the total focus is on Saturday.

‘We have to prepare the game in the right way, and our mentality is critical.’

Before their flight, the entire playing squad took part in the session in Burton-upon-Trent, where spirits were high ahead of their quarter-final tie. 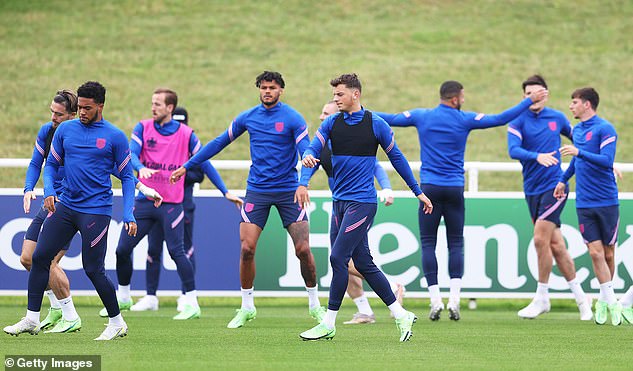 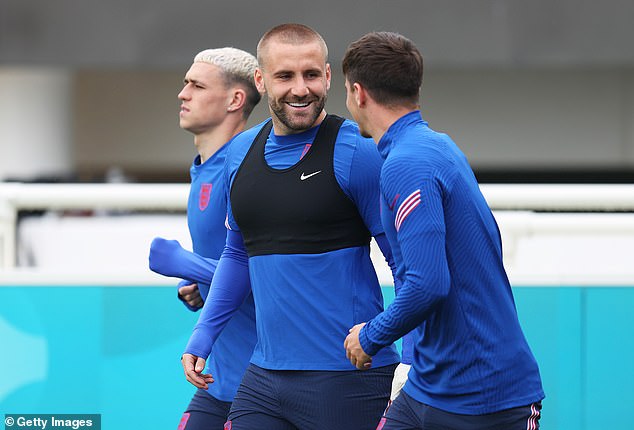 Phil Foden, Luke Shaw and Mason Mount (left-right) share a joke during the session on Friday

If they come through Saturday’s test in Rome, England will face either Denmark or Switzerland at Wembley next Wednesday, before Sunday’s final in the same stadium.

Despite the good mood in the England camp, Southgate does have plenty to consider going into tomorrow night’s game, with four of his players at risk of missing the semi-final if they pick up a yellow card.

Maguire, Declan Rice, Phil Foden and Kalvin Phillips all run the risk of a ban if they are booked against Ukraine and England get through, before all bookings are wiped ahead of the last four.

Trippier, meanwhile, has been nursing a muscular injury but did train with the squad on Friday, hinting that he will be fit to feature on Saturday night.