England react to their defeat

Toothless England Under-21s are on the brink of another early exit at the European Championship after a limp 2-0 defeat to Portugal.

England had already lost 1-0 to Switzerland and another defeat in Ljubljana pushed them further towards elimination at Euro 2021.

The Young Lions are not out of the tournament yet but if Switzerland get a point or more against Portugal on Wednesday they will fail to reach the knock-out phase in May and June regardless of what they do against Croatia.

Defeat also casts further doubt over the future of boss Aidy Boothroyd, who is out of contract in the summer.

Croatia’s 3-2 win over Switzerland had given England a pre-game boost and they knew victory would leave Group D wide open ahead of the final games on Wednesday.

But the Young Lions failed to have a shot on target in another anonymous attacking display.

Diogo Dalot’s half volley flew over in the 15th minute, but while England began to see more of the ball they again lacked momentum to trouble their opponents.

From the corner, Ramsdale palmed Pote’s low drive straight to Florentino but the midfielder could not adjust his feet in time and sliced wide. 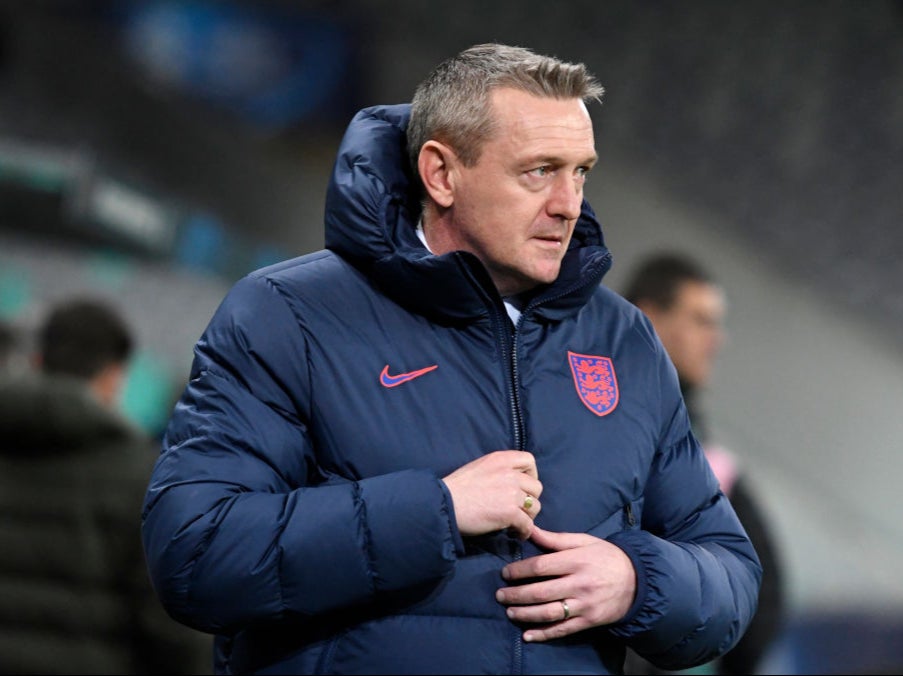 Aidy Boothroyd’s position is under threat

Boothroyd had called England’s 1-0 defeat to Switzerland irritating after they flopped going forward and the manager would have been just as irked following another shot-shy half.

Ebere Eze replaced the ineffective Emile Smith Rowe at the break but the Crystal Palace midfielder was unable to turn the tide.

Vieira drove over and Vitinha curled wide from the edge of the area as Portugal continued to threaten – and it was no surprise when Mota opened the scoring in the 64th minute.

England were opened up as Pote broke to find Mota and he brilliantly curled in off the post from 15 yards.

Ten minutes later Portugal wrapped the game up when Marc Guehi fouled Goncalo Ramos in the box and Barcelona’s Trincao sent Ramsdale the wrong way from the spot.