Borussia Dortmund have already made it clear in a meeting with Mino Raiola that they do not want to sell Erling Haaland this summer – at any cost but the Bundesliga club now have a major fight on their hands when it comes to keeping the Norwegian, following today’s meetings between the player’s representatives, Barcelona and Real Madrid.

Both Alf-Inge Haaland and Raiola flew out to Catalonia to sit down with Barcelona, which inadvertently confirmed that the auction has officially commenced.

The saga then took another twist when it emerged the duo were heading straight to the Spanish capital to meet with Real Madrid.

Raiola himself said earlier this month that his client will stay put at Dortmund until next season but things are quickly changing with every day that goes by.

“He has to continue to grow. He will stay in Dortmund for as long as is necessary,” Raiola told Marca. 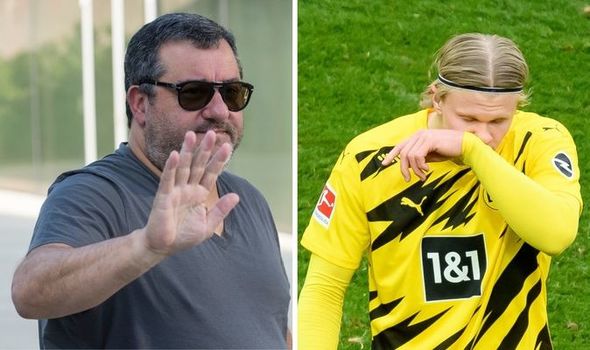 Yet crucially, Dortmund’s top-four hopes in the Bundesliga have started to fade and that could ultimately prove key.

Haaland loves the Champions League and recently became the youngest-ever player to reach 20 goals in the competition.

Failure to qualify next season could force his hand and push Haaland closer to the exit door just 18 months after joining Dortmund from RB Salzburg.

Yesterday, Raiola met with Dortmund to discuss the forward’s future and sporting director Michael Zorc has since said: “Yesterday I spoke to Mino Raiola. We’ve made our intentions very clear.”

Less than 24 hours after that conversation, Raiola was snapped arriving in Barcelona for talks over a deal that goes against Dortmund’s wish to keep their talisman.

Zorc remains relaxed though, later telling SPORT1: “No problem when Alfie and Mino want to take a sunbathe on the Mediterranean Sea. I am relaxed because I know what we want.”

As Haaland’s agent, Raiola does have the right to explore all avenues for his superstar, particularly given that Dortmund may not be playing Champions League football next season.

However, it only emphasises just how difficult it will be for Dortmund to keep the player this summer.

A host of European giants are already queuing up and beginning to explore the finances involved in a blockbuster deal.

Before his move to Dortmund, Haaland’s entourage also boarded a similar carousel as they explored four potential destinations.

Haaland flew to Leipzig to speak with Julian Nagelsmann and look around the club’s training centre.

The same happened with Dortmund, who he would later choose as his next destination following consolation at the end of 2019. 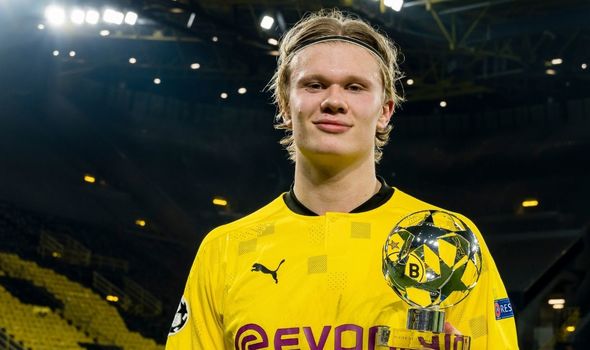 Juventus were also in the running, while Ole Gunnar Solskjaer even flew to Austria in a bid to convince his former player to join Manchester United.

Raiola has now set the tone for a frenzy with the surprising nature of his Barcelona and Real Madrid meetings, during a time when international travel is also restricted.

If he was serious about Haaland staying at Dortmund, he would not have gone to the extra lengths of setting up the meeting with the two clubs and instead could have adopted a patient approach to proceedings.

Similar discussions are now likely to take place in the coming months with the likes of Manchester City, United and Chelsea. The ploy is expected to spark others into life given that nobody wants to miss out on the generational talent.

And if Dortmund are still convinced and naive enough to believe Haaland is going nowhere, they are about to embark on the longest transfer window of all time…