England embraced the huge occasion, they now know the art of game management, but Italy can unnerve them by pressing – FIVE THINGS we learned from Three Lions’ Euro 2020 semi-final victory

By the end, few people will have cared how England got it done. On a historic night at Wembley, with the most rapturous atmosphere seen since the stadium was rebuilt, they got over the line and into the final.

But there was method behind the madness. They had to come back from a goal down for the first time and withstand their first major tactical challenge. 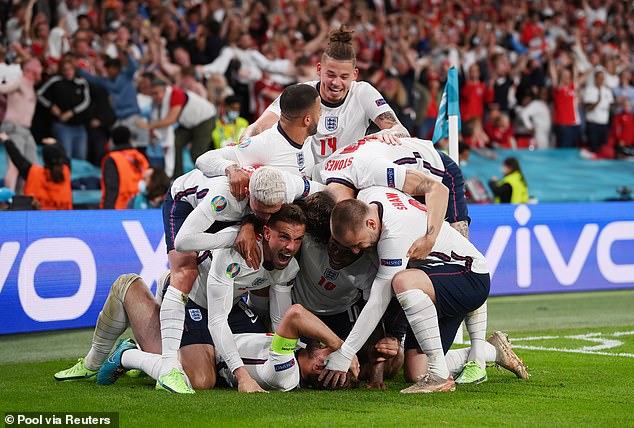 The semi-final has been a step too far for England since 1966. And though Russia 2018 was a blast, in the aftermath there was a sense of failure.

With a World Cup final in sight, England retreated into their shell, lost control of the game against Croatia and Southgate couldn’t do anything to stem the tide.

That seemed to be his major failing; was he really a coach to affect the big games under pressure? As 65,000 roared ‘Southgate you’re the one!’ at Wembley, we had our answer.

He and assistant Steve Holland had vowed to learn from Russia and there was no repeat. Denmark posed many questions, especially in the first half, but as their intensity waned, England grew into the game.

Against Croatia in 2018, they had faded away. Here they never lost sight of their game plan, kept pushing onto the front foot and were dominating by the end of normal time.

And they had a plan for all eventualities. Hence hooking golden boy Jack Grealish to go to a back three in the final 15 minutes. That never looked likely to be breached.

Whereas in Russia, they looked suffocated by the enormity of the occasion, here they embraced it. 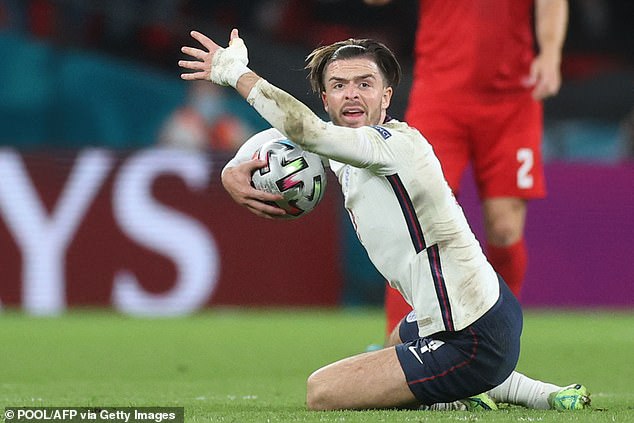 Despite having brought on Jack Grealish (above) as a substitute at 1-1, Southgate was not afraid to take off the playmaker to help England see out the game after taking the lead

The art of game management

Leaving aside the dubious penalty, about which there will be endless debate, Southgate’s team should be commended for the lessons they have learnt.

They managed the game out beautifully at 2-1. Denmark were shattered by then but they were limited to two corners and the Martin Braithwaite shot from outside the box.

Where once England might have endured a tense last five minutes, here they simply kept the ball between 116 minutes and 119 minutes, a sequence which even included a chipped ball from goalkeeper Jordan Pickford to left back Luke Shaw. Even our goalkeepers can play now.

England’s ability to play out of tight spaces from the back is the line in the sand that marks this team’s era from the past. It affords the team multiple attacking options.

No-one can scoff at English technique now. In Euro 2012, when England beat Sweden 3-2, both sides were so technically poor in the last five minutes that the ball whizzed around like a pinball machine, as it bounced from side to side. England needed possession to kill the game, Sweden to stay in it. Neither were capable of keeping the ball.

This though was majestic and it drained the life out of Denmark. An Italian paper once wrote; ‘No football please, we’re British’ about a dreadful England-Republic of Ireland game in 1990 (ignoring 70 plus year of Irish republican struggle, but still). They won’t be saying that on Sunday. 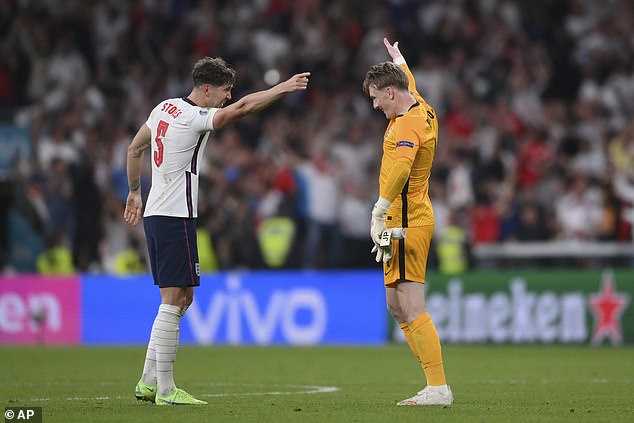 Italy though will take note. The sheer intensity of Denmark caused England multiple problems in the first half.

Two issues seems to afflict England. They didn’t get to grips with Denmark’s 3-4-3. Unlike against Germany, where they matched up the wing backs, here they went 4-3-3 and seemed almost cavalier in allowing Joakhim Maehle and Jens Stryger space.

England’s full backs and wingers pretty much ignored them out wide until they got the ball, when they would then close them down. But they were creating plenty of width for Denmark.

There might have been a plan to allow them the ball. But it look alarmingly like England were bamboozled by the shape.

As worrying was England’s inability to make their midfield superiority pay: Thomas Delaney and Pierre-Emile Hojberg were so quick at moving the ball into Mikkel Damsgaard Kasper Dolberg and Martin Braithwaite, that Harry Maguire and John Stones were frequently on the back foot.

England haven’t played a side that harried them nor a team that attempted to play through them quickly. Even though Denmark played largely on the counter, they got in England’s faces and pressed high up the pitch when necessary, like a 2016 Leicester side. It unsettled England. And Roberto Mancini will like the look of that. 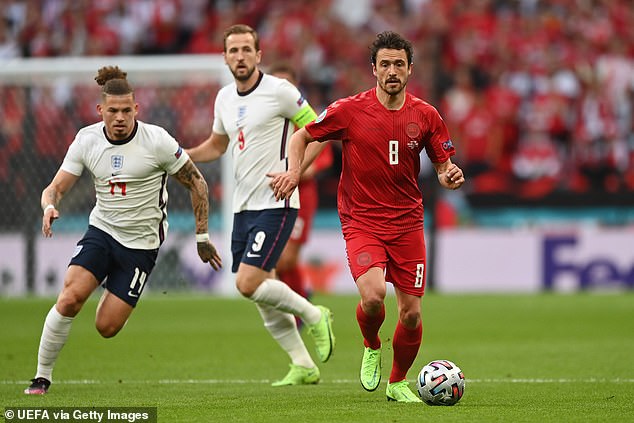 England though did look susceptible to the press, and were troubled by the effective direct passing from the likes of Thomas Delaney (right) as a result

Finally! A goal direct from a free kick. But not from England, the former set piece kings. Damsgaard’s strike was delightfully executed. It will concern England how cheaply they gave away a free kick in such a dangerous area when defending an initial free kick, from a much deeper position.

Hard to take anything away from Damsgaard though; the technique to get it over the wall and back down again was superb, especially with Harry Kane and Harry Maguire jumping high. Pickford got a finger to it. Maybe if he’d gone with his left hand he might have had a stronger touch but, given how well the wall jumped, he would have expected that side to be covered. 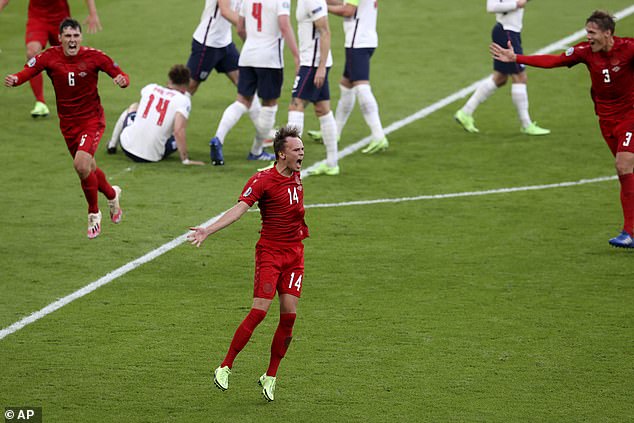 That said, England’s quick combinations out wide bedevilled Denmark. The signs were all there before the Simon Kjaer own goal. Bukayo Saka played in Kane who drove hard to the line, crossed and in reality Sterling should have finished, shooting straight at Kasper Schmeichel.

Two minutes later, Kane fed Saka, racing away to the line, and this time the cross forced the own goal, with Sterling waiting. And, penalty or not, it was Sterling’s drive into box that forced the situation. No side will want to face Saka, Sterling – or Sancho and Grealish – dancing in from the touch line. Kyle Walker and Luke Shaw supported superbly. This is clearly England’s area of strength and will concern Italy. 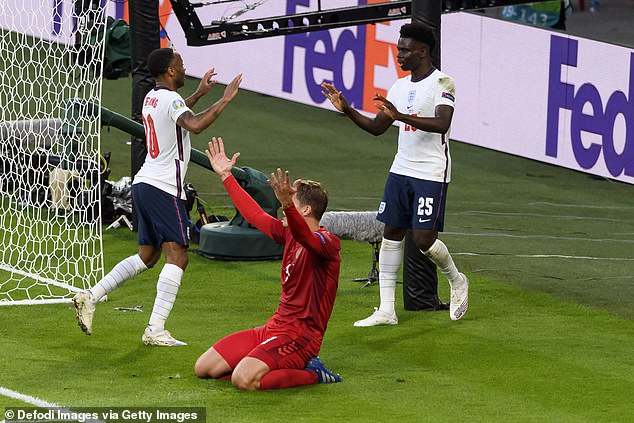 Disgraced footballer jailed for having sex with 14-year-old girl