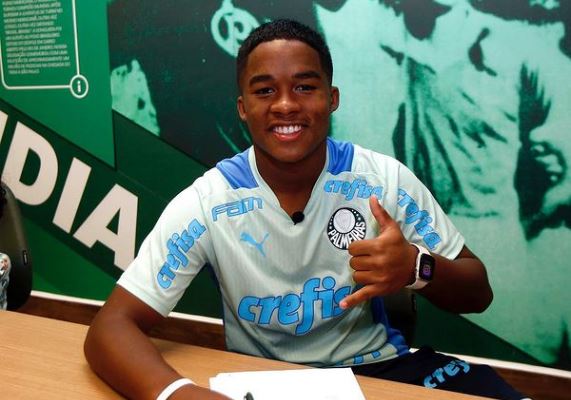 Manchester United, Liverpool, Arsenal and Chelsea are set to battle some of the biggest clubs in Europe to sign €60m (£50.7m) Brazil wonderkid Endrick.

Real Madrid, Barcelona and Paris-Saint Germain are all looking to secure the signature of 16-year-old striker Endrick, who plays for Palmeiras in Brazil.

Endrick has a €60m (£50.7m) release clause in his contract, meaning one of the Premier League’s elite clubs may be willing to swoop in to avoid him ending up in Spain or France.

The left-footed forward joined Palmeiras’ youth team at the age of 11 and has been described as the future of Brazilian football, drawing comparisons to legends Ronaldo and Romario.

Endrick, who sees Cristiano Ronaldo as his idol, caught the attention of clubs in Europe during the 2022 Copa Sao Paulo de Futebol Junior – a cup competition involving Brazilian U20 club teams – where he scored seven goals in seven games.

He was voted Player of the Tournament after helping Palmeiras U20s win the title and has also scored five goals in four games for Brazil U16s, winning the Montaigu Tournament in 2022.

‘Really everyone, from the top English clubs to PSG but also Real Madrid and Barcelona, who have very strong scouting in South America.

‘If you think about the top ten clubs in Europe, everyone has explored Endrick’s situation because he is considered a top player of the future.

‘The price is €60m – the new release clause in his contract; but to decide the next club it will take many months. It is a long process and the player’s agents as well as his father Douglas want to choose the right project.’

Endrick decided to pursue a career as a footballer to help support his family. His father, who was unemployed, was handed a job as a cleaner by Palmeiras.