Police were called to the address in Blundellsands, Crosby, just after 6.30pm on Friday after the 61-year-old football boss’s stepdaughter, Chloe, disturbed two men searching the property. Mr Ancelotti was not there at the time but a number of people were inside, although no one was hurt, according to a source. The raiders then ran from the house with a safe.

A Merseyside Police spokesman said: “We are appealing for information after a safe was stolen in a burglary in Crosby on Friday.

“The offenders were described as wearing black waterproof clothing, possibly with white writing on, and black balaclavas.

“The property will be forensically examined and CCTV opportunities are being explored.”

There have been a string of raids on the homes of Premier League footballers in recent years, with criminals believed to scour social media and strike when they know they are away on fixtures. 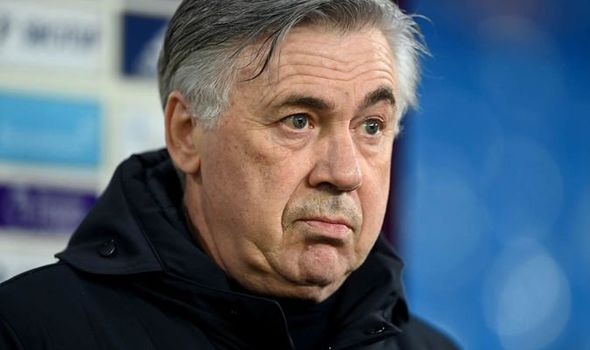 In July, the home of Liverpool midfielder Fábio Henrique Tavares, known as Fabinho, was burgled while he celebrated the team winning the title at Anfield.

Jewellery and a grey Audi RS6, which was later recovered in Wigan, were stolen.

Merseyside Police said it is not currently linking the burglary on Mr Ancelotti’s home to any other incidents.

A spokesman for Everton confirmed that Mr Ancelotti would still be managing today’s game, which is due to kick off at Goodison Park at 7pm.

He said neither the club nor the manager would be commenting on the burglary.